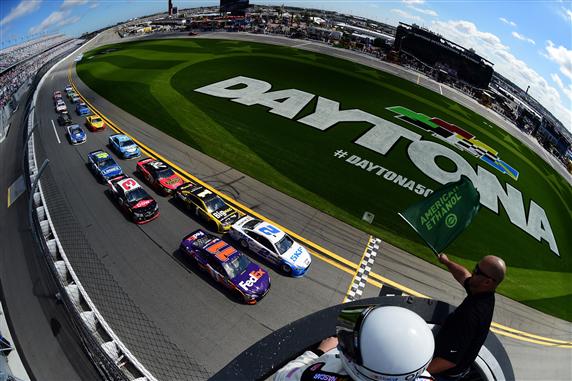 Here are my 10 BOLD predictions for the 2018 NASCAR Season…

No car has been faster than the No. 24 car at the start of the last five Daytona 500s. It did not matter if the car was driver by Jeff Gordon or Chase Elliott. It consistently started the Great American Race on the front row. The reason for the speed had a lot to do with crew chief Alan Gustafson’s ability to set up a car for Superspeedway tracks. The No. 24 car has won the pole for the Daytona 500 in 2017, 2016, 2015 and it qualified 2nd in 2013. That is what you call a fast racecar!

As fast as Gordon and Elliott were in qualifying, they had a hard time getting the car to Victory Lane. This year the number will change (Elliott will drive the No. 9 car made famous by his father Bill Elliott), but the speed will remain.

Elliott was leading the Daytona 500 last year with only three laps left. He lost his lead when he ran out of gas. Elliott had the most dominant car last year and it will be the same in 2018, but this time Elliott wins his first race in the MENCS and it is the Daytona 500.

Last year I predicted Kyle Larson would make the Final Four at Homestead Miami Speedway. He had a great season but ran into a lot of bad luck in the playoffs. This year I am taking my prediction with Larson one step further and making the BOLD prediction that Larson will win the 2018 MENCS Championship.

Larson had a career year in 2017. He won four races and was consistently one of the cars to beat. I expect Larson to start off slow in the new Chevy Camaro ZL1 chassis, but it will not take him long to adapt to the aerodynamics of the new car. Just like Tony Stewart, Larson can drive any type of car.

Chip Ganassi Racing brought in former Hendrick Motorsports executive Doug Duchardt to oversee the operations of the team. They also brought in Max Jones and Mike Hull from the Indy Series teams to help with the engineering of the cars. It seems like Chip Ganassi Racing is going all in this season. The team is bringing the best minds in racing together to make sure the No. 42 car runs up front.

No driver gets around Homestead Miami Speedway as well as Larson. He led 145-laps and finished 3rd last year and led 132-laps and finished 2nd in 2016. If Larson makes his way into the Final Four, he will be the favorite to take home the 2018 MENCS trophy.

Last year Toyota introduced a new Camry chassis to the MENCS. It took a while for the Toyota teams to get rolling but once they did it was hard to beat them to Victory Lane. This year the new Chevy Camaro ZL1 car will make its debut in the Daytona 500. So far there have been rave reviews about the aerodynamics of the new Camaro. Eight Chevy drivers tested the car at Las Vegas Motor Speedway and they all said the car will be an improvement over the Chevy SS used in previous seasons.

NASCAR fans should expect the same from the Chevy teams as what they saw from Toyota in 2017. The Chevy teams most likely will lack some speed early in the season but once they figure out how to make downforce with the new car, they could be unstoppable. Hendrick Motorsports, Chip Ganassi Racing and Richard Childress put a lot of time and a lot of money into the Camaro. I would be shocked if the Chevy teams did not run well this season.

Last year we saw Dale Eanrhardt Jr. and Matt Kenseth exit the sport and two young drivers fill their seats (Alex Bowman and Erik Jones). The same could happen to Kurt Busch at the end of the 2018 season.

Busch signed a one-year extension with Stewart-Haas Racing. The negotiations on the contract were not exactly smooth sailing. Both Busch and SHR knew the contract would expire at the end of the 2017 season. It took the driver and organization until December to reach a deal.

Cole Custer is a young driver and a protégé of Tony Stewart. It is only logical that the young driver will be in the seat of the No. 41 car in 2019. The question is… Will Busch be able to find a ride with another team or will he be forced out of the sport like Matt Kenseth was?

Unfortunately injuries have become a part of NASCAR. Tony Stewart was forced out of his car in 2014 due to a dirt track accident. Kyle Busch missed the first 11 races of the 2015 season because of a leg injury he suffered in an Xfinity Series race at Daytona. Dale Earnhardt Jr. stepped out of the No. 88 car for 18 races in 2016 as a result of concussion symptoms. And last year Aric Almirola was involved in a horrific accident at Kansas Speedway and as a result he missed some time as well.

Replacement drivers have become more frequent the past five seasons then they were in the past. The trend shows that a driver will be forced from the car in 2018. The first call that any owner will likely make is to Matt Kenseth.

It is no secret that Kenseth was not ready to give up his seat in the No. 20 car. He has said he would entertain the idea of driving again if a good opportunity presented itself. If any of the drivers from the major teams are forced out of their cars in 2018, my BOLD prediction is that Matt Kenseth will make a return to the MENCS.

Raise your hand if you remember the last time we saw Clint Bowyer in Victory Lane. I am guessing that many of you did not raise your hand. The last time Bowyer won a race was in 2012 at Charlotte while racing for Michael Waltrip Racing.

Last year I predicted Kasey Kahne would end his winless drought and he did with a trip to Victory Lane at Indianapolis. My BOLD prediction is that Bowyer will get his first win since 2012 this season.

The best track for Bowyer to get back to Victory Lane is at Sonoma. Stewart-Haas Racing has won the last two races at the track (Tony Stewart in 2016 and Kevin Harvick in 2017), so they know how to setup cars for this track. Bowyer is no stranger to Victory Lane at Sonoma. He won the race in Wine Country in 2012. My BOLD prediction is that he does it again in 2018.

There have been 1000s of driver who made their debut in NASCAR since the sport began. Only 20 of them have won a race in their first season. The last to do it was Chris Buescher in 2016. My BOLD prediction is that William Byron will make it 21 drivers to win a race in their rookie season.

The competition is getting tougher each season in the MENCS. There is a youth movement in the sport, but these young drivers are good enough to win races. Martin Truex Jr. and Kyle Busch will get a handful of wins in 2018, but my BOLD prediction is that no driver will win more than five races.

Joe Gibbs Racing will look a lot different in 2018. There will be two veterans (Kyle Busch and Denny Hamlin) and two young drivers (Daniel Suarez and Erik Jones). Everyone expects the Busch and Hamlin will be the two drivers who lead the JGR organization in 2018. That may be the case early in the season but my BOLD prediction is that Erik Jones takes over as the second-best driver on the team.

Jones had a lot of success in his rookie season. He had five finishes in the top five, 14 finishes in the top 10 and led 310 laps. He did all of this while driving for a team that was in their first season on the track. The No. 20 team has been around for a long time and I expect Jones to make it to the elite level in the MENCS.

Jones has a close relationship with Kyle Busch. The two drivers have similar driving styles and I think having Busch around every day to lean on will really help Jones this season. I would not be surprised if Jones not only wins his first race, but makes it to Victory Lane multiple times in 2018.

The was a lot of panic in the fantasy community when it was announced their games were being taken away, but my BOLD prediction is that fans will forget all about the Yahoo and Fox games once they start playing the two replacement games.

Do you have a Bold Prediction for the 2018 Season? Let me know on Twitter: @MrFantasyNASCAR