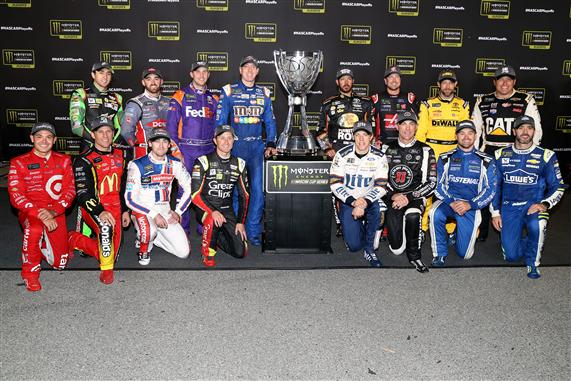 The 2017 NASCAR Playoffs kick off this week at Chicagoland Speedway. The drivers who won a race in the regular season, plus the drivers in the top 16 in the point standings will compete for the inaugural Monster Energy Cup Trophy.

Round of 16: Chicago, New Hampshire and Dover

Round of 12: Charlotte, Talladega and Kansas

Round of 8: Martinsville, Texas and Phoenix

Chicago Race Winner: Martin Truex Jr. is my pick to win. Truex is on a mission to win the 2017 championship. If you look at the picture of the 2017 Playoff drivers you can see how pissed he looked after not winning the race at Richmond. I think he makes a statement to the field in the opening race.

New Hampshire Race Winner: Matt Kenseth has been the best driver at Louden the last two seasons and he is my pick to win. He swept the races at the track last year and finished 5th in the race last July. Kenseth gets one more trip to Victory Lane before he leaves Joe Gibbs Racing.

Dover Race Winner: Kyle Larson finished 2nd in the first race at the Monster Mile but this time he goes to Victory Lane. Larson is very good on the high banked ovals. He will secure his spot into the round of 12.

Charlotte Race Winner: Martin Truex Jr. is the obvious pick and I see no reason to pick against him. No driver has dominated a track the last two seasons the way Truex has dominated at Charlotte. Truex cruises into the round of 8.

Talladega Race Winner: Dale Earnhardt Jr. wins one last race before he retires and it comes at the track he loves.. Dega. This means another driver will advance to the round of eight on points since Earnhardt is not in the playoffs.

Kansas Race Winner: Martin Truex Jr. continues his dominance of the 2017 playoffs with another trip to Victory Lane. He led 104 laps and won the spring race at the track. Truex picks up where he left off with another win.

Texas Race Winner: Jimmie Johnson will probably be counted out of the playoffs as the series rolls into Texas and then the No. 48 team surprises everyone and wins for the 8th time in the Lone Star State.

Phoenix Race Winner: Kyle Larson came close to winning the first race at Phoenix and this time the young drivers understands how to get to Victory Lane. Larson finished 3rd at Phoenix in the fall race last year and 2nd in the spring race this season. He secures his spot in the championship race with his win.

Driver advance one points: Martin Truex Jr. (He takes it easy because his spot is already locked in by the time the series reaches this round)

My prediction is that Martin Truex Jr. dominated the entire season but the No. 78 team takes their foot off the gas pedal in the Round of 8 because Truex has his spot in the championship already locked up. The team then runs well at Homestead but not good enough to beat the driver who has dominated the last two races at Homestead.

I wrote in my 10 Bold Predictions for 2017 article that Kyle Larson would make the final four. It sounded like a stretch in February but he is the 2nd-highest favorite as the playoffs begin. I wrote that Larson will be dangerous if he ever got to the final four at Homestead. Larson finished 5th at Homestead in 2016 and 2nd last year. He also led 132 of the 268 laps. Larson will become the 3rd youngest driver to win the championship (Bill Rexford was 23 and Jeff Gordon was 24 when they won the title).

Kyle Busch starts the season slow but finishes the last half of the season as one of the best in the sport. He chases Kyle Larson to the checkered flag at Homestead but comes up just short. Busch finishes 2nd to Larson.

Jimmie Johnson gives the NASCAR writers some material for the last race as he has a chance to break Richard Petty and Dale Earnhardt’s record and wins his 8th championship. He comes up short and finishes in the top 10 at Homestead.

What are your thoughts? Visit my Fantasy NASCAR FB Page to post your comments.