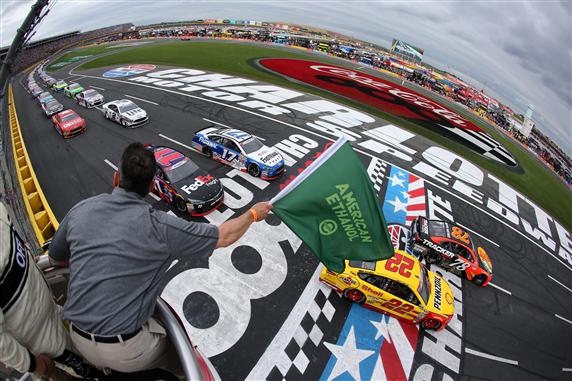 The Monster Energy NASCAR Cup Series travels to Concord, North Carolina this week for the Coca-Cola 600. The race can be seen Sunday night at 6 p.m. ET on Fox. Be sure to test your knowledge of NASCAR by competing in the Fox Sports Fantasy Auto Racing game.

My picks are 15th overall in the Fox Sports Fantasy Auto Racing game. Be sure to check out the leaderboard to see where your picks rank against the competition.

There have been four races on the 1.5-mile tracks (Atlanta, Las Vegas, Texas and Kansas) this season. The drivers who have run well at these tracks will be the favorites to finish up front Sunday. Be sure to check out which drivers are the leading scorers in the Fox Sports Fantasy Auto Racing game on the intermediate tracks this season.

The Coca-Cola 600 is a unique race. Charlotte is one of the only tracks where fantasy players get to see the drivers compete on the track before the points race begins (this also occurs before the Daytona 500). The Monster Energy NASCAR Cup Series held their All-Star race last week at Charlotte Motor Speedway. Kyle Larson, Jimmie Johnson, Kyle Busch and Kevin Harvick ran well in the race and their success should translate into a good finish Sunday night.

The length of the Coca-Cola 600 also makes this race unique. It is the longest race of the season and there is plenty of time for drivers to make their way from the back to the front. Track position will not be important this week.

The scoring system for the Fox Sports Fantasy Auto Racing game rewards drivers who improve their position in the race more than the drivers who lead the most laps so selecting drivers who start up front will not help your team. In order to score as many position differential points as possible select drivers who start outside the top 10 Sunday

Martin Truex Jr. ($10,300) was the class of the field in this race last year. He led 392 of the 400 laps in one of the most dominating wins in NASCAR history. Truex has won five of the last 11 races on the 1.5-mile tracks. He leads the series in average finishing position, laps led and driver rating in races similar to Charlotte. Truex may not lead 98 percent of the laps again, but the No. 78 car should be in Victory Lane Sunday night.

Kyle Larson ($13,600) has scored more points in the Fox Sports Fantasy Auto Racing game on 1.5-mile tracks than any other driver. He has a third-place average finishing position on intermediate tracks this season. This will be Larson’s fourth time running the Coca-Cola 600. He only has one finish in the top-10 in those races, but the No. 42 team has never been running as well as they are in 2017. Larson should add another top-five finish to his resume this week.

Jimmie Johnson ($12,100) needs one more win in the Coca-Cola 600 to match Darrell Waltrip with five wins in the NASCAR marathon event. His last win in this event came in 2014 when he started from the pole and led 164 laps on his way to Victory Lane. Johnson won on a similar track at Texas earlier this year and he won the last race at Charlotte. The No. 48 team will be a factor at the end of the race Sunday.

Brad Keselowski ($12,000) has been the most consistent driver this season. He has two wins (Atlanta and Martinsville) and finished nine of the 11 races in the top 10. Keselowski has an average finishing position of 2.5 on the 1.5-mile tracks this season. The No. 2 team is the best at working on their car and getting it up front at the end of the race. Keselowski will have a good chance to win his first Coca-Cola 600 Sunday night.

Kevin Harvick ($11,200) runs well on the 1.5-mile tracks and Charlotte is one of his best. Harvick has finished four of the last six races at the track in the top two. He has not been as strong this season as he has been in the past but his third-place finish at Kansas shows that the No. 4 team is starting to dial in the new Ford chassis. Harvick should be in the top five at the end of the race this week.

Chase Elliott ($10,000) will have a good chance to get to Victory Lane for the first time this week. The Coca-Cola 600 is notorious for producing first-time race winners. Some of the drivers who won their first race at Charlotte include David Pearson (1961), Jeff Gordon (1994), Bobby Labonte (1995), Matt Kenseth (2000), Casey Mears (2007) and David Reutimann (2009). Elliott competed in his first Coca-Cola 600 last year. He started 12th and finished eighth. I would not be surprised if he was in Victory Lane Sunday night.

Trevor Bayne ($8,400) is having the best season of his career. He has been one of the best Value Picks in the game this season. Bayne finished all of the races on the 1.5-mile tracks in the top 13. He has outscored Kyle Busch, Kevin Harvick, Joey Logano and Kurt Busch (to name a few) in the Fox Sports Fantasy Auto Racing game on tracks similar to Charlotte. Bayne is worth a spot in your lineup this week.

Ricky Stenhouse Jr. ($8,100) is another Roush Fenway Racing driver who is having a career year. He won his first race in the Monster Energy NASCAR Cup Series at Talladega and followed it up with an 11th-place finish at Kansas. Stenhouse has finished two of his five starts in the Coca-Cola 600 in the top 13. This week he should get his first finish in the top 10 in the race.

Ryan Blaney ($7,600) had his best race of his career two weeks ago at Kansas. He won the pole, led 83 laps and finished fourth. The No. 21 car has had a lot of speed this year. Blaney had a hard time finishing the races as well as he ran in the race. He showed a lot of improvement at Kansas. I would not be surprised if Blaney had a similar race this week to what he had two weeks ago in Kansas.

Erik Jones ($5,900) is probably happy to be leaving Kansas. He had a fast car and ran most of the race in the top 15, but he also spun out three times. Kansas Speedway is more difficult to drive than Charlotte Motor Speedway because of the high winds in Kansas. Jones should have one of the fastest cars this week since it should be setup similar to his teammate’s (Martin Truex Jr.) car. Jones is a great Value Pick for under $6K this week.

Here are my pre-qualifying picks for the Coca-Cola 600: