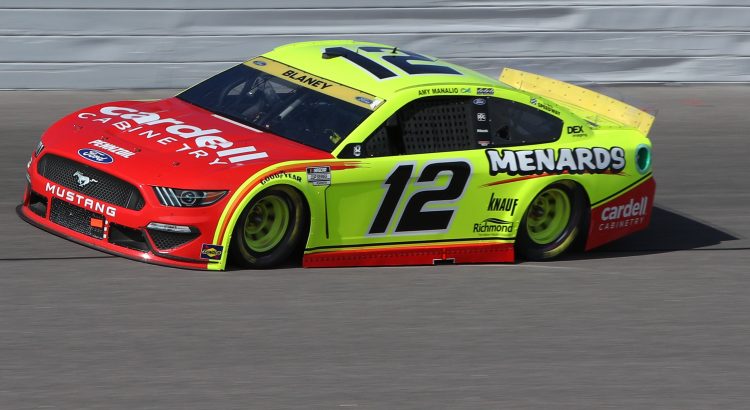 The NASCAR Cup Series will travel back to Atlanta Motor Speedway Sunday. This will be the first time the Gen-7 car has competed at a track for the second time. Will we get a repeat of the first race at Atlanta? I doubt it. The race Sunday is 100 miles shorter and the teams have an expanded notebook to work with. The Quaker State 400 will have the 510 horsepower engines with the 7” spoiler this week. This is the Superspeedway aero package used at Daytona and Talladega. This race should be wide open and have a good chance to see another new winner in Victory Lane. It should also have a good chance for a long-shot to be on the winning ticket.

The Best Bets have been on fire. They won with Joey Logano (16-1) at WWT Raceway, Daniel Suarez (25-1) at Sonoma and Tyler Reddick (25-1). That is three winners in the last four races. It is also a clean sweep of the road courses this year since the picks hit with Ross Chastain at 25-1 at COTA. .The race Sunday is going to be tougher to predict but I will do my best to get us another winning ticket in Atlanta. 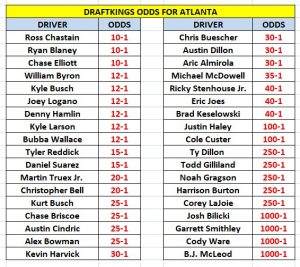 ** The first number is the amount of money based on the second number (the amount of the wager). So if you bet $1 on Chase Elliott, you will win $10.

Here are my best bets for the Quaker State 400…

ROSS CHASTAIN (10-1): The 2022 season has been the most unpredictable in the history of NASCAR. The only thing that has been consistent in the Cup Series this year has been the No. 1 car running in the top-10. Chastain had the sixth-best driver rating (101.6) and finished 2nd at Atlanta in March. We know Chastain is going to run up front Sunday. I will bet that he can win the race.

RYAN BLANEY (10-1): The Cup Series has had 13 winners this year. Blaney is the most likely driver to add his name to the list if it is going to be expanded to 14 drivers. He is the best driver in the Cup Series on the Superspeedways (Denny Hamlin has too many penalties, so now the crown goes to Blaney). The No. 12 car had the second-best average running position (8.11) and the third-best driver rating (105.4) at Atlanta in March. Blaney should have a good chance to win Sunday.

DANIEL SUAREZ (15-1): I am all in on the Trackhouse Racing drivers this week. They are the only team that has shown consistent speed at every type of track. There were two drivers at Atlanta in March who scored Stage Points in both Stages and spent the entire race in the top-10. They were William Byron (the race winner) and Suarez. He finished 4th at Atlanta in March. I will bet he can improve by four spots Sunday.

KURT BUSCH (25-1): The first driver I usually select for my Fantasy NASCAR lineups and betting slips when the Cup Series races at Atlanta is Kurt Busch. Atlanta has been his best track. Busch has four wins in the ATL. I know the track is completely different from what it has been in the past because of the repave, but Busch doesn’t seem to know that. He finished 3rd at Atlanta in March. He already won at a 1.5-mile track this year (Kansas). I will bet he can do it again Sunday.

LONG SHOT SPECIAL: KEVIN HARVICK (30-1): Remember when Harvick used to dominate the races at Atlanta? He was so good at this track that the other teams called the fast way around Atlanta “Harvicking”. The track is completely different now but I will bet Harvick can find some of that magic at Atlanta Sunday. He desperately needs a win since he is now outside the playoff cut-line. The No. 4 team will take every chance possible to win this race. We all know anything can happen on a Superspeedway, so why not take a chance with a driver with three wins at the track?