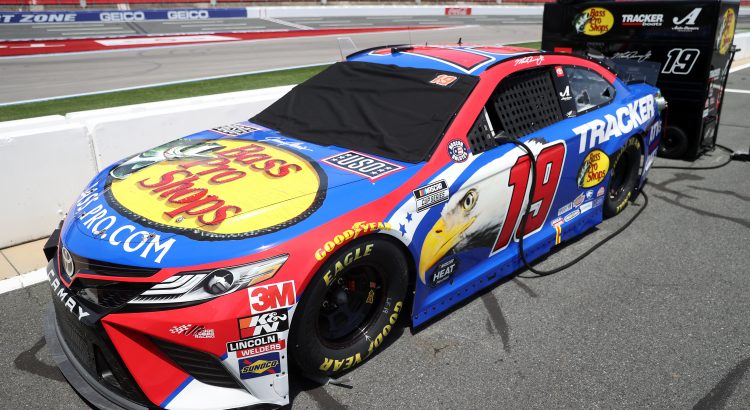 The NASCAR Cup Series will celebrate Memorial Weekend at Charlotte Motor Speedway. This will be a home race for most of the teams and they will need it. The Coca-Cola 600 is the longest race in motorsports so the drivers and pit crews will need a nice nap after this marathon race. The Coca-Cola 600 can be seen Sunday at 6 p.m. ET on FOX.

The drivers and teams need a fast car and need to be mistake free Sunday. There will be at least 14 pit stops and I expect more lead changes than usual. My betting portfolio this week will consist of a lot of the favorites. I just do not see any driver with odds outside of 25-1 making it to Victory Lane Sunday night.

DRAFTKINGS ODDS FOR THE COCA-COLA 600 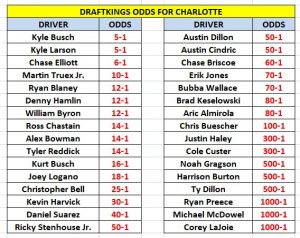 ** The first number is the amount of money based on the second number (the amount of the wager). So if you bet $1 on Kyle Busch, you will win $5.

Here are my best bets for the race at Charlotte…

KYLE BUSCH (5-1): Kyle Larson and Kyle Busch are the favorites this week and they should be. Larson won this race last year and Busch has been one of the best on the 1.5-mile tracks this year. I am betting on Busch to win because of the length of the race. The drivers are going to need to make a lot of pit stops and Busch has the fastest pit crew in the history of NASCAR. They changed all four tires and filled the car full of fuel in less than nine seconds at Kansas. That kind of speed combined with the speed Joe Gibbs Racing had at Kansas should give Rowdy a great chance to win Sunday. It also helps that he gets a practice race since he is running the Truck Series race Friday night.

CHASE ELLIOTT (6-1):  Elliott has been the best driver at Charlotte over the three seasons and it is not even close. His 2.3 average finishing position at this track is five spots better than any other driver in the field. Elliott finished 2nd, 1st and 2nd in his last three races at the oval track at Charlotte. I will not win a lot at 6-1 odds, but I still think Elliott is a good bet this week.

WILLIAM BYRON (12-1): This is a home race for Byron. The Charlotte native has been good at his home track. He won the Cup Series race at Charlotte in 2019 and he finished fourth last year. Byron has led the most laps on the 1.5-mile tracks this year and his 7.3 average finishing position is fourth-best. Byron has two wins already this year. I will not be surprised if he adds another win Sunday night.

ROSS CHASTAIN (14-1): I can almost leave what I say about Chastain in every Best Bets article. The sportsbooks continue to leave the No. 1 car at double-digit odds and Chastain continues to run up front. His fourth-place average finishing position on the 1.5-mile tracks this year is the best in the Cup Series. He has also led the second-most laps (124) behind William Byron. Chastain is going to be fast this week. If his team can avoid mistakes, he should have a good chance to win the Coca-Cola 600.

ALEX BOWMAN (16-1): The Coca-Cola 600 seems to be a race that fits Bowman’s driving style. He is really good at saving his tires and each season Charlotte Motor Speedway loses grip. He is also good at avoiding mistakes and that has allowed Bowman to sneak into Victory Lane more frequently than he should have. Bowman won at Las Vegas earlier this year so I will bet that he can do it again Sunday night.

LOG SHOT SPECIAL: CHRISTOPHER BELL (25-1): I am not digging too deep for my long-shot special this week. I thought about selecting Austin Cindric at 50-1 odds but I just do not think he has the experience to win Sunday. Bell has everything he needs to win this week. The No. 20 car was one of the fastest in the field at Kansas and Bell quickly made his way to the front at Texas. His crew chief (Adam Stevens) has won this race before. He will setup a car fast enough and use the best pit strategy to keep Bell up front. He is a great bet at 25-1 odds at Charlotte.