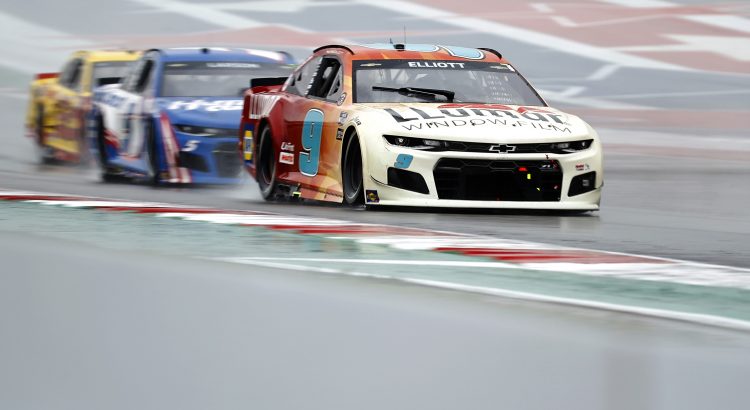 The wild 2022 NASCAR Cup season is though five races and it has been tough to predict a winner. The average odds of the drivers in Victory Lane this year is 19-1. It would be a lot higher if Kyle Larson would not have won at Auto Club at 4-1 odds.

It may be tougher to get a long-shot into Victory Lane Sunday. Chase Elliott (2-1 odds) and Kyle Larson (3-1 odds) have won nine of the last 12 races on the road course. Hendrick Motorsports has also won three of the five races. The odds suggest Elliott or Larson will be in Victory Lane Sunday but you are not going to win any money by wagering on the No. 9 or No. 5 cars. There are some other drivers who offer more value. 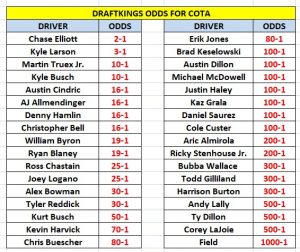 ** The first number is the amount of money based on the second number (the amount of the wager). So if you bet $1 on Chase Elliott, you will win $2.

Here are my best bets for the Echopark Texas Grand Prix…

AJ ALLMENDINGER (16-1):  I’ll give you Chase Elliott and Kyle Larson and I will take Allmendinger at any road course if the cars are equal. The problem with Allmendinger is that he has never had the best car in the field, but the Gen-7 car is closing the gap between the teams. Allmendinger won at the Indianapolis Road Course in the Cup Series last year. The Kaulig Racing cars are faster than what Allmendinger had in that race. Allmendinger finished fifth at COTA last. I will bet that he wins the race Sunday.

ROSS CHASTAIN (25-1):  Chastain is not the first driver that comes to mind when people think of road course races, but he wasn’t at the top of the list at Las Vegas, Phoenix or Atlanta either. All Chastain has done in his last three races is finish second (Atlanta), second (Phoenix) and third (Las Vegas). The No. 1 car has been knocking on the door of Victory Lane this year. That door could be opened Sunday. Chastain finished fourth at COTA last year. His team is way ahead of where they were in 2021.

JOEY LOGANO (25-1): I could not believe the odds on Logano when I first saw them. I know Logano has not won at a road course since his win at Watkins Glen in 2015, but it is not like the No. 22 car hasn’t been close to winning. Logano finished second (Daytona Road Course), third (COTA) and fourth (Sonoma) last year on the road course. Logano is second in the NASCAR Points Standings, so it is not like he is having a poor season. I will take the 25-1 odds on Logano Sunday.

TYLER REDDICK (30-1): It will not be long before Ross Chastain or Reddick win a race. I am going to keep betting these two cars until they find Victory Lane. I really like that the DraftKings Sportsbook continue to give these two drivers log odds to win the race. Reddick won the pole at COTA last year and he finished ninth. Reddick also finished second at the Charlotte Roval last year. The No. 8 car has a lot of speed and Reddick has a lot of talent. I would not be surprised if he won the race Sunday.

Long Shot Special: KURT BUSCH (50-1): OK….don’t look at the name… What if I were to give you the driver who has the best average finishing position in the Cup Series this year (9.6), has won at a road course before (Sonoma), has the most top-10 finishes on road courses (26) and the second-most top-five finishes on the road courses (14) at 50-1 odds. Would you take it? I will through a few bucks on Busch to win Sunday.