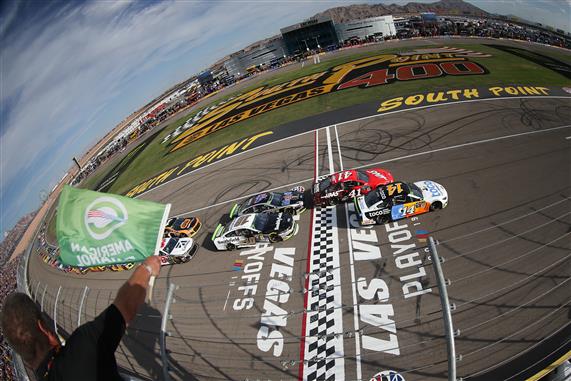 The NASCAR Cup Series travels across the country to compete at Las Vegas Motor Speedway Sunday night. The last race in Sin City was crazy. The cars were four-wide all the way around the track. Five drivers who did not make the playoffs this season, finished in the top 10. We could see a long shot in Victory Lane if that happens again this week. 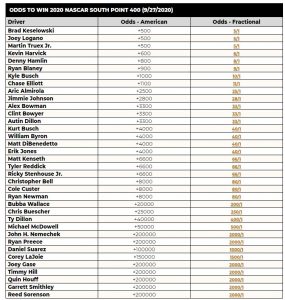 Joey Logano (5-1): Joey Logano is a co-favorite to win with his teammate Brad Keselowski and Martin Truex Jr. It should not surprise anyone that two Team Penske cars are the favorites to win since they have won 4 of the last 6 races at Las Vegas. I am going to take Logano over Keselowski for this race. Logano won the last race at Las Vegas and the race at this track last year. His average finishing position in his last four races at Las Vegas is 3.75. Not too bad. I will take a chance with the No. 22 car Sunday.

Kevin Harvick (6-1): Winning money from betting on NASCAR has become more difficult this year because the same driver seems to win every race. Kevin Harvick has won 3 of the last 5 races and 5 of the last 8 races. It is surprising that he is not a heavy favorite to win Sunday night since he starts on the pole, has the No. 1 pit stall and leads every stat category on the 1.5-mile tracks this season. I will take the No. 4 car at 6-1 odds.

Ryan Blaney (8-1): Wouldn’t it be ironic if Ryan Blaney won the race Sunday a week after he was in a “must win” situation? I would not be surprised. Blaney has been a beast on the 1.5-mile tracks this season. His average finishing position on these tracks is 6.9. He has also lead laps in every race except one (the Coca-Cola 600). I will put a few dollars on Blaney this week at 8-1 odds.

Chase Elliott (11-1): Chase Elliott is my favorite bet this week. When I saw the odds for the first time I thought it was a mistake. Elliott had the best car at Las Vegas in February. He led the second-most laps (70), won both Stages, but his tire went down with 46 laps left in the race. Elliott had a great chance to win that race and he should be fast again Sunday night.

Austin Dillon (33-1): I have been betting Austin Dillon in every race in the playoffs and he has come close but that doesn’t help me. I will give him one more shot Sunday night. Dillon finished 4th at Las Vegas in February and he just won at Texas in July. The No. 3 team has a super computer that tells them the best strategy to use to get to Victory Lane. It worked at Texas and I am hoping it works Sunday night.

Cole Custer (80-1): Cole Custer will be my $2 roll of the dice in Sin City. He looked like crap in the last race at Las Vegas but he has learned a lot since February. The most similar track to Las Vegas is Kentucky. Goodyear will use the same tire this week that they used in that race and guess who was in Victory Lane in the Bluegrass State? Yes, it was Custer. He did not use strategy to win either. He flat out passed Kevin Harvick and Martin Truex Jr. for the win. Maybe he can do it again.