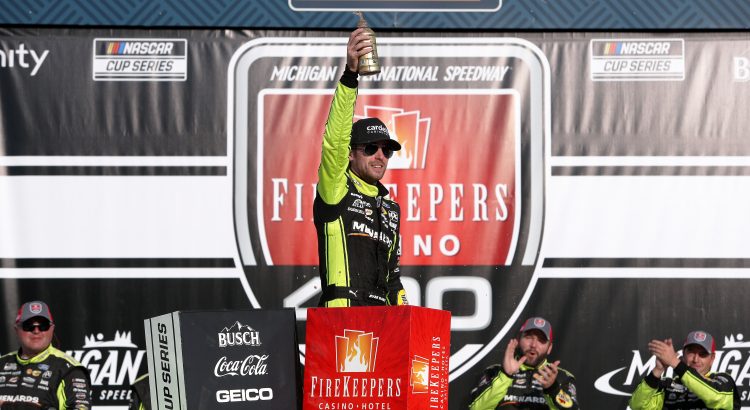 The NASCAR Cup Series will compete at Michigan International Speedway this week. This will be the second race for the Cup Series on a 2-mile oval. The last race was in February at Auto Club speed. A lot has happened since that race and the teams have a lot more data from the Gen-7 car to work with this week. The races at Michigan have not been too tough to handicap though. The drivers who can search the track for grip have the best chance to get to Victory Lane. This should be a good race to bet on. The FireKeepers Casino 400 can be seen Sunday at 2:30 p.m. ET on USA Network..

Do you like racing when the race is in the hands of the driver? If so, the race at Michigan is for you. Michigan is a wide 2-mile D-shaped track. There are many lanes for drivers to find speed for their car and some drivers will ride along the wall so they can “keep the hammer down” during the race. There are a handful of drivers who typically run well at Michigan and these are the drivers I will be betting on Sunday. 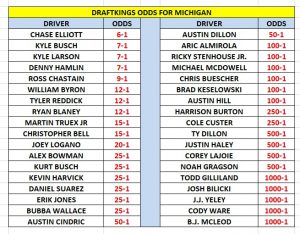 ** The first number is the amount of money based on the second number (the amount of the wager). So if you bet $1 on Chase Elliott, you will win $6.

Here are my best bets for the FireKeeper Casino 400…

KYLE LARSON (7-1): Larson dominated the Cup Series last year but he has only been able to find Victory Lane once in the Gen-7 car. That could change this week. Larson has won five races on the 2-mile ovals, including the race at Auto Club in February. His dirt track racing background makes Larson one of the best drivers in the field at searching the track for grip and running up against the wall. It has been a while since Larson won a race but I will bet that he can win Sunday.

TYLER REDDICK (12-1): Reddick will have some momentum after his win last week at the Brickyard. He should also be confident heading into the race at Michigan. Reddick ran up front at Michigan last year before spinning out in the final laps. He also dominated the race on the 2-mile oval at Auto Club Speedway in February. Reddick led 90 of the 200 laps before damage from hitting the wall too many times caught up with him. Reddick will once again run up against the wall and be a threat to win Sunday.

CHRISTOPHER BELL (15-1): Bell said after his win at New Hampshire that he expects to win another race this year and he mentioned Michigan as the race he thinks he can win. Bell has been very consistent on the large oval tracks this year. He finished 10th at Las Vegas, 5th at Kansas and 5th at Charlotte. Bell was also running in the top-10 at Auto Club before his engine blew up. Bell is very good at searching the track for grip so he should be a good pick to win the race Sunday.

JOEY LOGANO (20-1): Which Logano are we going to get Sunday? The Logano who won at Darlington and Gateway or the Logano who finished 20th at Charlotte and 26th at Atlanta? It is tough to trust Logano in our Fantasy NASCAR lineups, but he is worth betting on at 20-1 odds. Logano participated in a two day test at Michigan in May so the No. 22 team should unload with some speed. Logano finished fifth at Auto Club in February, so he has been good in the Gen-7 car on a 2-mile oval. Logano also won at Michigan in 2019 so he knows his way to Victory Lane at this track. I will put some money down on Logano this week.

LONG SHOT SPECIAL: AUSTIN DILLON (50-1): The No. 3 car has looked horrible this year but this is the 2022 NASCAR Cup Series season… anything can happen. Dillon had one of his best races last year at Michigan. He finished 3rd in Stage 1, 6th in Stage 2, before Brad Keselowski punted him into the wall (Yes, this is where the battle between Keselowski and Dillon began). Dillon also had the best race of 2022 at another 2-mile oval. Dillon started 16th and finished 2nd at Auto Club in February. Dillon participated in the two day tire test at Michigan in May so he should have an idea of how the tires will wear over a long-run Sunday.