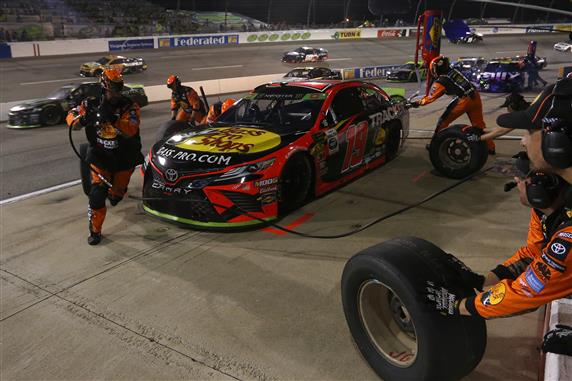 The NASCAR Cup Series will compete under the lights Saturday at Richmond Raceway. The first race at this track was canceled and that sucked. This is one of my favorite tracks. I think the short, flat tracks produce some of the best racing. It requires a car that has a good balance of speed and handling. The cream usually rises to the top at Richmond so it may be difficult to hit on any long shots Saturday night. 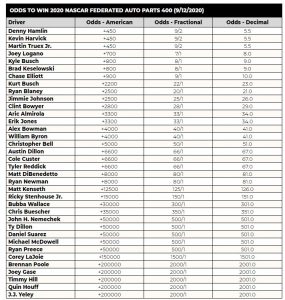 Kevin Harvick, Denny Hamlin and Martin Truex Jr. (9/2): The three favorites are going to be tough to beat Saturday night. Harvick starts on the pole and has the No. 1 pit stall. Hamlin has been on fire this season and he is very good at his home track. Truex won the last two races at Richmond and he has led over 100 laps in five consecutive races at this track. If I could only bet on one of them, it would be Truex.

Brad Keselowski (8-1): If any driver is going to beat the three favorites to the checkered flag, it should be Brad Keselowski. The most similar track to Richmond is New Hampshire. Keselowski just dominated the race at the Magic Mile last month. Keselowski is my favorite bet this week because we get a chance to win a little more money with the No. 2 car.

Kyle Busch (8-1): Will Kyle Busch go winless in 2020? It has been a crazy year, but that would be unbelievable. If Rowdy is going to get to Victory Lane in the playoffs, it will likely happen Saturday night. Busch has finished 1st, 1st, 8th and 2nd in his last four races at Richmond. He gets a practice race Saturday in the Xfinity Series and that should help him out a lot.

Erik Jones (33-1): Erik Jones finished 38th at Richmond last year, so why is he one of my picks this week. The No. 20 car actually finished fourth but the car was disqualified for failing post race inspection. The No. 20 team is racing for their jobs. They had a fast car last year and I expect the same Saturday night. They desperately want to get to Victory Lane before the season ends.

Austin Dillon (66-1): Austin Dillon will be my $2 dart throw bet. The No. 3 team has had a lot more speed then people realized this season. Dillon shocked the field and won the race at Texas. He has a shot to do it again Saturday night. The No. 3 car starts 3rd so Dillon will have the track position he needs to run up front. Richard Childress Racing has a computer simulator that tells them what pit strategy to use to win the race. This computer has been pretty good this season at helping Dillon get up front. Richmond ranks as his 3rd best track so I will take a chance with him.