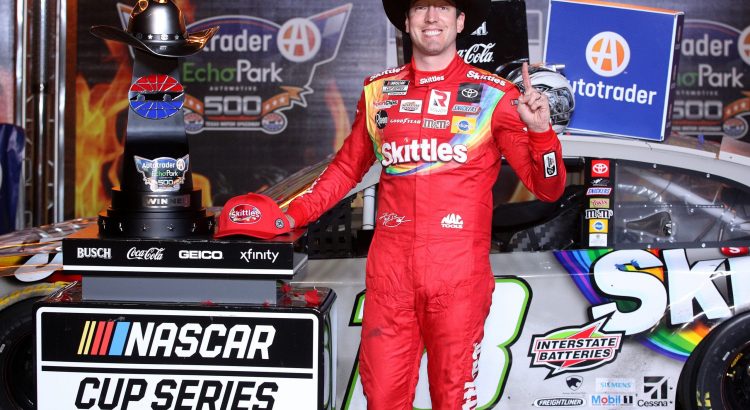 The Cup Series will travel back to Texas this week for the first race in the Round of Eight. The drivers who were lucky enough to survive Talladega and the Charlotte Roval will be happy to see two 1.5-mile intermediate tracks in this round. The gambling community probably will not be as happy to see Texas and Kansas coming up on the schedule. The two fluky tracks in the previous round provided an opportunity to win with a long-shot. That probably will not happen at Texas. The playoff drivers typically dominate the intermediate tracks in the playoffs. We will probably have a favorite in Victory Lane Sunday but that does not mean there is no value picks to take a chance with. 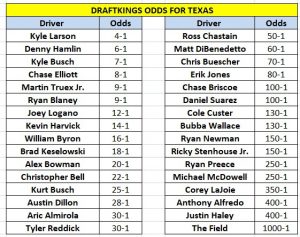 ** The first number is the amount of money based on the second number (the amount of the wager). So if you bet $1 on Kyle Larson you will win $4.

Here are my Best Bets for the Autotrader EchoPark Automotive 500…

Kyle Busch (7-1): Kyle Busch is the best pick in the field “on paper.”  He leads the Cup Series with a 2.8 average finishing position on the 1.5-mile tracks this year. That is insane. Rowdy won the race at Kansas (similar track to Texas), finished 2nd and 5th at Atlanta, finished 3rd in both races at Las Vegas and he finished 3rd at Charlotte. Busch leads the Cup Series with four wins at Texas, including the race last year. He will have a good chance to make it win No. 5 Sunday.

Chase Elliott (8-1): Chase Elliott will have to wait a little longer before he can have a “Happy Christmas and Merry Offseason.” It looked like his feud with Kevin Harvick would end his chances to win the title, but the champ is not dead yet. Elliott will have a good chance to win Sunday. The No. 9 car had the second-fastest Green Flag Speed (behind Kyle Larson) and the best Driver Rating in the All-Star Race at Texas. I am sure they will have a similar setup this week. Elliott got hot in this round last year. He could do it again in 2021.

Ryan Blaney (9-1): Ryan Blaney is always a good pick on the intermediate tracks. He finished 5th at Las Vegas last month, 5th at Atlanta in July and Blaney finished 5th at Texas in the All-Star Race. Blaney completely dominated this race last year. He won both Stages and led a race-high 150 laps. Blaney will have a great chance to win if the No. 12 team brings a car to the track with the same speed this year.

Long-Shot Special: My long-shot special this week will be Tyler Reddick (30-1). He has not been to Victory Lane in 2021, but he has been knocking on the door. Reddick has been good in the last two races on the 1.5-mile tracks. He finished 6th last month at Las Vegas and 6th in July at Atlanta. His teammate (Austin Dillon) won at Texas last year. I will take a shot with Reddick this week and hope he can have the same success that Dillon had last year.

* Austin (28-1) is a good long-shot bet too but I like Tyler Reddicks odds more and he has been better than Dillon this year. The Richard Childress Racing cars are both worth a spot in your betting portfolio this week.