The 2022 PGA Tour regular season is complete and now it is time for the golfers to play for some real money. The PGA Tour playoffs begin this week in Memphis, Tennessee at the FedEx St. Jude Championship. The top 125 golfers in the FedEx Points Standings will tee it up at TPC Southwind this week. This course hosted the World Golf Championship last year but it was added to the playoff schedule for the 2022 season.

TPC Southwind will be the first course in the playoff rotation. The course is a par 70 which plays 7,245 yards. Accuracy from tee to green will be important this week because there is a lot of water on this course. No course on tour has seen as many balls in the water since 2003 as TPC Southwind. Golfers who can bomb it off the tee can take some of the water out of play. Scoring is usually down here so we want to fill our lineups with golfers who are accurate off the tee and accurate on their approach shots. Bogey Avoidance will be a key stat this week.

This course plays long. There are eight holes which are par 4s and play over 450 yards. Length off the tee is important but keeping it straight is the key to keeping the ball out of the water. Shots Gained Off-the-Tee is another key stat we need to focus on this week.

The greens this week are Bermuda grass. I will be looking at Stoke Gained Putting-Bermuda Grass this week. 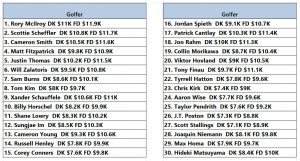 The field has 125 golfers this week and the top-65 and ties make the cut. That means roughly 55% of the golfers will be playing the weekend. That is a better percentage then how many golfers make the cut in a normal PGA Tour event. We are going to need 6/6 golfers to play the weekend if we want to cash our lineups Sunday.

The field is stacked this week so many strategies should work this week. I will play a “balanced lineup” for the Cash Contests. I want six golfers who will make the cut and have a good chance to finish in the top-15.

I will use a “stars and scrubs” lineup for most of my tournaments this week. I want some of the higher priced golfers who are accurate off the tee and can bomb it down the fairway. The cheap golfers are not really scrubs because they played well enough this year to make the playoffs. So these lineups will be more like, “stars and future-stars” lineup. 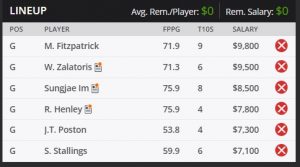 MATTHEW FITZPATRICK ($9,800): I will lead off my Cash Contest lineup with the golfer who ranks No. 1 in the field in Shots Gained Putting on Bermuda Greens. Fitzpatrick also ranks No. 7 in Ball-Striking, No. 4 in Shots Gained Tee-to-Green and No. 3 overall in the key stats. Fitzpatrick finished 4th at TPC Southwind in 2019 and 6th in 2020. His game is good enough to win this week.

WILL ZALATORIS ($9,500): I have the No. 1 putter in my Cash Contest lineup with Matthew Fitzpatrick. Why not pair him with the golfer who ranks No. 1 in the field in Shots Gained Approach. Zalatoris is one of the best ball-strikers in the game. It all comes down to putting for Willy-Z. He proved last year with his 8th-place finish that he can roll the rock on these greens. His 2nd-place finishes in the U.S. Open, PGA Championship and the Masters proves Zalatoris can excel in loaded fields. (I am not worried about Zalatoris firing his caddy last week and having a new guy on the bag).

SUNGJAE IM ($8,500): I had a hard time decided between Sam Burns and Sungjae Im for this spot. Burns lost in a playoff at TPC Southwind last year so his course history is outstanding, but Im may be in the best form on tour. He finished 2nd over the last two weeks. Im also ranks No. 9 in Ball-Striking, No. 9 in Shots Gained Tee-to-Green and No. 6 overall in the Key Stats. The numbers suggest we play the hot hand with Im so that is what I will do this week.

RUSSELL HENLEY ($7,800): Henley is another golfer who enters the playoffs on fire. Henley finished 5th last week in the Wyndham and 10th the week before in the Rocket Mortgage. Henley also finished 7th at TPC Southwind in 2016 so he does have some course history. Correy Conners is probably the safer play, but I will play the golfer in excellent form.

J.T. POSTON ($7,300): Poston has been in his best form of his life this summer. He won the John Deere and finished 2nd in the Travelers. He also finished 21st last week at the Wyndham. Poston ranks No. 19 in Ball-Striking, No. 5 in Shots Gained Tee-to-Green and No. 4 overall in the Key Stats. He is just too cheap to pass up this week.

SCOTT STALLINGS ($7,100): I will continue the theme of playing golfers who are in good form and rank high in the key stats with Stallings. He finished 13th, 10th, 4th and 8th in his 4 tournaments this summer. Stallings also ranks No. 8 in Ball-Striking, No. 6 in Shots Gained Tee-to-Green, No. 7 in Shots Gained Approached and No. 13 overall in the key stats. All I need from Stallings is to make the cut. He made the cut the last three times he tee’d it up at TPC Southwind so that should not be a problem this week. 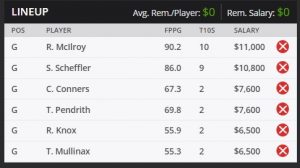 RORY MCILROY ($11,000): Mcilroy seems to be on a mission this year. He is my pick to win the $18M check. He should get off to a good start this week. Mcilroy finished 4th at TPC Southwind in 2019 and 12th last year. He also ranks No. 4 in Ball-Striking, No. 1 in Shots Gained Tee-to-Green, No. 8 in Shots Gained Approach and No. 1 in the overall Key Stats. I will pay up for McIlroy this week.

SCOTTIE SCHEFFLER ($10,800): I am not sure if most people will try to fit the two highest priced golfers into their lineups this week. If they do, they MUST hit on the scrubs. I am confindent in my “scrubs” so I will play Scheffler with Rory Mcilroy. Scheffler finished 14th and 15th in his last two trips to TPC Southwind. His form is better this year. Scheffler ranks No. 2 in Ball-Striking, No. 2 in Shots Gained Tee-to-Green, No. 2 in Shots Gained Approach and No. 2 overall in the Key Stats. McIlroy and Scheffler should be able to carry this lineup this week.

CORREY CONNERS ($7,600): The golfers say that TPC Southwind is a ball-striker’s paradise so Conners almost has to be in your lineup at $7,600. The Canadian ranks No. 5 in Ball-Striking, No. 10 in Shots Gained Tee-to-Green and No. 10 in Shots Gained Approached. Not bad, eh? Conners made the cut four times in a row at this course so he should be a safe play with upside this week.

TAYLOR PENDRITH ($7,600): I doubt Pendrith will be highly owned this week. He would be highly owned if you cover his name and just look at his stats. Pendrith has not finished outside the top-13 since March. He ranks No. 12 in Ball-Striking, No. 13 in Shots Gained Tee-to-Green, No. 7 in Shots Gained Approach and No. 12 overall in the Key Stats. Pendrith is a cheap golfer with a lot of upside this week.

RUSSELL KNOX ($6,500): Knox will be my first “scrub” in my Tournament Contest lineup. His form is decent. Knox has made the cut in his last three tournaments. Knox ranks No. 29 in Shots Gained Approach but when you dig a little deeper you will see he ranks No. 4 in proximity to the hole on his approach shots. That has been the secret to his game and if Knox can continue to knock down the pins with his approach shot, he should score well this week. 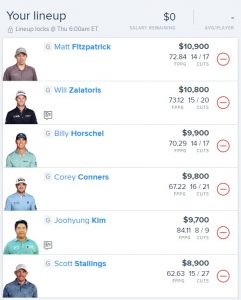 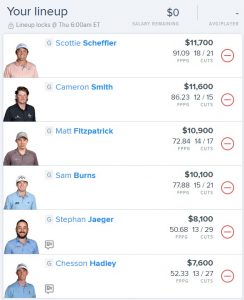 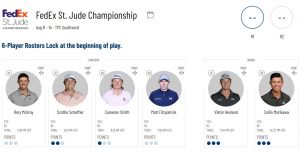 * This is the tenth tournament of 12 tournaments in segment four. Golfers are eliminated from the playoffs if they do not make it into the top-70 this week. I do not plan to save allocations in the playoffs. I am simply playing the best lineup I can and I will figure out the next tournament, next week.