The United States will face off against the Internationals in the 13th addition of the Presidents Cup. The strategies and picks for the President’s Cup scored well two years

The Presidents Cup is typically played every two years but it was canceled in 2021 because of the pandemic. Now it is back after three years and it will be much different since both teams lost talented players to the LIV Tour (LIV Tour Players are not allowed to play in the Presidents Cup). I still expect the Americans to have the advantage in this tournament.

The President’s Cup Quail Hollow Club in Charlotte, North Carolina (NASCAR Country). The players should be very familiar with this course because Quail Hollow has hosted the Wells Fargo Championship since 2003 and the course hosted the 2017 PGA Championship in 2017 (I know because I was there 😊).

Quail Hollow is a par-71 that plays 7,576 yards in length. Players will need to bomb it off the tee but more importantly they must be accurate. The rough can become difficult and the golfers must be on the correct side of the fairway to setup approach shots into these difficult greens. There is water on six holes that can come into play this week. I value distance and accuracy about the same for this tournament. The golfers who can bomb down the fairways and keep it straight will be the ones you will want in your lineup.

Here is the format for the event…

* The rules state that each player is required to only play in one match. So we want golfers who will be used a lot by their captains. We will not get any points if they are not playing. 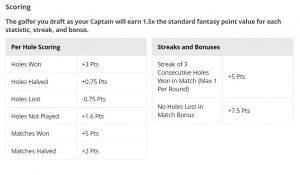 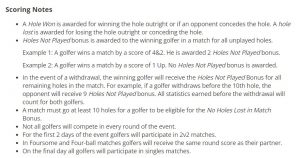 I had to wait to see the pairing before I selected my golfers for the DraftKings contests. We need golfers with the best chance to play all five rounds so I eliminated the golfers who are not playing Thursday from my list of core players. (The matchups will be announced Wednesday at 4 pm ET and my picks will be posted soon after that)

It is also important to remember that we receive points for the team. If Justin Thomas is teamed up with Jordan Spieth, we get their points if the win or halve the hole. If two golfers are likely to be paired together, we can save some salary by choosing the cheaper golfer from the team because both golfers with score the same points in the team events. So if JT is playing with Spieth, we can get the same points and save $2,600 by playing Spieth.

Another strategy we can use is stacking. If you think two golfers are going to be paired together and crush the competition, you can use both golfers in your lineup. A good example of this is with Patrick Cantlay and Xander Schauffele. The Americans always pair these two golfers together in the Ryder Cup and President Cup matches because they have a history of destroying their competition. You can rack up a lot of points by stacking Cantlay and Schauffele in your lineup (You can also lose a lot of points if they do not win… But the chances of Cantlay and Schaufflele losing are slim). 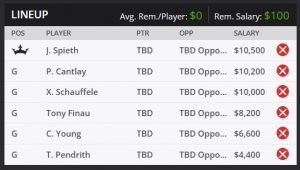 *I am loading my lineup up with the Americans. They are favorites like the Soviet Union was against the Team USA in the 1980 (Miracle on Ice) hockey game. The International Team Captain (Trevor Immelman) is not Herb Brooks. I do not see a miracle happening this weekend.

* There is no difference in lineup construction strategy for Cash and GPPs this week so the lineup should work for both type of contests.