The field for Sentry Tournament of Champions is one of the strongest non-major fields of the season. I mean why not…? Everyone likes a trip to Hawaii in early January. The golfers who won a PGA tournament in the 2020-2021 season were invited to the Setry Tournament of Champions this year. Xander Schauffele did not win last year on the PGA Tour but he won the gold medal at the Olympics, so he is in the field too. That gives us a field of 39 golfers teeing it up in Hawaii. The only golfer who won last year and is not making the trip to Maui is Rory McIlroy. The only golfer in the top-20 of the World Golf Rankings not in the tournament is Dustin Johnson. So we have all of the top golfers in the world teeing it up Thursday.

There is no cut this week, so feel free to take a chance with some of the cheaper golfers in your lineups.

The Sentry Tournament of Champions is played at the Plantation Course at Kapalua. The course is a par-73 course which plays insanely easy. We will likely see some of the lowest scores of the season this week. The fairways are the widest on tour and the elevation changes make 350-yard drives common off the tee (Do not be surprised to see golfers’ driver it well over 400-yards on the par-4 17th hole). You must find golfers who can go low in DraftKings and FanDuel this week. Birdie or Better % has always been a key stat for this tournament.

Click here to see the course: Plantation Course at Kapalua.

Key Stats for the Sentry Tournament of Champions

The Sentry Tournament of Champions Strategy

If you are looking for a winner this week, look for an American. The Sentry Tournament of Champions has had an American holding the trophy in 11 consecutive tournaments in Maui. The Americans with the most success at Kapalua has been Dustin Johnson (not in the field this week), Justin Thomas and Jordan Spieth. Before the Americans dominated this tournament, it was the Australians who won the most. Cameron Smith, Marc Leishman, Cameron Davis, Lucas Herbert and Matt Jones are some of the Aussies in the field this week.

Tournament history means more this week than any other tournament on the schedule. For some reason, the same golfers dominate the top-15 each year. I will try to fit some of these golfers into my lineups but they will be popular (Justin Thomas, Xander Schuaffele, Jordan Spieth, Patrick Reed and Hideki Matsuyama have the best Course History). 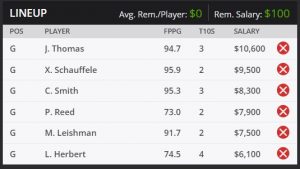 Justin Thomas $10,600 will be the highest owned golfer in the field so I will only play him in Cash and Head-to-Head Contests this week. How can you go wrong with JT? He finished 3rd, 1st, 3rd, 22nd and 1st in his last five Sentry Tournament of Champions.

Xander Schuaffele $9,500 is going to be highly owned too, so I like him more for Cash and Head-to-Head Contests. Schauffele has been almost as good as JT at Kapalua. He finished 5th, 2nd and 1st in his last three trips to Hawaii. I will take my chances with the only golfer in the field who did not win last year.

Cameron Smith $8,300 could get the trophy back for the Ausies this week. He was red hot in the fall. Smith finished 4th, 15th and 9th in the Fall Swing and his games sets up perfectly for Kapalua. He is long off the tee but usually inaccurate. That will not hurt him this week since the fairways are a mile wide. He is also one of the best players in the world in windy conditions. He will be highly owned, so I like Smith more for Cash Contests this week.

Patrick Reed $7,900 has a bit of good recent form and good course history this week. Reed finished 3rd at the Hero World Challenge last month. He has also finished four of his last six trips to Kapalua in the top-six. He should be a safe pick for your Cash Contest lineups.

Lucas Herbert $7,100 will be my “punt play” for the Cash Contest lineup. Why not just play all of the Australians?.. LOL. Herbert won in October at the Bermuda Championship. That is an easy course that requires a lot of birdies in windy conditions. He also ranks No. 4 in the field in Par 5 Scoring. He should be a great “punt play” if he can just birdie all of the Par 5s. 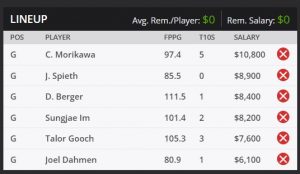 Collin Morikawa $10,800 will be my top golfer in my Tournament Contest lineup. I doubt many people will pay up for Morikawa when they can save some salary and take Justin Thomas, Bryson DeChambeua or Xander Schauffele. I will take Morikawa. He should be entering this tournament after back-to-back wins, but he blew a five-shot lead at the Hero World Challenge. Morikawa finished 7th in his last two trips to Kapalua and he finished 5th, 1st, 7th ad 2nd in the Fall Swing. He is my pick to win this week.

Jordan Spieth $8,900 has not been playing very well in the Fall Swing but I am not worried about it. The problem with Spieth is accuracy off the tee. That will not be a problem this week. The fairways are the widest on tour. Spieth finished 9th, 3rd, 1st and 2nd in his last four trips to Kapalua because this course fits his game perfectly. I will take a chance with Spieth in Hawaii.

Daniel Berger $8,400 is a golfer I always like when he qualifies for the Sentry Tournament of Champions. Berger has played this tournament three times and he finished 10th, 11th and 14th. Each year he gets better. He had a top-10 finish last year. I am hoping for a top-five finish this week.

Sungjae Im $8,200 always gets overlooked in DFS and that could be a mistake this week. Im has good form and good course history at Kapalua. Im finished 1st, 9th and 19th in the Fall Swing. He also finished 5th last year in the Sentry Tournament of Champions. Im is one of the best putters on Bermuda greens so he should have a good chance to finish in the top-five again Sunday.

Talor Gooch $7,600 has been playing well so I will take a chance with him in my Tournament Contest this week. Gooch won his last tournament (The RSM Classic) in November. He also finished 11th in the WGC Mayakoba Championship, 5th in the CJ Cup, 11th in the Shriners Open and 4th in the Fortinet Championship. That is some solid play on the Fall Swing. I will take a chance with Gooch and hope his hot fall turns into success at the Sentry Tournament of Champions.

Joel Dahmen $6,100 will be my “punt play” in my Tournament Contest. What I like about Dahmen this week is that he ranks 8th in the field in Birdie or Better % and 11th in Bogie Avoidance. That means he either makes a birdie or a par on every hole. That should work for $6,100. 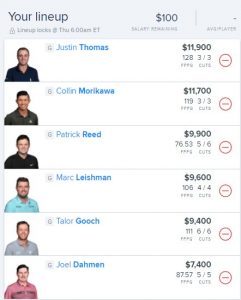 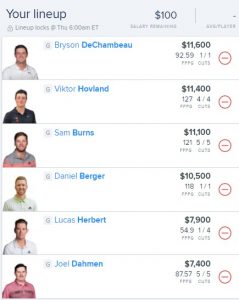 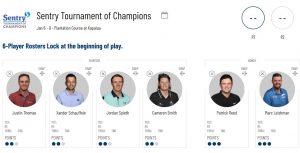 * This is the 1st tournament of Segment 2. There are 10 tournaments in this segment so use your allocations wisely. Justin Thomas, Xander Schauffele and Jordan Spieth have the best course history at Kapalua, so I will burn an allocation with these three golfers.

My One & Done Pick is: Marc Leishman (Sentry Tournament of Champions)

* Since most One & Done Contests start this week or next week, I will start my One & Done picks this week and keep updating it for each tournament. If you already used my pick, please feel free to ask me for another selection in the member’s forum.

* Check out Fantasy Golf Championship if you are interested in joining a One & Done League this year. This is where I usually play and my picks have performed well on the site. Leagues start next week.

Best Bets for the Sentry Tournament of Champions