The best golfers in the world will travel to the birthplace of golf this week for the 150th Open Championship. This will be the final major for the 2022 season and it is a special one. The Open Championship will be played at the Old Course at St. Andrews. This course has hosted the Open Championship 29 times, dating back to 1873. Jack Nicklaus said, “You cannot be considered the best golfer in the world until you won at the Old Course at St. Andrews.” Tigers Woods agreed with that statement. Now we get to see which golfer will add his name to the Claret Jug this week.

The Old Course at St. Andrews is considered the oldest golf course in the world. It plays as a par-72 and is 7,300 yards in length. St. Andrews is a wide open golf course, only protected by some ridiculously deep bunkers and streams that cut through the fairways. The fairways are often called runways because they are so large you could land an airplane on them. The greens are slow with a lot of angulations. It takes a lot of creativity to score well at St. Andrews.

Tiger Woods said after his win at St. Andrews in 2005, “You have to play the weather as much as the course at St. Andrews. As soon as you think you have this course figured out, the winds change and you have to change your strategy.” It is early in the week, but right now the weather does not look too bad for Thursday and Friday. The scores could go really low if the winds and rains do not protect the course.

Click here to see the course: The Old Course at St. Andrews 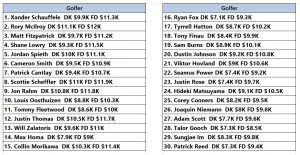 There are 156 golfers in the field this week and the top-70 and ties will make the cut.

I am confident that I can build a strong pole of 20-25 golfers this week. I used 1. Shots Gained Approach, 2. Scrambling, 3. History in Open Championships and 4. Three-Putt Avoidance to choose my golfers this week. The golfers who checked all for boxes made it into my core (some of the golfers checked three boxes but were very close in the other). 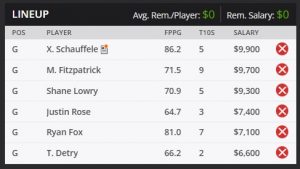 XANDER SCHAUFFLE ($9,900): What would Schauffele’s price be if DK waited until after the Scottish Open to release the prices? He would probably be at least $10.5K. I will take the discount with the best player in golf right now. Schauffle has been a beast in the majors. Schauffele has never missed a cut in the Open Championship and he finished second in 2018. He is my pick to win, so I will have Schauffele at the top of my Cash Contest lineup this week.

MATTHEW FITZPATRICK ($9,700): Fitzpatrick’s stats in the Open Championship are nothing to brag about, but he has made his last two cuts. Fitzpatrick has never entered this tournament playing as well as he is now. He won the U.S. Open, finished fifth in the PGA Championship and 14th in the Masters. He should easily make the cut and have top-10 upside this week.

THOMAS DETRY ($6,600): Would you play Thomas Pieters at $6.6K? If so, why not play Detry. They are almost the same type of golfers. Both are Belgium bombers who play well on links style courses. I used Detry last week in the Scottish Open and he rewarded me with a top-10 finish. He should be able to make the cut and have top-25 upside this week. 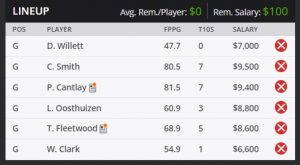 * My goal with this tournament contest lineup is to avoid the chalk and find some lower-owned golfers who could go off this week. Rory McIlroy, Jordan Spieth, Xander Schauffele, Matthew Fitzpatrick and Shane Lowery will be the popular plays. I will use golfers priced near them but with less ownership.

CAMERON SMITH ($9,500): I listened to the Links & Locks podcast and Ben Everill (the host of the podcast) is good friends with Smith. Everill said he talked to Smith after the Scottish Open and Smith said he was just using that tournament as practice. Smith is very confident about his chances at St. Andrews. I expect a bounce-back from Smith this week and be closer to where he was at The Masters when Smith finished third.

PATRICK CANTLAY ($9,400): Cantlay is not the first golfer that comes to mind when people think of links style golf, so his ownership should be lower this week. Cantlay enters the Open Championship is great form. He finished fourth last week at the Scottish Open and has four straight finishes in the top-14. Cantlay finished 12th in the Open Championship in 2018. He has the game to finish in the top-five Sunday.

LOUIS OOSTHUIZEN ($8,800): There are a few question marks about Oosthuizen this week. How much will playing on the LIV Tour reduce his ownership this week and will he actually show up to play? I have heard some people in the fantasy industry say they are fading the LIV Tour players. That is just stupid. Also, Ooosthuizen has a history of WD after the tournament begins. I doubt he will WD this week. Oosthuizen won the Open Championship at St. Andrews in 2010. He also finished second at St. Andrews in 2015. No golfer in the field knows this course of has had as much success at the Old Course as Oosthuizen (not even Tiger Woods). I will take a chance with Louey this week.

TOMMY FLEETWOOD ($8,600): I usually do not play Fleetwood in majors but he seems to be getting closer to winning a big tournament. Fleetwood has made the cut in four consecutive Open Championships. That includes a second-place finish in 2019. Fleetwood finished fourth last week in the Scottish Open, fifth in the PGA Championship and 14th in the Masters. He is too cheap to pass up at $8.6K this week.

DANNY WILLETT ($7,000): I like Louie Oosthuizen’s success at St. Andrews so of course I am going to like Willett’s too. Willet finished sixth in the Open Championship at St. Andrews in 2015. He has made the cut six straight Open Championships, so he is good at this style of golf. His form is not good, but I think he will show up this week and play well.

WYNDHAM CLARK ($6,600): Clark is my sleeper pick this week. His named popped off the page when I ran the key stats for this tournament. Most golfers and fantasy experts think the key to winning the Open Championship is to have a good short game. Clark ranks No.1 in Scrambling and No. 1 in Shots Gained Approach from 30 yards and closer. He also ranks No. 5 in Three-Putt Avoidance (so he is a good lag putter). He ranked 32nd overall in my key stats so his $6.6K price tag should be a bargain this week. I will trust the numbers and take a chance with Clark this week. 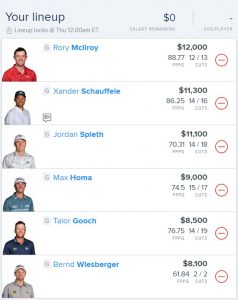 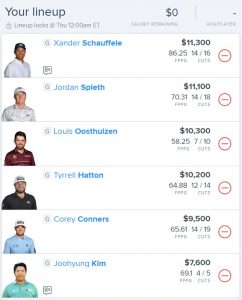 * This is the sixth tournament of segment four. This is also the toughest segment to navigate. We have the Open Championship and the four playoff tournaments left in this segment. It is going to be tough getting to the end with the top golfers. This is not the week to save your top golfers. Use the best golfers you can at the Open Championship. We can save allocations at 3M Open and the Rocket Mortgage Classic in the next few weeks.

* I know betting the chalk is not fun, but I do not think we will see a gofer come out of nowhere to win this week. Rory McIlroy, Xander Schauffele and Jordan Spieth are playing too well right now and have great history in majors. I will bet these three golfers and leave the field to everyone else.