The PGA Tour travels Atlanta, Georgia this week for the Tour Championship. This will be the final tournament for the FedEx Cup Playoffs. The top 30 golfers in the FedEX Cup standings will tee it up for a chance to take home the richest prize in sports, $15 Million!!!

The 2022 – 2023 PGA Tour Schedule starts September 15th with the Fortinet Championship. That tournament will have one of the worst fields of the year. The next tournament I will write a DFS Golf article for will be the Schriners Children’s Open on October 6th. I will post lineups and One & Done picks for the other tournaments in the DFS Golf Forum.

I will also be hosting my Fantasy Golf League on pgatour.com. I will post a link to the league in the DFS Golf Forum and I will send a Tweet to join the league once the new season begins.

Thank you for following my picks this year and I cannot wait for the new season to begin, but we still have one more tournament left so let’s get to the Tour Championship…

East Lake Golf Club plays as 7,350-yard par 70. The course plays long. Seven of the par 4s play 450 or more, so length off the tee is going to be important. The fairways are narrow. Last year on 50% of the golfers put their tee shots in the shot grass. If any of the golfers can find a way to be long and accurate off the tee, they will have a huge advantage.

The greens are average size and have Bermuda grass. Over the last two seasons the greens have been pretty easy for the golfers to read. These greens ranked 3rd easiest on tour over the last two seasons and allowed few 3-puts. So if golfers can hit Greens in Regulation, they should make a lot of birdies. If golfers miss the greens, the rough is so heavy; it will cause a lot of golfers to have a lot of bogies. I still expect a lot of low scores like last week at the BMW Championship. 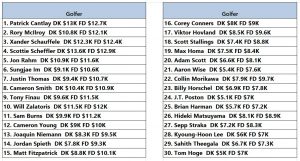 * The rankings this week do not incorporate the strokes the golfers will start the tournament with. They are simply the golfers I project will score the best this week.

DraftKings has a unique scoring system this week (FanDuel has the same scoring system) to match up with the FedEX Cup scoring system for PGA Tour Championship playoffs. Golfers are ranked by the place in the FedEX Cup standings and are award shots based on their ranking. This is huge this week and we must take it into consideration. Here are the rankings and the points each golfer will start the tournament with this week….

Fading some of the golfers high on the leaderboard could prove prudent when filling out rosters. The golfers will be starting with their “finishing” position points on DraftKings, but as we’ve seen in the previous two years, those points can go away fast if or when the leaders are no longer where they started. The top of the leaderboard golfers only come in with their starting points, not the birdies or better points they usually get on the path to their victory.

DraftKings has had this format for three seasons now and every year the same strategy wins. You must select three golfers who are high-priced (and have the winner in your lineup) and pair them with three of the cheap golfers. The winner scores 30 DK Points and second-place scores 20 DK Points. The points after second-place are only separated by a few points. You are going to need those extra 10 points for winning the tournament and a few golfers priced below $6K who can score well this week.

* I really like Scottie Scheffler, Patrick Cantlay and Xander Schauffele this week but they are going to be the three highest owned golfers so I will only have them in 5% of my Tournament Contests (underweight vs. the field) and use these golfers in my Cash Contest lineups. 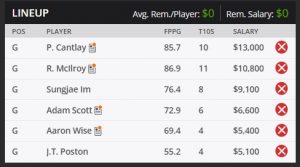 PATRICK CANTLAY ($10,300): Can Cantlay win the Tour Championship again? He is my pick to win. He won last week at the BMW Championship and he is the defending champion at East Lake. He knows what it takes to win and he starts the tournament at eight-under-par and 20 DK Points. I will roll the dice with Cantlay in my Cash Contests.

RORY MCILROY ($10,800): I really like McIlroy to win Sunday. He has been on a mission all season to prove to the LIV Tour that you can make money on the PGA Tour. He would love to be holding up the $15M check Sunday. His game is in terrific form but he has been putting like a clown. He has a history of putting well at East Lake so this is the tournament where his game could all come together.

SUNGJAE IM ($9,100): Im has been in my lineup in the first two playoff tournaments and he has not let me down. I will roll with the South Korean at the Tour Championship too. The two courses that compare well to East Lake at Bay Hill and PGA National. Im ranks No. 1 in the field when you group the stats together using these three courses. He ranks No. 1 in the key stats this week so I will give Im a spot in my Cash Contest lineup.

ADAM SCOTT ($6,600): Scott is one of the easiest golfers to predict. His ball-striking is always good. Scott always has a chance to score well if his long putter gets hot. Well, it is on fire right now. Scott finished fifth in the first two rounds of the playoffs. He will have a good chance to shoot up the leaderboard this week.

AARON WISE ($5,400): Wise is my favorite cheap golfer this week, but he is going to be the favorite golfer of many DFS players this week. That is why I like Wise more for Cash Contests. His tee-to-green game has been red hot for the last month. He also ranks No. 7 in the field in Birdie or Better %, so Wise can post a low score this week to climb the leadboard. Wise is almost the “free square” this week at $5,400.

J.T. POSTON ($5,100): It wasn’t long ago when Poston was one of the hottest golfers on the PGA Tour. He won the John Deere Classic and finished second in the Travelers Championship this summer. Can he find that form this week? I doubt he will contend for the win, but Poston should move into the top-20 and that should be enough if the rest of the lineup performs the way I think it will. 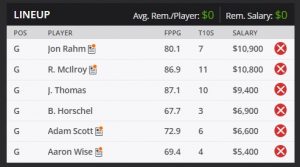 JON RAHM ($10,900): Rahm began the season as the No. 1 golfer in the world. It has not been the best year for him, but he could make it an incredibly successful season with a win Sunday. Rahm has ranked No. 1 in the field in Shots Gained Tee-to-Green in the first two playoff tournaments. He just needs his putted to be good this week in order to win. Rahm putts better on Bermuda greens so I think this could be the week the 2021 Rambo shows up.

RORY MCILROY ($10,800): I will have McIlroy in the Cash and Tournament Contest lineups this week. The golfers will need to be good from Tee-to-Green and Jon Rahm and Rory McIlroy rank No. 1 and No. 2 in that category. Both have struggled with their putters, but that can be fixed. McIlroy is no stranger to shooting up the leaderboards once he is in a hole (just look what he did in The Masters on Sunday this year). McIlroy was never motivated by the $15M purse because he has more money than he ever needs, but sticking it to the LIV Tour could be the motivation McIlroy needs to win the tournament Sunday.

JUSTIN THOMAS ($9,400): Most of the golfers are going to need to post a low round on Thursday or Friday if they want to be on contention on the weekend. Very few golfers are as good as JT at making up ground on the field. How many times have we seen him way down the leaderboard and then he shoots a 62 on Saturday to get right back into the tournament. His stats at this course are great. I will trust that Thomas will join his fellow PGA Tour Ambassador at the top of the leaderboard Sunday.

BILLY HORSCHEL ($6,900): Horschel has won the Tour Championship before. The hole he will start out in is too great for Horschel to win this week, but he could finish in the top-10. Horschel is a horse for the course. He has finished 9th, 30th, 2nd, 1st and 7th in his last five trips to the Tour Championship. Billy-Ho should be a good play for $6,900.

ADAM SCOTT ($6,600): I have Scott in both the Cash and Tournament Contest lineups this week. I just think it is almost cheating when he is allowed to use his long putter when it is on fire like it is now. Scott has been one of the best players in the playoffs this year so I will have a lot of shares of the Australian.

AARON WISE ($5,400): I made a mistake last week by fading Trey Mullinax in my Tournament Contest because of his high ownership and pivoting to Lucas Glover. Mullinax played well and Glover played like crap. I would have won more money than I did if I would have just eaten the chalk. I know Wise will be highly owned this week but I will eat the chalk. 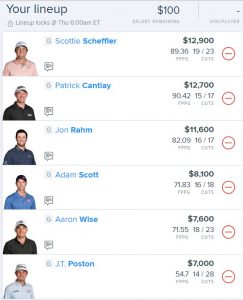 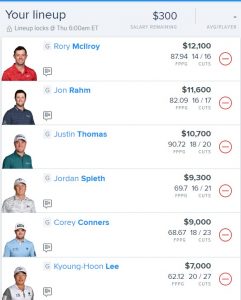 * This is the last tournament in segment four. There is no reason to save your golfers this week. Simply use the best golfers in your lineup for the Tour Championship.