Three of the four majors are complete and now there are only 10 tournaments left in the 2022 season. There are only six tournaments left until the FEDEX Playoffs begin. That includes a trip across the pound for the Open Championship. The DFS golf season is heating up and it is going to be fun creating lineups in these final events.

The fields following a major are typically weaker than most fields but there are a lot of big-name golfers in the field this week. Some of the golfers who will be teeing it up include: Scottie Scheffler, Rory McIlroy, Justin Thomas, Xander Shcauffele, Patrick Cantlay, Jordan Spieth, Brooks Koepka, Sam Burns, Tony Finau, Joaquin Niemann, Webb Simpson and Will Zalatoris. There are a lot of good players to choose from this week for our lineups.

The host course this week will be TPC River Highlands. It is a par 70 which plays 6,840 yards in length. Accuracy off the tee will be important, just like the other Pete Dye designed courses last week. The course is short so Greens in Regulation will be the most important stat. The PGA Tour often tries to hide the pins at the TPC River Highlands so the golfers who are accurate off the tee, hit the greens in the proper tear and can scramble around the greens will be the golfers you will want in your lineups. 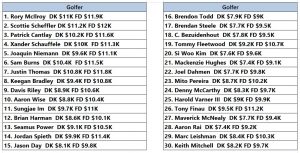 The Travelers Championship has a strong field this week. When I saw the names of the golfers who are teeing it up this week I immediately thought that building a “stars and scrubs” lineup would be the way to go. Then I looked at the course history for the “studs”. Scottie Scheffler never finished in the top-40 here. Rory McIlroy, Justin Thomas, Sam Burns, Xander Schauffele, Sungjae Im and Toney Finau have not finished in the top-10 at TPC River Highlands for a long time. These golfers will all be popular so I plan to use more balanced lineups this week. The most consistent golfer in the high price range has been Patrick Cantlay, but I have heard a lot of people talking about Cantlay this week. I cannot completely fade the high priced golfers, but I will not have as many shares as others in their lineups. Scottie Scheffler and Rory McIlroy seem to be on a mission this year so they will be my highest owned golfers from the $9K+ price range. 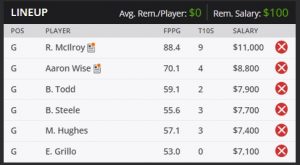 RORY MCILROY ($11,000): My Cash Contest lineup last week proved that you can win a 50/50 or Double-Up by simply having the winning golfer in your lineup. I only had three golfers make the cut last week but Matthew Fitzpatrick pushed the lineup across the pay-line. I am not worried about McIlroy taking a week off. He seems motivated to stick it to the LIV Tour and dominate the PGA Tour. I expect McIlroy to win Sunday and push the lineup across the pay-line like Fitzpatrick did last week.

AARON WISE ($8,800): Wise is the best value pick in DraftKings this week. His iron game is off the charts right now and that should play well on a Pete Dye course. He was in contention last week in the U.S. Open and Wise finished second in his previous tournament at the Memorial. He is a great play for both Cash and Tournament Contests this week.

BRENDON TODD ($7,900): Do I trust Todd? No. Do I like the stats? Yes. Todd looks like he found some form. He finished third at the Charles Schwab and 13th at the RBC Canadian Open. He has also made his last two cuts at the Travelers. That includes an 11th-place finish in 2020. Todd likes this course and his form is good right now. He should be able to make the cut and finish in the top-25.

BRENDAN STEELE ($7,700): Steele is going to be popular this week. That is why I like him for Cash Contests. If he blows up and misses the cut, it shouldn’t hurt us too bad because 40% of the field will have him. Steele should play well though. He enters the tournament coming off back-to-back top-10 finishes and he has made six cuts in a row. Steele has also finished in the top-25 in seven of his last nine trips to TPC River Highlands. Steele is a good value pick for your Cash Contests this week.

MACKENZIE HUGHES ($7,400): Hughes seems to be a bit underpriced this week. He has made his last three cuts on tour and that includes a top-25 finish last week in the U.S. Open. Hughes has never missed a cut in the Travelers Championship (5 for 5) and that includes a third-place finish in this tournament in 2020. His form is good and so is his course history. I will take a chance with Hughes at the bottom of my Cash Contest lineup this week.

EMILIANO GRILLO ($7,100): I used to play Grillo a lot in DFS but it has been a long time since he has been in one of my articles. His name popped when I did my research this week so I will go back to him in my Cash Contest lineup. Grillo has now made five cuts in a row (He hasn’t missed a cut since early April). He has also made four of his five cuts at the Travelers Championship. I needed a cheap golfer so I could fit Rory McIlroy into the lineup. Grillo is the best option available. 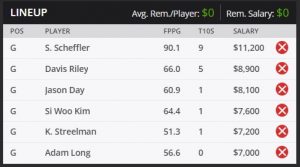 SCOTTIE SCHEFFLER ($11,200): I will do something that I do not expect many people to do this week… I will pay up for Scheffler. I am sure some people will look at his course history and pivot to Rory McIlory or Justin Thomas. Scheffler is a better golfer than he was in the past. He is the No. 1 golfer in the world and he ranks No.1 in my key stats. I just need Scheffler to play like he has all year and this pick should work out fine.

DAVIS RILEY ($8,900): The key to winning on Pete Dye style courses is to hit greens in regulation and place the ball in the right tier of the green. Riley ranks No. 1 in the field in Shots Gained Approach and proximity to the pin. Riley has made six cuts in a row with five finishes in the top-13. He is a great golfer to pair with Scottie Scheffler this week.

JASON DAY ($8,100): Day used to be my favorite golfer and then his back problems ruined his game. He seems to be getting over his injuries and playing good golf again. Day has made four cuts in a row and now he gets to tee it up at his best course. Day finished 10th, 46th, 8th and 12th in his last four trips to TPC River Highlands. I will play Day this week and hope he can continue to play well at this course.

SI WOO KIM ($7,600): I have a rule in Fantasy Golf… Use Si Woo Kim in my core whenever the PGA Tour plays on a Pete Dye course. He is one of the best in the field at positioning his ball in the correct part of the fairway and hitting the small greens. Kim finished 11th in this tournament in 2020. He should be low owned, so I will take a chance with Kim and hope he can get me another top-15 Sunday.

ADAM LONG ($7,000):  I need a cheap golfer to make this lineup work. I will take a chance with Long. He is coming off a 21st-place finish at the Canadian Open and he finished in the top-25 in two of his last three trips to TPC River Highlands. Long also popped when I ran the key stats. He ranks 24th in Shots Gained Approach, 22nd in Ball-Striking and 30th overall in the key stats. Not bad for $7K. I just need Long to make the cut Friday for this to work out. 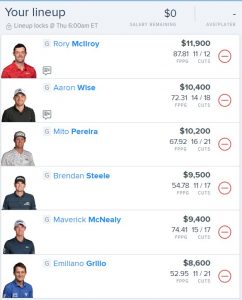 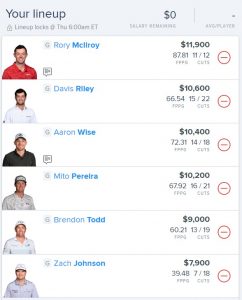 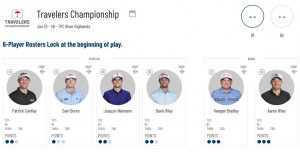 * This is the third tournament of segment four. This is also the toughest segment to navigate. We have the U.S. Open; Open Championship and the four playoff tournaments in this segment. It is going to be tough getting to the end with the top golfers. The field was stacked at the Canadian Open two weeks ago and I was able to score well without playing the top golfers. I plan to save the top golfers for the Open Championship and the FEDEX Playoffs, so I will use some of the mid-tier golfers this week.

* I am quickly running out of the top golfers to use for the One & Done Contests. The best golfers I have left include. I will use Davis Riley based on his recent form, but my top plays would be Rory McIlroy, Patrick Cantlay and Scottie Scheffler (In that order).