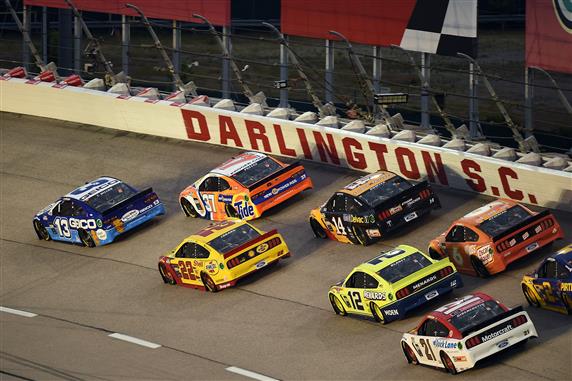 The NASCAR Cup Series will compete this week at Darlington Raceway. The race last week at Dover should give us an idea of what to expect Sunday, but there are still some questions that need to be answered. How will the Gen-7 car and the composite body hold up against the “Darlington Stripe?” Will the driver be able to be more aggressive this week because of the tough chassis? How will the wider tire wear out through the race? The teams who are able to answer these questions will be up front Sunday.

NASCAR gave the Cup Series teams 20 minutes to shake down their cars in practice. I really wish the teams had more time to figure out the Gen-7 car. Last week the Cup Series had major tires problems because the teams were not able to make a long run in practice to properly gauge how the tires would wear in the race. I sure hope that is not the case again Sunday. There are few tracks on the circuit that wear tires out as quickly as “The Lady in Black.” We want the drivers who are fast on the 10-lap speed chart in our lineup at Darlington.

Here are the speeds from Saturday’s practice session… 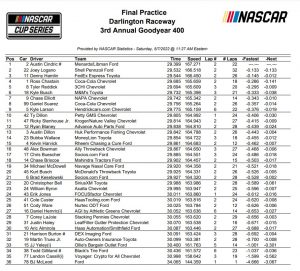 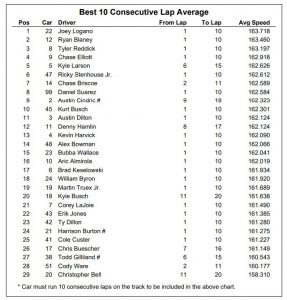 Darlington is an egg-shaped, high-banked 1.36-mile track. It takes a driver a while to figure out how to navigate this odd-shaped track. Once a driver figures it out, they usually have consistent success at Darlington. 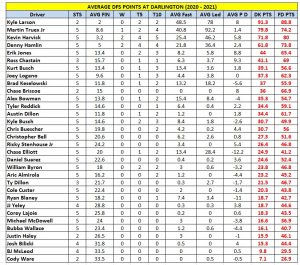 Here are the drivers I expect will have the best chance to dominate the race Sunday: Kyle Larson, Martin Truex Jr., Joey Logano, Kyle Busch and Ross Chastain 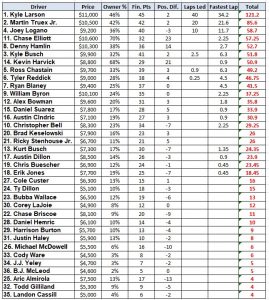 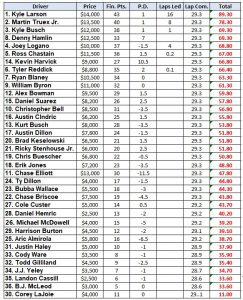 KYLE LARSON (DK $11K FD $14K): Larson has been one of the most consistent drivers at Darlington. No driver can run the wall the way he does. Sometimes he gets a “Darlington Stripe” but the Gen-7 car is tough and it should be able to take the beating Larson will put it through Sunday. Larson finished 2nd, 2nd, 2nd and 3rd in his last 4 races at Darlington. He also averaged 121 laps led in those races. Larson starts on the front row and he should be one of the top dominators Sunday.

MARTIN TRUEX JR. (DK $10.5K FD $13.5K): Truex completed dominated this race last year. He led 248 of the 293 laps, won both Stages and went to Victory Lane. The No. 19 team has not hit of the perfect setup in the Gen-7 car yet this year, but they are getting closer. Truex will be the best pick in the field if he run as well as he did in this race last year.

CHASE ELLIOTT (DK $10.6K FD $13K): Darlington has not been the best track for Elliott. He only has three top-five finishes at the track since 2016 (8 races). Elliott had a right rear tire go down in practice and he destroyed his car. Elliott will start in the back in a backup car. He is a lock for all Cash Contests and it will be risky to fade Elliott in Tournament Contests because he will likely score 20+ place differential points.

DENNY HAMLIN (DK $10.3K FD $12.5K): I know this is not going to be a popular pick. It is tough to trust Hamlin right now, but the car does have speed. He led 67 laps last week at Dover and it would have been a lot more if they would have put the tire on the car. Hamlin won the last race at Darlington and he won in 2020 too. He is the best driver in the field at Darlington according to the stats. Hamlin starts 22nd and he should be one of the best place differential drivers even if he has to go to the back for unapproved adjustments.

WILLIAM BYRON (DK $10.1K FD $11K): Byron’s stats at Darlington are misleading. His average finishing position at “The Track Too Tough to Tame” is 20.8, but he did figure this egg-shaped track out in 2020. Byron finished 5th in 2020 and 4th in this race last year. He came back in the playoffs and was caught up in a wreck. Byron said he liked the way his car ran on the long run in practice. He starts 9th and should finish in the top-10 Sunday.

KYLE BUSCH (DK $9.9K FD $12K): Busch is quietly putting together a good season in 2022. He has finished the last five races in the top-10 with a 5th-place average running position since March. Rowdy has not won at Darlington since 2008, but he has finished 3 of his last 4 races in the top-10. Busch had one of the fastest cars in practice and he qualified 5th. Busch will be a good choice to be one of the top dominators “IF” he races. He is on baby watch and Trevor Bayne is on standby to drive the car. Keep an eye on that before the race.

ROSS CHASTAIN (DK $9.7K FD $11.5K): We need to believe what we see and not what we remember. Each week we see Chastain up front dominating races. We remember that his average finishing position at Darlington is 20.6. Chastain finished 3rd in his last race at Darlington. His No. 1 Chevy for Trackhouse Racing is a lot faster than what he had at Chip Ganassi Racing last year. Chastain is a good pick to be a dominator Sunday.

ALEX BOWMAN (DK $9.6K FD $9.5K): Most of Bowman’s wins have been at tracks where the tires wear out quickly (Auto Club, Chicagoland….). It is surprising that he has not had more success at Darlington because he is the master at saving his tires over a long run. Maybe this is the year he figures out “The Track Too Tough to Tame.” I like what Hendrick Motorsports has going right now so I will use two of their drivers in my lineup this week.

RYAN BLANEY (DK $9.4K FD $10.5K): Darlington is one of the worst tracks for Blaney, so why is he listed in the core? Blaney has had speed in every race this year (Even the tracks where he had little success at in the past). I am sure people will look at his 19.3 average finishing position at Darlington and fade him. I like playing a low owned Blaney, but only in large Tournament Contests. He should be a decent contrarian play this week.

JOEY LOGANO (DK $9.2K FD $10K): I was shocked how bad he sucked last week at Dover. I will give Logano a mulligan for that race. He has had a lot of success at Darlington so it was no surprise to see the No. 22 car show up with some speed this week. Logano posted the fastest speed in practice and won the pole for the race. He had the fastest car in practice, has the No. 1 pit stall and was in the booth for the Xfinity Series race. Logano should be one of the top dominators Sunday.

TYLER REDDICK (DK $9K FD $8.8K): Reddick has not had much success at Darlington and that surprises me because the “Lady in Black” is his type of track. Reddick finished 7th at Darlington in 2020 and he had the 5th best running position in this race last year. The fast way around Darlington is right up against the wall. The two best at it are Kyle Larson and Reddick. The No. 8 car posted the 5th-fastest speed in practice with the 3rd fastest long run speed. Reddick qualified 10th for the race. Reddick is going to either finish in the top-five or knock down the fence trying.

KEVIN HARVICK (DK $8.8K FD $9K): Harvick has been “Mr. Consistent” at Darlington. Here are his finishes in his last 12 races at Darlington: 5th, 6th, 1st, 3rd, 1st, 4th, 4th, 9th, 2nd, 5th, 1st and 5th. That is outstanding. Harvick had a tire go down in practice and it crushed the rear diffuser on the car. He missed qualifying while the team fixed the car. Harvick will start in the back and be a lock for Cash Contest games. He will be a risky driver to fade in Tournament Contests too based on his track history.

CHRISTOPHER BELL (DK $8.3K FD $8.5K): Bell had a lot of speed last week. He was running in the top-10 until he had a penalty on pit road. His stats at Darlington are hit and miss. He is good in DFS when he starts deep in the field. Bell started 21st and finished 13th in this race last year. He starts 3rd Sunday so there is some risk in using him this week. I do like the speed the Joe Gibbs Racing Toyotas have though so Bell is a Tournament Contest play only.

DANIEL SUAREZ (DK $7.8K FD $8.2K): Suarez has been one of the better value picks this year. He started 26th and finished 13th in this race last year. Trackhouse Racing has a lot more speed this year than they had last year. Suarez should have a decent chance to finish in the top-12 Sunday.

ERIK JONES (DK $7.7K FD $7.2K): Darlington is the best track for Jones and it is not even close. Jones won at Darlington in 2019. He finished 4th, 5th, 8th, 1st 8th and 5th in his 6 races at Darlington while driving the No. 20 car for Joe Gibbs Racing. The Gen-7 car has leveled the playing field so Jones should be able to have similar success in his No. 43 car for Richard Petty Racing. I will have plenty of shares of Jones Sunday.

CHRIS BUESCHER (DK $6.9K FD $6.8K): Buescher should be a good value pick this week. He finished both races at Darlington in 9th place last year and he won the pole and finished 8th at Dover last week. His track history and speed last week should translate into success at Darlington.

COLE CUSTER (DK $6.3K FD $5K): Custer has been a decent pick when he starts deep in the field. He started 31st and finished 11th in the last race at Darlington. He was in the winning lineup for that race and he could be a good pick again Sunday. Custer starts 28th and he has a good chance to finish inside the top-20.

JUSTIN HALEY (DK $5.9K FD $5K): Haley has been one of the best “punt plays” in the recent races. Haley started 14th and finished 11th at Dover last week. Now he starts 29th. Haley will score a lot of DFS points if he can repeat the performance he had last week.

COREY LAJOIE (DK $4.9K FD $5K): LaJoie is the best “punt play” in the field. His No. 7 car does not have the fastest speed, but LaJoie is good at making it to the end of the race. That is all he has to do to return value from the No. 30 starting spot. LaJoie posted the 21st fastest long-run speed in practice. He should have a good chance to move up 5-10 spots Sunday. 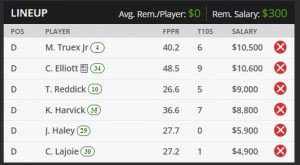 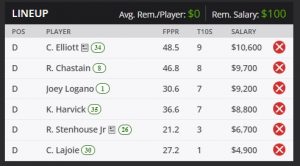 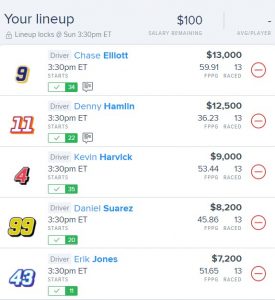 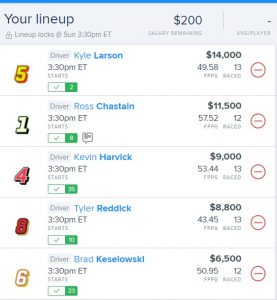