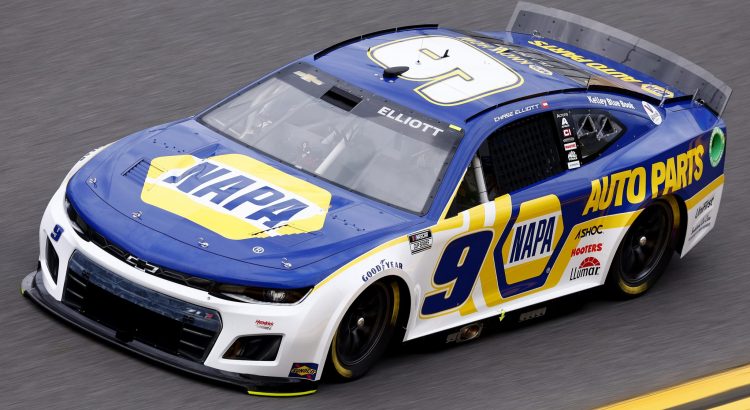 The NASCAR Cup Series will start their run for the 2022 championship with a race at Darlington Raceway. The Southern 500 always produces some of the best racing of the year and there is a great chance that the Gen-7 car is going to make it even better. It should be fun to see the 16 playoffs drivers compete at “The Track Too Tough to Tame” and it should be a good race for DFS contests. The Cook Out Southern 500 can be seen Sunday night at 6 p.m. ET on USA Network.

The Cup Series was back to their regular practice and qualifying schedule after not having any track time last week. The Cup Series had 20 minutes to dial in their cars for the race and then the teams lined up the cars for qualifying. The single-lap times do not matter much at Darlington since the tire wear is so high. We need to focus on the drivers who were fast on the 10-lap average speed charts.

Here are the lap times from the practice Saturday at Darlington… 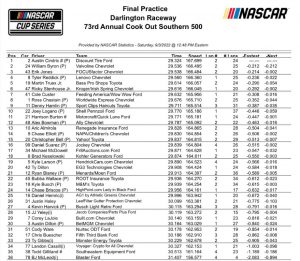 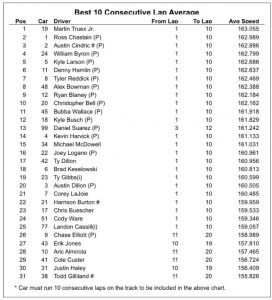 Darlington is a unique track. “The Track Too Tough to Tame” is a 1.366-mile, high-banked, egg-shaped track. Tire wear is huge at this track. The drivers who can search the track for grip typically run up front at Darlington.

We need to look at the other high-banked intermediate tracks in order to handicap the race at Darlington. The Cup Series competed at Darlington in May so that race gets double the weight in the Driver Rankings this week. I will also use the data from the races Las Vegas, Dover and Nashville (That is four races, including the first race at Darlington). 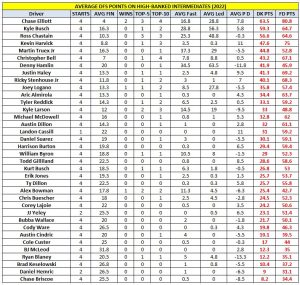 The trend at Darlington is for two main dominators in the race. The two dominators lead roughly 140 laps each and score roughly 70 fastest laps (66.5 DK Points). The Gen-7 car leveled the playing field, but I expect the race Sunday night to have two main dominators again. We are going to have to pay up for the two drivers who lead the most laps. Out lineup should easily reach the pay-line if we are able to score the 66.5 DK Points for dominating the race.

The drivers I expect to lead the most laps and score the most fastest laps include: Joey Logano, Kyle Larson, Tyler Reddick, Denny Hamlin and Christopher Bell

Daniel Suarez had his car fail inspection three times. Suarez was not allowed to qualify so he will start last and be scored from the last position. He will also have to do a pass-through penalty to start the race and will likely go a lap down. I am not worried about it. The race Sunday night is 500 miles long. That is plenty of time for Suarez to get back on the lead lap. He starts last, was 16th fastest in practice and finished 10th at Darlington in May. He should be fine. 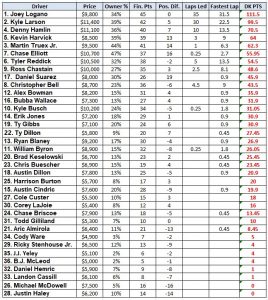 ** The Model is typically not as accurate on the Superspeedways since these races are so unpredictable. 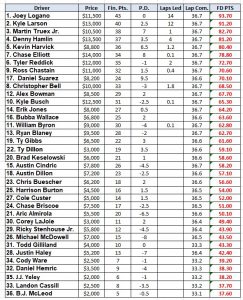 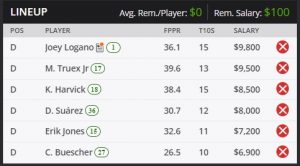 JOEY LOGANO ($9,800): Logano did not look great in practice but his teammate (Austin Cindric) had one of the fastest cars. The No. 2 team met with Logano’s team to share notes after practice. Logano then went out and won the pole. Logano also won the pole in May at Darlington. He led 107 laps, won both Stages and went to Victory Lane. Passing was tough in that race so Logano should dominate the race Sunday night too.

KEVIN HARVICK ($5,500): I like safe picks in my Cash Contest lineup. You will not find a safer pick than Harvick. He has never finished outside the top-10 at Darlington in a Stewart-Haas Racing car. He started 35th and finished fourth at Darlington in May. He could win the race from his 18th starting position Sunday night.

DANIEL SUAREZ ($8,000): The No. 99 team dug Suarez a hole he will spend a lot of time climbing out of. Their car failed inspection three times so Suarez will start in the back and have to serve a pass-through penalty. The race Sunday night is 500 miles in length so there is plenty of time for Suarez to get back to the front. He starts 36th and he had the 16th fastest car in practice. He should quickly go to the front once he is caught up with the field. (He is an even better pick if there is a competition caution early in the race).

ERIK JONES ($7,200): Jones is always my go-to-driver at Darlington. I really do not care where he qualifies because he always has a good chance to finish in the top 10. Jones starts 15th and he posted the third-fastest speed in practice. Jones knows his way around “The Lady in Black”, so I will take a chance with the No. 43 car Sunday night.

CHRIS BUESCHER ($6,900): The Cash Contest lineup should be pretty safe when Buescher is the cheapest driver. Buescher starts 27th and his average finishing position on the high-banked intermediate tracks is 18th. He finished 16th at Darlington in May. Buescher will be a great pick if he can finish inside the top-20 Sunday night. 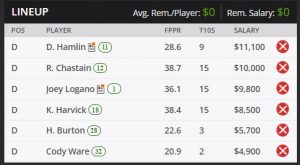 DENNYHAMLIN ($11,100): has had a lot of speed this year on the intermediate tracks. This race comes down to weather of not Hamlin can avoid mistakes on pit road. He won this race last year and he leads the Cup Series with four wins at Darlington. Hamlin knows how to save his tires to get to the front. I expect the No. 11 car to lead a portion of the race Sunday night.

ROSS CHASTAIN ($10,000) has a series-best 115.4 Driver Rating on the intermediate tracks this year. He has also led the most laps and scored the second-most Stage Points. Most of that production came earlier in the season, but was the team testing for the playoffs over the last month? Chastain was second-fastest on the 10-lap average speed chart and third-fastest on the 15-lap average speed chart in practice. I will roll the dice and hope Chastain can play nicely with his friends Sunday night.

JOEY LOGANO ($9,800) I will play Logano in both the Cash and Tournament Contest lineup Sunday night. I usually try to fit more drivers into my lineup but I trust Logano from the pole. He is a smart driver (aggressive and sometimes a dirty driver, but he is a smart driver). His pit crew ranks No. 1 in the Cup Series and that should be huge in a race with at least 13 pit stops and when Logano has the No. 1 pit stall.

KEVIN HARVICK ($8,500) will also be in both lineups Sunday night. He was my pick to win this race before practice and qualifying. I moved him down a few spots in my rankings because he did not post the fastest laps in practice and he did not qualify up front, but he never does at Darlington. What he does do well is finish in the top-five at “The Track Too Tough to Tame.” Harvick is just too good at this track to fade this week.

HARRISON BURTON ($5,700): Burton is my sleeper pick Sunday night. Just like his father, Harrison is very good at managing his tires over a long run. He is a smooth driver that just needs to avoid a wreck to be a great pick. Burton started 25th and finished 14th at Darlington in May. I expect a similar race from Burton Sunday night.

CODY WARE ($4,700): I am not going to try and put a lipstick on a pig here… The only reason Ware is in the lineup is to save money. He starts 32nd and he posted the 31st fastest speed in practice. There is a chance he could finish inside the top-30. I want the top drivers in my Tournament Contest lineup so I will use Ware as a “punt play.” 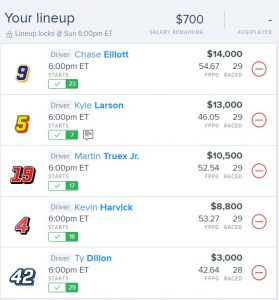 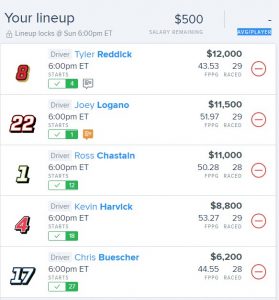