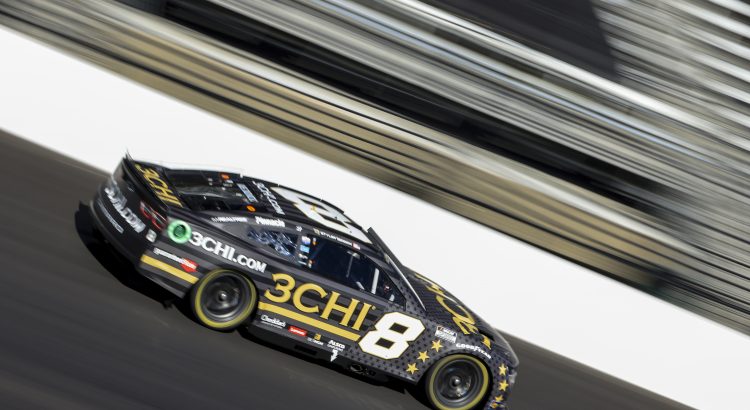 The NASCAR Cup Series will compete on the road course at the Indianapolis Motor Speedway Sunday. This will be the fourth race for the Cup Series on a road course (COTA, Sonoma and Road America were the others). The Gen-7 car has performed well on the road courses this year and I expect the same this week. The Verizon 200 at the Brickyard can be seen Sunday at 2:30 p.m. ET on NBC.

Last week’s DFS contest were a mess. Denny Hamlin and Kyle Busch were DQ’d after the race. DraftKings rules state they go by the results when the checkered-flag is waiver, so no changes in their game. FanDuel decided to take away the points from Hamlin and Busch and it totally screwed us on their site. My picks last week finished second in the $2.22 large tournament contest and won the $25 tournament contest. I had $346 in winnings taken away. I was not too happy to say the least. Well, better luck this week.

The Cup Series had their regular practice schedule this week. The teams were broken down into two groups and they had 20 minutes to dial in their cars for the race. The Brickyard is a 2.5-mile road course. The teams did not have time to make any long runs in practice but that doesn’t mean we did not learn a bit from practice. The cars were impounded after qualifying so the speed the cars had in practice is the speed the teams will start the race with Sunday. 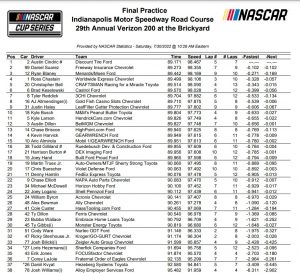 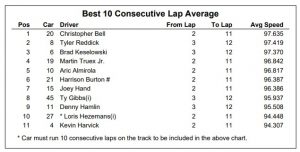 The Gen-7 car races differently from the previous generations of cars on the road courses because of the independent rear suspension and the larger brakes on the car. Some of the data from the previous races at the Indianapolis Road Course can be used to handicap this race, but I will be focusing the picks on practice speeds and performances on the road courses this year. That includes the races at COTA, Sonoma and Road America.

Here are the average DraftKings and FanDuel Points on the road courses in 2022.. 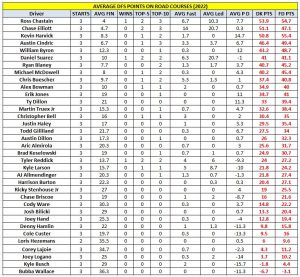 My strategy for the Indianapolis Road Course will be to select drivers who have a good chance to finish in the top-12. Our lineups should score well if we have 6 of the top-12 drivers when the checkered-flag is waived Sunday. 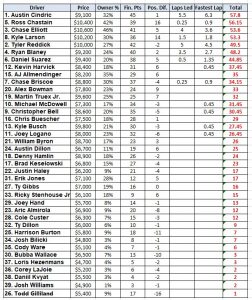 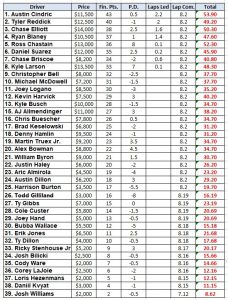 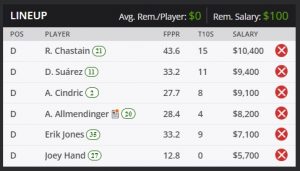 ROSS CHASTAIN ($10,400): Chastain has been the most consistent driver in the Cup Series this year. He has a 12.2 average finishing position in the 21 Cup Series races this year and that includes a fourth-place average finishing position on the road courses this year. Chastain was fourth-fastest in practice, but he got loose in qualifying so he will start 21st Sunday. Chastain should score a lot of place differential points and be a good pick for Cash and Tournament Contest lineups at Indy.

DANIEL SUAREZ ($9,400): Trackhouse Racing has had the fastest cars this year and they have some more speed this week. Suarez posted the second-fastest speed in practice. He should score some place differential points from his 11th starting position. Suarez won at Sonoma and his car is fast enough to win Sunday.

AUSTIN CINDRIC ($9,100):  I expected Cindric to be good this weekend but he was the driver who impressed me the most in practice and qualifying. Cindric posted the fastest speed in practice and qualified second for the race. He has finished all of the road course races in the top-10 this year. Cindric should run up front, have a good chance to score dominator points and be a good pick for your Cash and Tournament Contest lineups Sunday.

AJ ALLMENDINGER ($8,200): There is no way you would play Allmendinger in your lineup if you listened to him on the radio in practice. Allmendinger said his car was aweful and would not do what he needed it to do. I do not care how bad his car is. This pick is all about Allmendinger’s talent on road courses. He qualified 20th and he has the talent to take a shitty car and finish in the top-10.

ERIK JONES ($7,100): Jones is in the same situation at AJ Allemendinger. He cars is evil and he had a hard time keeping it on the track. Jones starts 35th and there is no way he is going to finish that far back. Jones has a 19th-place average finishing position on the road courses this year. He qualified 30th and finished 9th at COTA. He will be one of the best picks in the field if he can have a performance like that Sunday.

JOEY HAND ($5,700): Hand will be my “punt play” for my Cash Contest lineup. I watched Hand in practice and then I prayed he would not qualify up front. He did exactly what I needed him to do. Hand posted the 18th fastest speed in practice and qualified 27th for the race. Hand finished 20th at Sonoma and 21st at Road America. He will score 27 DK Points if he can finish 21st Sunday. That is enough points for your Cash Contest lineups. 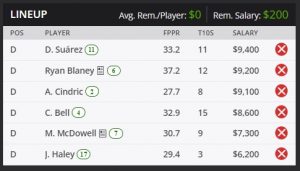 * My goal with the Tournament Contest lineup is to have six drivers who can finish in the top-12. The six drivers listed below have the speed to do it.

DANIEL SUAREZ ($9,400): Suarez will be in my Cash and Tournament Contest lineup this week. I listened to Suarez on the radio during practice and he loved his car. He should though… The car was the second-fastest in practice. Suarez said, “Guys, we nailed the same setup we had a Sonoma.” He won that race so I will pay up for Suarez and hope he can win again.

RYAN BLANEY ($9,200): This race should come down to a battle between Austin Cindric and Ryan Blaney if the stats are correct. Blaney posted the third-fastest speed I practice and qualified sixth for the race. The No. 12 car finished second at the Indianapolis Road Course last year. I will play Blaney and hope he can have a podium finish again this week.

AUSTIN CINDRIC ($9,100): Cindric is another driver I will have in my Cash and Tournament Contest lineup. He has the fastest car in the field and he is only $9.1K. I cannot pass up a deal like that. Cindric should post some dominator points Sunday and finish in the op-five.

CHRISTOPHER BELL ($8,600): My strategy entering this race was to fade the Toyota’s. They have not been very good on the road courses this year. Bell was too good Saturday to ignore. He posted the fifth-fastest speed in practice with the fastest long-run speed. Bell qualified fourth for the race so he is close enough to the front to score some dominator points. Bell won at the Daytona Road Course last year and he finished third at COTA this year. The No. 20 car should easily be the best Toyota in the field Sunday.

MICHAEL MCDOWELL ($7,300): The No. 34 team was penalized after the race at Pocono last week, but they were smart and appealed their penalty. That means crew chief Blake Harris will be able to call the race on top of the pit box. McDowell has been good on the road courses this year. He finished third at Sonoma and eighth at Road America. McDowell should be good enough to finish in the top-10 Sunday.

JUSTIN HALEY ($6,800): The popular play this week will be AJ Allmendinger. I will pivot to his teammate this week and play Haley. He started 29th and finished eighth in this race last year. He also finished 12th at Sonoma and 15th at COTA earlier this season. Haley posted the ninth-fastest speed in practice so his car is fast enough to finish in the top-10 Sunday. 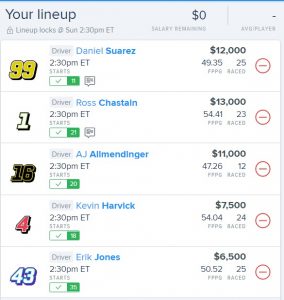 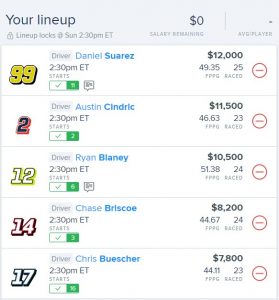