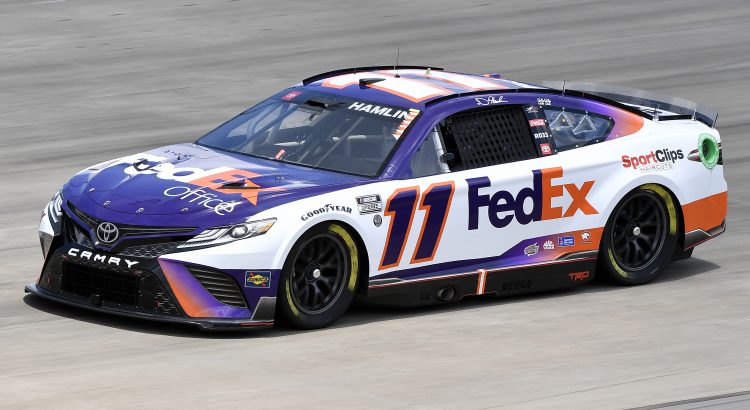 The NASCAR Cup Series is back after their only week off in 2022. The racing has been great at most of the tracks and that should not change in the second half of the season. The year of unpredictability should also continue. The Goodyear tires have exploded at a record pace this year and that has created a lot of cautions and a lot restarts. NASCAR seems to be OK with it, so do not expect any changes. The restarts will cause lead changes and make it tougher to predict drivers for your DFS lineups. I have a strategy though, so we should be in better shape than most of the entries.

The Cup Series had an extended practice session this week. The teams had 50 minutes to dial in their cars Friday and then they set the field through group qualifying Saturday. Most of the teams were able to make some long runs in practice so I would focus on the 10-lap average speeds for your picks this week. The final round of qualifying was rained out, so there are some fast cars starting deeper in the top 10 (Ross Chastain, Martin Truex Jr. and Christopher Bell). 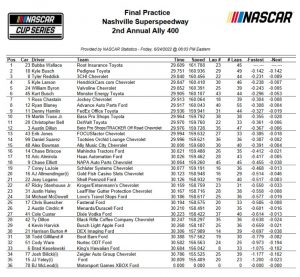 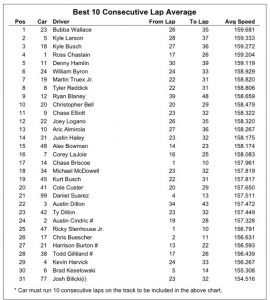 Nashville Superspeedway is a 1.33-mile tri-oval track. The most similar tracks to Nashville are Richmond and WWT Raceway. I will also use some of the data from Phoenix and Dover for the race this week. Here is the drivers average DFS Points at Phoenix, Richmond, WWT Raceway and Dover this year… 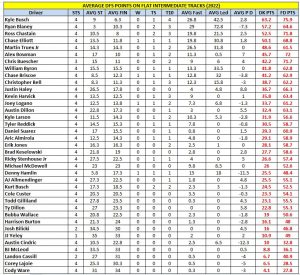 * Kyle Busch crashed in practice so he will start last and be scored from the last position. It is going to be tough to win a contest without Busch in your lineup. I hate weeks like this because we are forced to play one of the highest priced drivers. I plan to use Busch in 80% of my lineups. If he finishes inside the top-20, Busch will score 40+ DK Points. A top-10 finish gets Busch 60+ DK Points. My strategy this week is to pair Rowdy with two lower owned drivers who can score dominator points (Like William Byron, Joey Logano or Christopher Bell). 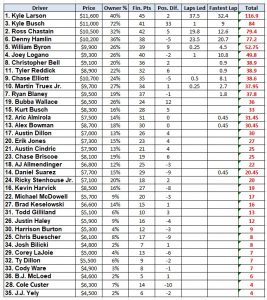 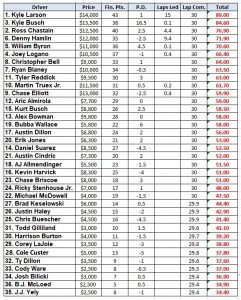 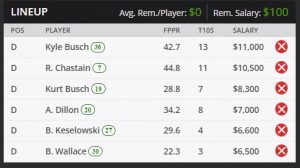 KYLE BUSCH ($11,000): Rowdy will likely be 75% owned in Cash Contests but he should be 100% owned. The No. 18 car starts last and Busch is almost a lock for 50+ DK points. Do not try to be cute and gain an ownership advantage by fading Busch, just select the No. 18 car and move onto the next pick.

ROSS CHASTAIN ($10,500): A popular lineup construction this week will be to pair Kyle Busch with Kyle Larson. I agree that is a good strategy, but it is not necessary. Chastain has been better than Larson this year and his speed in practice was nearly the same as Larson. I will save $1,100 of salary and pivot to Chastain.

KURT BUSCH ($8,300): Busch starts 19th and his speed in qualifying is deceiving. Busch qualified when the sun was out and the track had no grip. His car posted the sixth-fastest speed in practice and Busch just finished third at a similar track (WWT Raceway) three weeks ago. Busch should have a good chance to finish in the top-10 Sunday.

AUSTIN DILLON ($7,000): Dillon has to be better in the race than he is in his reality show. Dillon started 28th and finished 12th at Nashville last year. He was one of the best value picks in the race. He also started 29th and finished 15th at WWT Raceway three weeks ago. Dillon should have a good chance to finish inside the top-15 from the 20th starting position.

BRAD KESELOWSKI ($6,600): It is no secret that Keselowski has not been very good this year, but he should be a lot better than his 27th starting position. Two similar tracks to Nashville are Dover and WWT Raceway. Keselowski finished 20th in those two races. He will score 30 DK Points if he can finish 20th Sunday. That should be enough points to help your Cash Contest reach the pay-line.

BUBBA WALLACE ($6,500): I hate playing Wallace in DFS because I do not trust him. It is a little easier to trust Wallace when he posts the fastest speed in practice, his car is fastest on almost all of the long-run speed charts and he starts 30th. Does Wallace have the talent to take a top-five car and finish in the top-15 from the 30th starting spot? He will score 43 DK Points if he can.

* The lineup I will use in Cash Contests with the two Kyle’s includes: Kyle Busch, Kyle Larson, Christopher Bell, Brad Keselowski, Bubba Wallace and Todd Gilliland 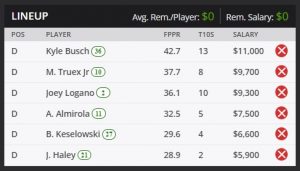 KYLE BUSCH ($11,000):  I know Busch is going to be highly owned and I know the key to winning Tournament Contests is to find drivers who are lower owned and can score well. This is not the race to try and be cute and fade Busch. Even if he has a shitty race and finishes 25th, he will still score 30+ DK Points. The floor for Busch is through the roof and so is the ceiling. I will try to be contrarian with the other drivers in my lineup.

MARTIN TRUEX JR. ($9,700): Truex has not been as dominant in 2022 as he has been in the past, but that could change this week. You could tell Truex was stressed about his decision to retire or return to racing next year. Now that he has answered that question, Truex can focus on racing again. He led 42 laps and finished sixth three weeks ago at WWT Raceway. I expect a similar race from the No. 19 team Sunday.

JOEY LOGANO ($9,300): Logano will be my pivot from a higher owned Denny Hamlin, Kyle Busch and Joey Logano. The No. 22 team looked like crap in practice but they did not look great two races ago at WWT Raceway. Logano led 22 laps and won that race. Kyle Busch, Martin Truex Jr. and Joey Logano combined to lead 54% of the laps in the last flat track race. I am hoping they can do it again.

BRAD KESELOWSKI ($6,600): I try not to use the same drivers in the Cash and Tournament Contest lineups so I can provide more information about other drivers, but I like Keselowski this week. I expect Bubba Wallace will be higher owned based on his practice speed. I will pivot to Keselowski. I trust him a lot more than I trust Wallace. I just need a top-20 from Keselowski Sunday.

JUSTIN HALEY ($5,900): No one is going to play Haley from the 21st starting position but I will. Haley has been pretty good lately. He finished 12th, 17th, 27th and 3rd in his last four races (14th place average finishing position). Haley posted the 14th-fastest long-run speed in practice. He should be able to finish in the top-20. That would be great at low ownership this week. 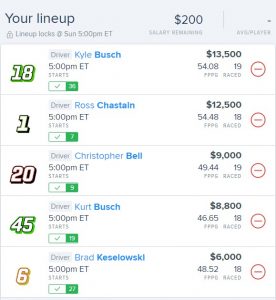 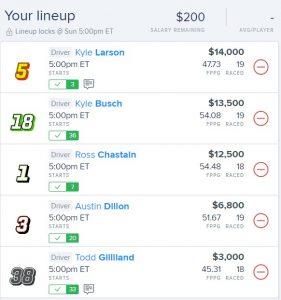