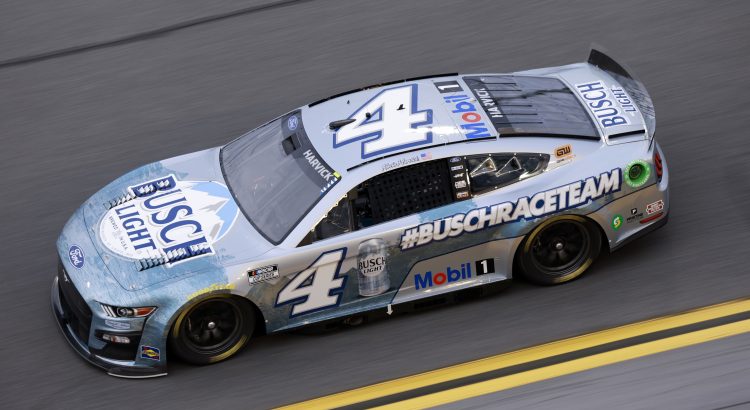 The NASCAR Cup Series travels to Phoenix this week for the Ruoff Mortgage 500K. We got to see what the Gen-7 car could do on a Superspeedway (Daytona), a two-mile oval (Auto Club) and a 1.5-mile intermediate track last week (Las Vegas). Now we get to see how the car will perform on a 1-mile short, flat track at Phoenix Raceway.

The story with the Gen-7 car so far this year has been parity and cautions. The same top teams continue to win the races (Hendrick Motorsports and Team Penske), but a lot of the smaller teams have been able to run in the top-10 (Erik Jones, Ross Chastain and Ricky Stenhouse Jr.). This trend should continue at Phoenix.

The cautions have been a major story too. The Cup Series set a record for cautions at Auto Club and they had the second-most cautions ever at Las Vegas. The trend at Phoenix is to have nine cautions throughout the race. If the trend of the cautions increasing by 50% continues, we should have between 14-16 cautions in the race Sunday. This will bring a lot of drivers who we do not think have value into play at Phoenix.

It is sure nice to have practice back. It makes handicapping these races a lot easier. The drivers who posted the best long-run speeds at Auto Club and Las Vegas were the drivers who ran up front in the race. I expect that trend to continue Sunday. It will be a good idea to select some of the drivers who ran well in practice for your lineups Sunday.

Here are the speeds from Saturday’s practice at Phoenix…. 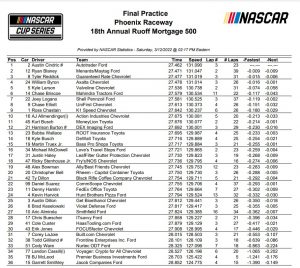 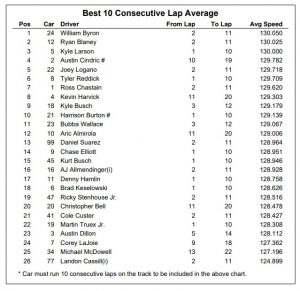 The Ruoff Mortgage 500K is scheduled for 312 laps. That means there are 78 points available for leading laps and 140.4 points available for fastest laps in DraftKings contests (31.2 dominator points available in FanDuel contests). That is a lot of dominator points and you will have a hard time winning your DFS contests if you do not have the top dominator in our lineup Sunday. We need to pay up for the drivers who we think can lead the most laps and score the fastest laps in the race. I will be building a lot of “stars and scrubs” lineups for the race this week.

The drivers with the best chance to be dominators include: Kyle Larson, Ryan Blaney, Denny Hamlin and William Byron 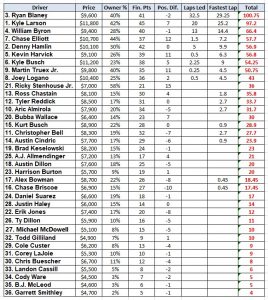 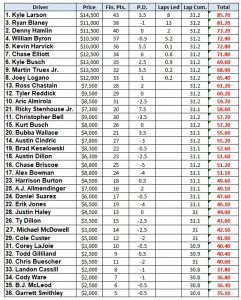 KYLE LARSON (DK $11.8K FD $14.5K): Larson won the last race at Phoenix and he has finished the last six races at the track in the top-seven (fourth-place average finishing position since 2017). Larson has speed again this week. He posted the fastest speed on all of the long-run speed charts in practice. Larson has to start in the back for “unapproved adjustments.” I am not worried about it. I hope it takes away from some of his ownership. I still expect Larson to dominate a large portion of the race Sunday.

KYLE BUSCH (DK $11.2K FD $13K): I have a feeling Busch wants revenge for the win he felt was taken away from him last week. He will have a good chance to get it Sunday. Busch finished five of his last eight races at Phoenix in the top-three (that includes two trips to Victory Lane). Busch was not blazing fast in practice but his car handles well. Busch starts 11th. It should not take him very long to get to the front.

CHASE ELLIOTT (DK $10.7K FD $12.5K): Elliott has led at least 90 laps in three of his last four races at Phoenix. He posted the eighth-fastest speed in practice and he qualified 19th. He should finish in the top-10 and be a lock for Cash Contests and a good pick for Tournament Contests too.

JOEY LOGANO (DK $10.4K FD $12K): Logano won on the short, flat track at the Los Angeles Coliseum and he looks fast this week. Logano posted the seventh-fastest speed in practice with the fifth-fastest 10-lap average speed.  Logano qualified 10th. He should have a good chance to finish in the top-10 and has a slight chance to be a dominator.

DENNY HAMLIN (DK $10.1K FD $11.5K): The No. 11 car has had a lot of speed but Hamlin has had a problem driving it. He had DNF’s in two of the three races and sits 30th in the Point Standings. He needs to turn his season around quickly and trip to Phoenix should be the medicine he needs to cure his problems. Hamlin finished five of the last six races at Phoenix in the top-five (including a win in 2019). Hamlin was not fast in practice but he was awesome in qualifying. Hamlin should lead some laps and finish in the top-five.

MARTIN TRUEX JR. (DK $9.8K FD $13.5K): I was planning on having Truex as one of my dominators Sunday but it looks like he will be one of the best picks for place differential points. His ownership is going to be high because of his starting position, so I like Truex more for Cash Contests. But the No. 19 can be a Tournament Contest winner too if he can lead some laps Sunday.

RYAN BLANEY (DK $9.6K FD $11K): NASCAR tested the Gen-7 car at Phoenix in January and Blaney had the fastest car. It looks like they found something in that test because Blaney is fast again. The No. 12 car posted the second-fastest speed in practice and he was second-fastest on all of the long-run speed charts. Blaney won the pole so he should lead a lot of early laps with Kyle Larson going to the back. Blaney is a good pick for Cash and Tournament Contest lineups this week.

WILLIAM BYRON ($9.4K FD $10.5K): Hendrick Motorsports won the last two races. Can they make it three in a row? I wouldn’t bet against them. Byron has had speed in every race this year. He looks fast again this week. Byron posted the fourth-fastest speed in practice and he was fastest on the 10-lap average speed chart. Byron qualified third. He is my third dominator behind Kyle Larson and Ryan Blaney.

KEVIN HARVICK (DK $9.1K FD $10K): The narrative with Harvick between 2012 and 2018 at Phoenix was that he could drive a dump truck to Victory Lane at Phoenix. He won six of the 10 races in that time period. He has cooled off a bit but Harvick hasn’t finished outside the top-10 at Phoenix since 2013 (17 races). Harvick posted the seventh-fastest speed on the 15-lap average speed chart in practice. Harvick starts 16th and should be a lock to finish in the top-10.

TYLER REDDICK (DK $8.5K FD $9.5K):  Phoenix is one of the worst tracks for Reddick. So why am I using him this week? Because Auto Club and Las Vegas were not great tracks for Reddick and he was fast. He also had one of the fastest cars at the short, flat track at the Los Angeles Coliseum. Reddick posted the third-fastest speed in practice and qualified 12th. I am hoping a lot of people fade Reddick based on his stats at the track.

CHRISTOPHER BELL (DK $8.3K FD $9K): All of the Joe Gibbs Racing cars looked fast last week at Las Vegas. I am going to have a lot of their cars in my lineup again this week. Bell finished ninth in both races at Phoenix last year so he knows how to run up front at this track. The No. 20 car was not very fast in practice but the Joe Gibbs Racing cars are set up to handle well. I will play Bell as a cheap driver to possibly get me some dominator points Sunday.

ROSS CHASTAIN (DK $8.1K FD $7.5K): I missed out on Chastain’s dominating performance last week. I doubt he will dominate the race Sunday, but he should be a good pick. Chastain posted the ninth-fastest speed in practice and qualified 17th.  I may be a week late, but I will take a chance with Chastain Sunday.

AJ ALLMENDINGER (DK $7.2K FD $7K): Allmendinger will be in the seat of the No. 16 car for Kaulig Racing. This car has had speed this year with Daniel Hemric behind the wheel. Allmendinger should be good too. He finished seventh in the Xfinity Series race at Phoenix Saturday. Now he gets to see what he can do in the Cup Series. Allmeindinger is a smart driver. He starts 29th and Allmendinger should stay out of trouble and finish in the top 20.

BUBBA WALLACE (DK $6.4K FD $4K) I wasn’t planning on playing Wallace this week and then he got loose in qualifying so now Bubba will start 27th. Bubba looked decent in practice. The No. 23 car posted the 13th fastest speed and he was 11th fastest on the long-run speed chart. Wallace should finish inside the top-20 “IF” he can stay out of trouble.

JUSTIN HALEY (DK $6K FD $4.5K): Will any of the speed from the short, flat track at the Los Angeles Coliseum translate into speed at Phoenix. The track this week is four-times larger than the Coliseum, but it is hard to ignore the speed Haley had in that race. Haley posted the 17th-fastest speed in practice and he qualified 28th. Haley should have a good chance to move up 8-10 spots Sunday.

TODD GILLILAND (DK $4.9K FD $2.5K):  Gilliland is priced on both sites like a driver who is just going to ride around the back and log laps. That is not what Front Row Racing does. I was praying Gilliland would qualify in the back to he would have a chance to score some place differential points. The prayers were answered. Gilliland starts 33rd and should have a good chance to finish in the top-25. That is good enough for his price.

NASCAR said they are going to crack down on teams messing with the chassis that they provide. I expect there will be a lot of cars who fail inspection early in the season. When the top cars fail inspection, it changes the DFS lineups completely. For this reason, I will post the final picks after the inspection is complete (60 minutes before the race). 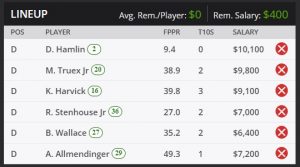 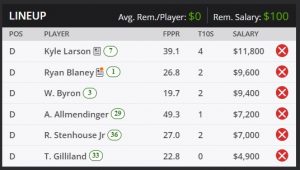 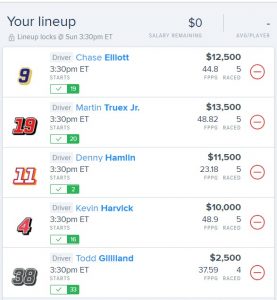 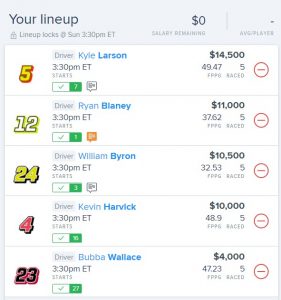