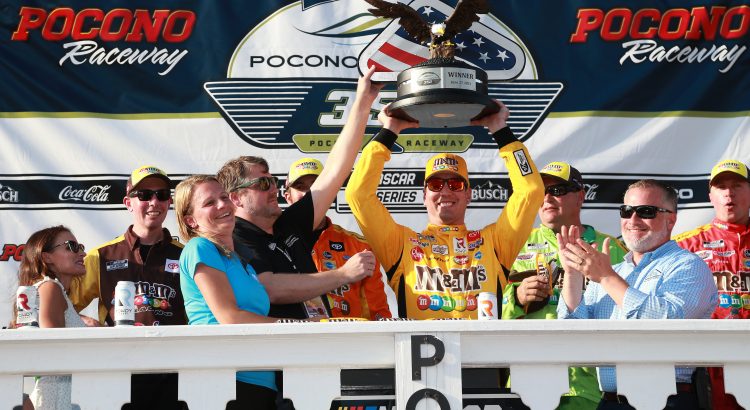 The NASCAR Cup Series will travel to Pocono Raceway Sunday for the M&M’s Fan Appreciation 400. The Cup Series had double-header race weekends for the last two years at Pocono. The races were 350 miles and run on Saturday and Sunday. There will only be one race at Pocono this year and it will be 400 miles in length. It is also going to be one of the most unpredictable races of the season since there is no track on the circuit to compare Pocono to. It will be interesting to see how the Gen-7 car runs at the “Tricky Triangle.”

The Cup Series had their regular practice schedule this week. The teams were broken down into two groups and they had 20 minutes to dial in their cars for the race. Pocono is a 2.5-mile, flat, triangle shaped track. The teams did not have time to make any long runs in practice but that doesn’t mean we did not learn a bit from practice. The cars were impounded after qualifying so the speed the cars had in practice is the speed the teams will start the race with Sunday. 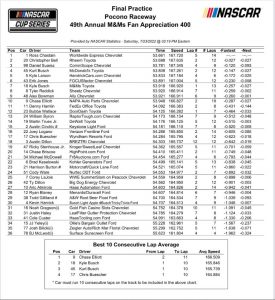 The race Sunday will be the first time the Gen-7 car has competed at Pocono. It would be great if we had some data to use to help predict this race, but Pocono is a unique track. Some driver’s say it races like a road course, others say it is like a Super Speedway because the draft can come into play on the long front and back-stretches. I am relying on practice speeds and momentum over the last month more than usual this week, but I will also look at the driver’s performances on the large tracks this year. This includes the 1.5-mile and 2-mile Intermediate tracks. 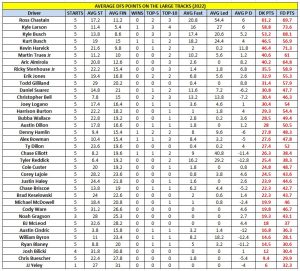 The race at Pocono is scheduled for 160 laps (400 miles). The last time the race at Pocono was 400 miles was in 2018 (The races were shortened for the Covid Double-Header Races). I looked at the races between 2016 – 2018 to help predict the dominator points this week.

Here are the drivers I expect to lead the most laps Sunday: Denny Hamlin, Kyle Busch, Chase Elliott, Christopher Bell and Kyle Larson 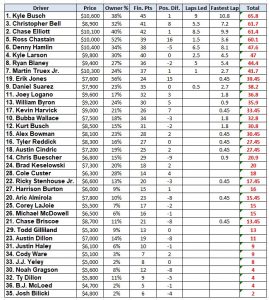 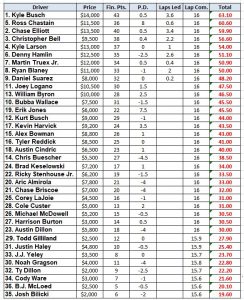 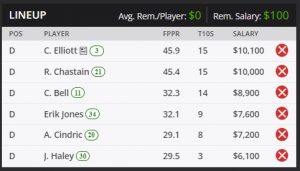 CHASE ELLIOTT ($10,100): I was shocked that Chase Elliott was not the highest-priced driver in DraftKings contests this week. I understand that the Tricky Triangle is not a good track for him, but the dude finished 2nd, 1st, 2nd and 1st in his last four races. No driver is running as well as Elliott right now. He posted the 10th fastest speed in practice with the third-best long-run speed. Elliott should score some dominator points and have a good chance to win the race Sunday.

ROSS CHASTAIN ($10,000):  Chastain has been fast all season and it is nothing different this week. Chastain posted the fastest speed in practice with the fastest long-run speed. The No. 1 car got loose in qualifying so now Chastain will start 21st. He is almost a lock to score 10-15 place differential points. He is the perfect driver for your Cash Contests at Pocono.

CHRISTOPHER BELL ($8,900): Bell has been the most consistent driver in the Cup Series on the non-Super Speedway and non-Road Course tracks. Bell finished 1st, 8th, 9th, 5th, 6th, 4th and 7th in his last seven non-Super Speedway and non-Road Course races. The No. 20 team brought another fast car to the track. Bell posted the 11th-fastest speed in practice with the second-fastest long run speed. Bell got loose in qualifying so he will start 11th. His car is fast enough to make it to the front and score some place differential points this week.

ERIK JONES ($7,900): Jones is the “free square” this week. Jones posted the sixth-fastest speed in practice with the fourth-fastest long-run speed. He was a threat to win the pole, but Jones overdrove the car and had to hit the brakes to prevent from hitting the wall. Now he has a car with top-five speed and he starts 34th. It doesn’t get much better than that.

AUSTIN CINDRIC ($7,200): Cindric won the Xfinity Series race at Pocono last year so he knows his way around the Tricky Triangle. Cindric had the fastest Ford in practice with the 12th-fastest long run speed. I debated between Brad Keselowski and Cindric for this spot, but I like the speed Cindric has over what Keselowski showed in practice.

JUSTIN HALEY ($6,100): Haley looked slow in practice, but I do not care. Haley always looks slow in practice. The No. 31 car starts 30th Sunday and that gives Haley a good chance to score some place differential points. Haley has not finished outside the top-30 in his last nine races. His average finishing position over the last two months is 16th. He will be an awesome pick if he can finish 16th Sunday. 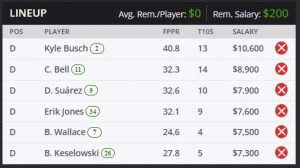 KYLE BUSCH ($10,600): My top two drivers for Sunday’s race are Chase Elliott and Kyle Busch. I played Elliott in the Cash Contest lineup so I will use Rowdy in the Tournament Contest lineup. Busch posted the seventh-fastest speed in practice with the sixth-fastest long-run speed. Busch is really good at Pocono so I will take a chance with the No. 18 car Sunday.

CHRISTOPHER BELL ($8,900): I really like Bell for all Fantasy NASCAR games this week. He has been one of the most consistent drivers in the Cup Series this year and his car has top-five speed. Bell could easily win another race this week.

DANIEL SUAREZ ($7,900): Everyone is going to play Ross Chastain Sunday so I will pivot and play his teammate. Suarez has been just as good as Chastain over the last month. Suarez finished 9th, 6th, 5th, 15th and 1st in his last five races. His car posted the third-fastest speed in practice so I am not worried about Suarez scoring negative place differential points. His car has speed.

ERIK JONES ($7,600): I know Jones will likely be the highest owned driver in the contest this week but you really do not get any benefit if he crashes. Jones is all upside and no downside this week. I will eat the chalk and play Jones Sunday.

BUBBA WALLACE ($7,500): The majority of the people who play DFS NASCAR do not like Wallace. I will use this to my advantage this week. Wallace finished third last week so he has some momentum. He also finished fifth at Pocono last year and his car in 2021 was not as fast as the car he has this week. I will play a low owned Wallace Sunday.

BRAD KESELOWSKI ($7,300): Keselowski has not been good this year but the RFK Racing cars are starting to show some improvement. Keselowski is always one of the best drivers at Pocono. If his team can get the notes from Chris Buescher’s team (Buescher qualified fifth), Keselowski should be able to move up from the 26th starting position. 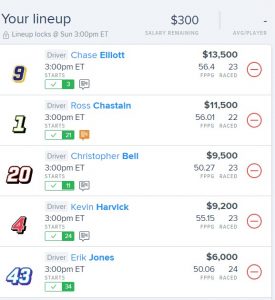 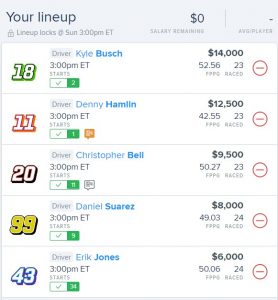