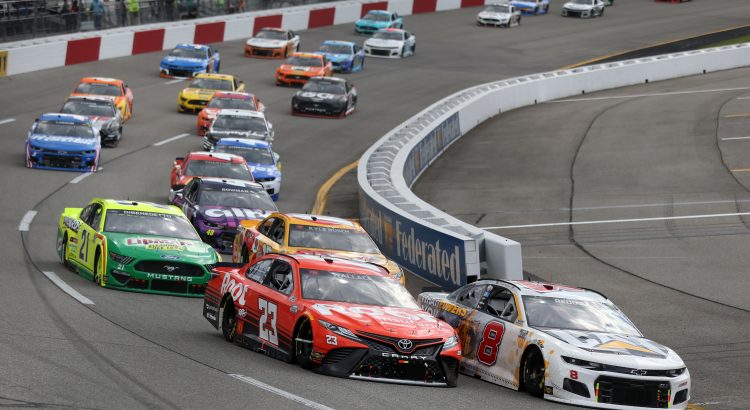 The NASCAR Cup Series will travel to Richmond Raceway this week to start the short track portion of their schedule. This race is typically dominated by the veteran drivers but there is a youth movement in the Cup Series. It will be fun to see if the young drivers continue to dominate or will this be the race when Denny Hamlin, Martin Truex Jr., Kyl Busch and Kevin Harvick return to the front of the field. It should be fun to watch. The Toyota Owners 400 can be seen Sunday at 3:30 p.m. ET o FOX.

PRACTICE SPEEDS FOR THE RICHMOND

The Cup Series had their normal practice session Saturday. The teams were broken down into two groups and allowed to practice for 20 minutes. That is not a lot of time but Richmond is a .75-mile track. Most of the teams were able to make at least one long run in practice. That should give us an idea of which cars have speed for the race Sunday. It is also important to know that Richmond wear out tires quickly. The drivers who were fast on the long-runs in practice should have the speed in the race.

Here are the practice speeds from Saturday’s practice session… 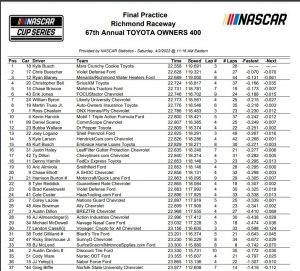 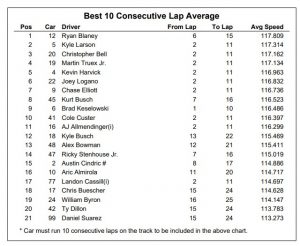 My strategy this week is to pay up for as many dominators as possible. It really does not matter what our cheap drivers in our lineup do if our top drivers score most of the 180 bonus points that are available Sunday. 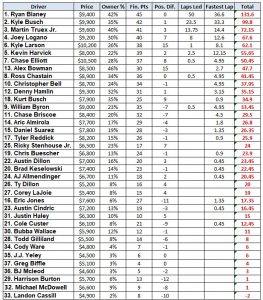 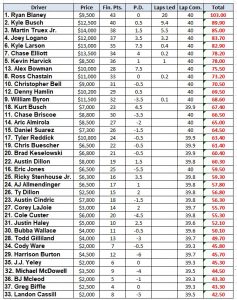 KYLE LARSON (DK $10.2K FD $13K): Richmond is not the best track for Larson but he did win here in 2017 and he looked fast in practice. Larson posted the second-fastest long-run speed in practice and he qualified 21st. Larson has a good chance to score a lot of place differential points and his car has the speed to lead some laps if Larson can get to the front.

KYLE BUSCH (DK $9.9K FD $12.5K): Busch has been a lot faster than the results show this year. He has a series-high six wins at Richmond and Rowdy has not finished outside the top-10 at this track since 2017 (8 races). Busch posted the fastest speed and qualified third. Busch will have a good chance to lead some laps and finish up front Sunday.

MARTIN TRUEX JR. (DK $9.6K FD $14K): Truex has been the best driver at Richmond over the last three seasons and it has not even been close. Truex finished 1st, 5th, 2nd, 1st and 1st in his last five races at Richmond. So can he run that well in the Gen-7 car? Truex posted the fourth-fastest speed on the long-run chart and qualified sixth. Truex has been one of the top dominators in seven of the last eight races at Richmond. He will have a good chance to score some more dominator points Sunday.

RYAN BLANEY (DK $9.4K FD $9.5K): Blaney was fast at Phoenix and he looked fast in practice. Blaney led a race-high 143 laps, scored 52 fastest laps and finished fourth at Phoenix (96 DK Points). The No. 12 car posted the fastest speed on all short and long-run speed charts in practice. Blaney won the pole too. The No. 12 car is by far the fastest in practice and qualifying. If Blaney can keep it out of trouble, he should be one of the top dominators Sunday.

DENNY HAMLIN (DK $9.3K FD $10.2K): Can we trust Hamlin Sunday? He is always good at the short tracks in his home state of Virginia. Hamlin finished both races at Richmond in second-place last year and he was the top dominator in both races. He knows his way around this track. Hamlin was slow in practice and he qualified 13th. I expect a lot of people will avoid Hamlin since he has sucked this year and he sucked Saturday. I will play him in Tournament contests because Richmond is one of his best tracks.

JOEY LOGANO (DK $9.2K FD $12K): Logano has been one of the most consistent drivers at Richmond. He has a fifth-place average finishing position at Richmond since 2013 (15 races). That is a lot of success at a track. Logano has been fast this year and he looked fast in practice. Logano posted the sixth-fastest long-run speed and qualified 11th. Logano will have a good chance to socre some place differential points and lead some laps and finish up front Sunday.

ROSS CHASTAIN (DK $8.9K FD $11K): Chastain has been the best driver in the Cup Series over the last month. Chastain finished third (Las Vegas), second, (Phoenix), second (Atlanta) and he won last week at COTA. You do not fade a driver on a hot streak like this. I would not be surprised if Chastain won again Sunday. He finished seventh at Richmond last year in a car with a lot less speed. Chastain posted the ninth-fastest speed in practice and qualified eighth. Chastain is still too cheap to ignore on DraftKings.

CHRISTOPHER BELL (DK $8.7K FD $9K): It is tough to trust Joe Gibbs Racing this year but it looks like they have some fast cars this week. Richmond is one of the best tracks for Bell. He finished third and fourth in his two races at the track last year. Bell looks fast again this week. Bell posted the third-fast speed on the long-run chart in practice and qualified ninth. The No. 20 car will be a good value play for your DFS lineups.

ALEX BOWMAN (DK $8.5K FD $10K): Bowman “backed into a win” at Richmond last year. He only led 10 laps and scored 11 Stages Points on his way to Victory Lane. The No. 48 team is running better in 2022 than they were last year. Bowman was horrible in practice and qualifying but he has some good teammates to lead on for help. Bowman starts 28th and he has a good chance to score 15-20 place differential points. Bowman is a lock for Cash contest lineups Sunday.

CHASE BRISCOE (DK $8.4K FD $8.8K): Briscoe dominated the race at Phoenix and that speed should translate into success at Richmond. Briscoe led 101 laps and scored 12 Stages on his way to Victory Lane. There is a good chance Briscoe will be good again Sunday. The No. 14 car posted the fifth-fastest speed in practice and qualified fourth. There is a lot of risk in using Briscoe Sunday since he starts so close to the front, but I will take a chance with Briscoe in some Tournament contest lineups and hope he can have a race like he did in Phoenix.

KEVIN HARVICK (DK $8K FD $8.5K): Harvick had his best race of the season on the short, flat track at Phoenix. He started 16th and he finished sixth. Harvick has been good at Richmond in his career. He has finished six of his last seven races at this track in the top-10. Harvick typically does not post fast speeds in practice, but when he does, the No. 4 car is usually fast in the race. Harvick posted the fifth-fastest long-run speed in practice and he starts seventh Sunday. Harick is too cheap on both sites so I will play him in some Tournament contests Sunday.

KURT BUSCH (DK $7.9K FD $7K): Busch has been good at Richmond when he had good cars. He was not very good in the No. 1 car for Chip Ganassi Racing, but he stacked top-10 finishes at the track while driving for Stewart-Haas Racing. Now we get to see what Busch can do for 23XI Racing. Busch was awful in practice and he qualified 27th. The No. 45 team has 400 miles to fix up the car. Busch should move up 12-15 spots and be a lock for Cash contests Sunday.

DANIEL SUAREZ (DK $7.8K FD $7.3K): Trackhouse Racing has had a lot of speed this year so both of their drivers are in play. Suarez usually finishes between 15th – 20th at Richmond, but this could be the year when he breaks into the top-10. Suarez finished ninth at Phoenix and he had decent speed in practice. I will take my chances with the No. 99 car in a few of my lineups Sunday.

AUSTIN DILLON (DK $7K FD $8K): Richmond has been one of the best tracks for Dillon. He finished five of his last six races at the track in the top-11. Richard Childress Racing has had a lot of speed this year with Tyler Reddick. Sooner or later that speed will show up in the No. 3 car too. Dillon starts 25th and he should be able to move up 8-10 spots in the race.

AJ ALLMENDINGER DK $6,7K FD $6.5K): Allmendinger is a road course ace but I will take a chance with the No. 16 car in a few lineups. Allmendinger posted the 11th fastest long-run speed in practice and he starts 25th Sunday. It will also help that he had the Xfinity Series race to get his rhythm down for the race. He should be a good value pick at Richmond.

TY DILLON $5.2K FD $2.5K: Dillon was a decent play at Phoenix and he should be a good “punt play” Sunday. Dillon started 21st and finished 15th (34 DK Points), easily returning value on his $5K price tag. Dillon starts 30th Sunday and he should be able to move up 8-10 spots in the race and return value again. 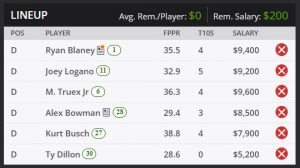 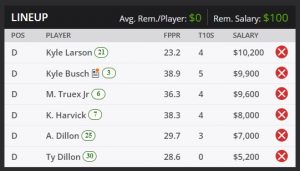 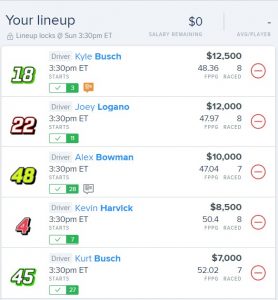 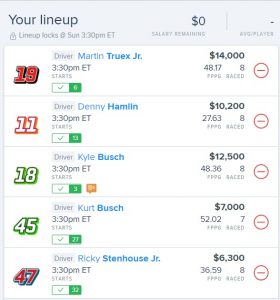 * I am going to take a chance with a Toyota Stack in the FanDuel contest in the Toyota Owners 400. This is probably not my best lineup, but it is an example of a lineup that could work if the Toyota’s hit the setup right and their new pit-stop strategy gains them an advantage.