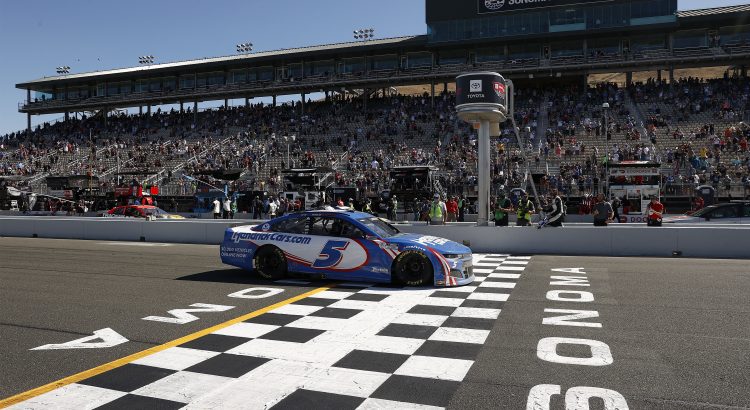 Buckle your seat belt, the NASCAR Cup Series is going road course racing at Sonoma Raceway this week. The Gen-7 car was designed to be able to navigate the road courses better than the previous cars used at the track because of the independent rear suspension. So far, the new car has produced some exciting racing in 2022. The Toyota / Save Mart 350 has a good chance to be one of the best road course races ever. We have a good car for the track and we have hot tempers ready to explode… what more could you ask for?  The Toyota / Save Mart 350 can be seen Sunday at 4 p.m. ET on FS1.

The only thing that sucks about this race is that it is the last race for Fox. I was worried about how Fox would replace Jeff Gordon in the booth, but I think they did a fantastic job by rotating drivers into the booth with Mike Joy and Clint Bowyer. I am not a fan of NBC and it is going to be crazy this year with the races on NBC, USA and practice on CNBC. Maybe someday my wish will come true and Fox will get the entire season with Mike Joy, Clint Bowyer and Dale Earnhardt Jr. in the booth. One can only dream. Now onto the picks…

The Cup Series was back to their normal practice session this week. The teams had 20 minutes to dial in their cars and then they had their group qualifying. 20 minutes is not enough time on a 2.5-mile track to make many long runs. I doubt we will learn much from the practice Saturday but it doesn’t hurt to look at the speeds. 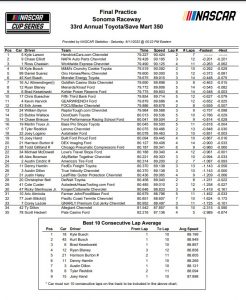 I do not expect the race Sunday to be a one dominator race. The Gen-7 car is difficult to drive so we will see more drivers spinning out and more restarts. That means we will have more drivers with a chance to lead laps. I expect this race to play out like the 2017 race at Sonoma (before NASCAR made the cars easy to drive). Martin Truex Jr. led 25 laps, Kevin Harvick led 24 laps, Brad Keselowski led 17 laps, Jimmie Johnson led 12 laps and Denny Hamlin led 11 laps. The dominator points will be irrelevant this week if this is how the race plays out. 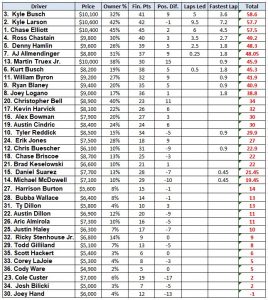 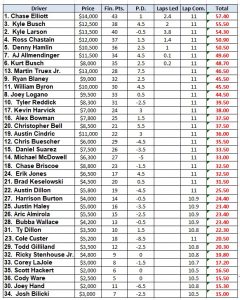 KYLE LARSON (DK $10.6K FD $13.5K): Larson won this race last year. He was really excited to win at his home track and he should be extra motivated to do it again. Larson is the best in the series at qualifying at Sonoma. He has won the pole in his last four starts and he won the pole again Saturday. Once Larson gets the lead, he usually dominates the race at Sonoma. I expect the same to happen this week.

CHASE ELLIOTT (DK $10.4K FD $14K): Elliott has won four of the last 10 road course races and has averaged 31 laps led per race at Sonoma. The No. 9 car should spend a lot of time up front, scoring Stage Points with a good chance to win Sunday. Elliott is going to be highly owned Sunday but it may be hard to win your contest without the No. 9 car in your lineup.

KYLE BUSCH (DK $10.1K FD $12.5K): There are a lot of reasons to like Rowdy this week. He has been on fire for the last month with finishes of 2nd, 2nd and 3rd in his last three races. Now he gets to work on his skills at Sonoma in the Truck Series race Saturday. Busch is always better in his Cup Series car when he competes in a lower-level series race. Busch has finished four consecutive races at Sonoma in the top-five. He is a good pivot from Chase Elliott and Martin Truex Jr. Sunday.

MARTIN TRUEX JR. (DK $10K FD $13K): Truex is a lock to go to Victory Lane Sunday if this race was determined by stats. The No. 19 car finished 3rd, 1st and 1st in his last three races at Sonoma. It would have been three wins and a 3rd-place finish if his engine did not expire in 2017 when he had a 5 second lead over the field. Truex has Cole Pearn back in his pits this week but so far it has not helped. Truex hated his car in practice and he qualified 28th for the race. They should get Truex fixed up and he should be one of the highest place differential drivers in the field.

ROSS CHASTAIN (DK $9.8K FD $12K): Chastain is one of the underrated drivers on the road courses. He won the race at COTA earlier this year and he finished seventh at Sonoma last year. Chastain had some extra track time since he competed in the Truck Series race Saturday. That extra seat time should help Chastain figure out the rhythm on this technical track. I will take a chance with Chastain Sunday.

DENNY HAMLIN (DK $9.6K FD $10.5K): Hamlin has never won at Sonoma but he probably should have a Sonoma trophy in his collection. Hamlin had the race won in 2016 when he got loose in the final turn and handed the win the Tony Stewart. Hamlin has the fourth best average finishing position at Sonoma so he knows his way around this track. Hamlin will finish in the top-five if he can avoid mistakes (that has been a problem for the No. 11 team this year). I will use Hamlin in some tournament contests because of his upside Sunday.

CHRISTOPHER BELL (DK $8.9K FD $8.5K): Bell is on a hot streak right now. He has finished five of the last six races in the top-10 and he has finished nine of the 15 races this year in the top-10. He has been good on the road courses so Bell had power-steering problems in qualifying so they took the car to the garage to fix the problem. He will start in the back and be scored from the 31st starting position. Bell should be a lock for all Cash Contests this week.

AJ ALLMENDINGER (DK $8.8K FD $11.5K): Allmendinger is one of, it not the best road course driver in the field. He just needs a car to match his skills. Allmendinger posted the fastest laps in Group A in practice. He then said his car sucked. Allmendinger qualified 16th and he should still be good enough to finish in the top-10 in a car he does not like.

TYLER REDDICK (DK $8.5K FD $8.3K): Reddick only has one start in the Cup Series at Sonoma on his resume. He started 10th and finished 19th last year. He was good on the other road courses and he finished fifth at COTA earlier this year. Reddick qualified fifth so I doubt he will be highly owned. I will take a few chances with Reddick in Tournament Contests Sunday.

AUSTIN CINDRIC (DK $8.4K FD $11K): Cindric is one of the best road course racers in the Cup Series. He does not have much experience at Sonoma but at least he had a practice session to figure out the track and he should have some good notes from Team Penske. Cindric starts 25th so he should score at least 10 place differential points at Sonoma.

KURT BUSCH (DK $8.2K FD $8K): Busch has been on a hot streak over the last month. He won at Kansas last month and finished 3rd last week at WWT Raceway. Now Busch gets to compete at Sonoma. He has finished five of the last six races at this track in the top-10. That includes a sixth-place finish last year. His 23X1 Racing car, built by Joe Gibbs Racing, will have more speed than what he had last year with Chip Ganassi Racing. Busch is a good value pick this week.

ALEX BOWMAN (DK $7.9K FD $7.8K): Bowman is not the first name that comes to mind when you think of road course racers but is Bowman at the top of the list at any track? The stats suggest Bowman should be one of the safest picks in the field Sunday. The No. 48 car finished second at COTA this year and Bowman has the fourth-best average finishing position in the last 10 road course races. Bowman finished ninth at Sonoma last year and he should finish in the top-10 again Sunday from the 19th starting position.

DANIEL SUAREZ (DK $7.7K FD $7.5K): Suarez will have a fast car and the talent to finish in the top-10 Sunday. The problem is… does he have the mental focus it takes to get to the checkered flag? The No. 99 team consistently runs up front and consistently finishes in the back. Maybe this will be the race when Suarez puts it altogether. I will take a chance with my Amigo in 10% of my Tournament Contest lineups this week.

ERIC JONES (DK $7.5K FD $6.5K): Jones has been one of the better value picks in DFS this year and that should not change at Sonoma. Jones has been a good pick in DFS contests at the road courses. He started 18th and finished 11th at Sonoma last year. He was in the winning lineup at COTA this year when Jones started 30th and finished 9th. He starts 33rd Sunday and if the trend from COTA continues; Jones should finish 12th Sunday.

MICHAEL MCDOWELL (DK $7.1K FD $6.3K): Do not count out McDowell this week. He shocked everyone when he led 34 laps last week at WWT Raceway. His Driver Ranking at Sonoma is good but the results are not. This tells me that McDowell has some upside because he typically runs up front but bad luck causes him to finish outside the top-20. McDowell has a high ceiling and a low floor in DFS this week. He is cheap enough to take a chance with Sunday.

AUSTIN DILLON (DK $6.9K FD $5.8K): Dillon was my sleeper pick on the road courses last year and it worked out in most races. Dillon is always low owned because people do not view him as a good road course racer. He is getting better though. Dillon had the Truck Series race as practice this week. That should help him Sunday. Dillon finished 13th at Sonoma last year. He has top-12 upside this week. 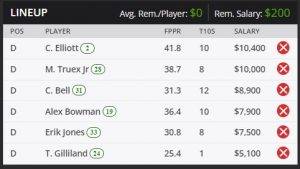 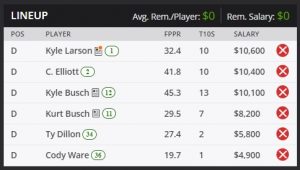 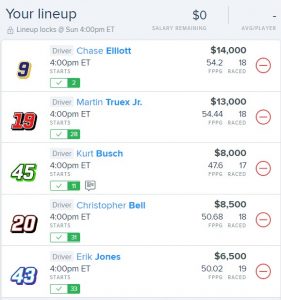 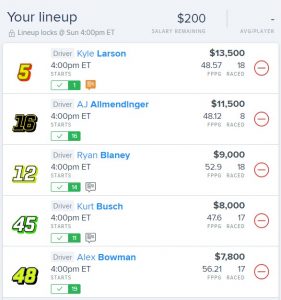