The PGA Tour will travel to Dallas, Texas for the AT&T Byron Nelson this week. This will be the last tune-up for the golfers before the second major of the season next week (The PGA Championship). This tournament was originally played at Trinity Forrest Golf Club but it was moved to TPC Craig Ranch this year. The new course has no defense for the elite golfers in the field. K.H. Lee won with a score of 25 under par. There were six golfers who shot at least 20 under par, so it you like scoring, this is the tournament for you.

The field will be pretty good this week. The golfers who will be teeing it up Thursday includes Scottie Scheffler, Justin Thomas, Dustin Johnson, Brooks Koepka, Hideki Matsuyama, Xander Schauffele, Jordan Spieth, Adam Scott, Tommy Fleetwood, Marc Leishman and Will Zalatoris. We should be able to put together some good DFS lineups this week.

The AT&T Byron Nelson will be played at TPC Craig Ranch for the second time this week. This is a Tom Weiskopf designed course which plays as a par 72 and 7,468 yards in length. The course served as the Qualifying School for the Korn Ferry Tour and hosted many Korn Ferry Tournaments. Some of the golfers who came to the PGA Tour through that tour should know the course well.

The course has rolling hills through the Zoysia grass fairways and the golfers will have to avoid Rowlett Creek. This creek crosses the course 14 times and it could come into play if the golfers are wild off the tee.

The course is not too difficult. The Korn Ferry golfers typically shot 16 under par in their tournaments so we should see some low scores this week. 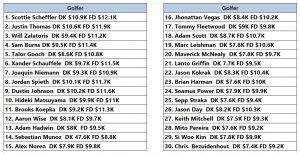 My strategy in Cash Contests two weeks ago was to pay up for Jon Rahm since he was the class of the field. He almost won me the contest by himself. I used the same strategy last week with Rory McIlroy and it barely worked. I am paying up for Scottie Scheffler this week in Cash Contests because if he is anywhere close to the form he was in a month ago, Scheffler will be the class of the field this week. There is enough value in the lower $7K price range to make this strategy work.

My strategy for Tournament Contests will be to “spread the wealth”. This is an easy course so the lower priced golfers will have nearly the same chance to play well as the higher priced golfers. The problem is that it is tough to tell which golfer will have the hot putter this week. For that reason I will not have more than 25% ownership of any golfer in the field. I want as many bullets as possible to take down a Tournament Contests this week. 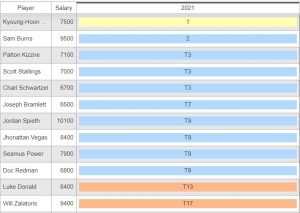 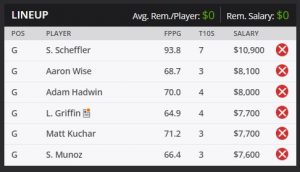 SCOTTIE SCHEFFLER ($10,900):  I will start off my Cash Contest lineup with the best golfer on the planet right now. Scheffler won three tournaments this year (The Masters, Arnold Palmer and Waste Management Phoenix Open). He ranks No. 1 in the key stats and this is a home game for the Texas native. We want safe golfers in our Cash Contest lineup. It does not get any safer than Scheffler this week.

AARON WISE ($8,100): Wise checks all of the boxes for me this week. He is in good recent form after his 6th-place finish in the Mexico Open and his 21st-place finish in the RBC Heritage. Wise ranks 14th in the key stats because of his Tee-to-Green game (ranks 3rd) and his approach game (ranks 6th). Wise finished 17th in this tournament last year and he should finish in the top-15 Sunday.

ADAM HADWIN ($8,000): Hadwin has not played for a while but if he shows up in the same form he had in his last tournament, he will be an excellent value pick Sunday. Hadwin finished 9th, 7th, 4th and 26th in his last 4 tournaments. He ranks 5th in the key stats this week because of his Tee-to-Green game (ranks 5th), approach game (ranks 3rd) and his scrambling (ranks 9th). Hadwin should be a safe play for your Cash Contest lineups.

LANTO GRIFFIN ($7,700): Griffin is a streaky golfer and he is starting to heat up now. He finished 6th last week in the Wells Fargo Championship and 15th the previous week in the Mexico Open. If Griffin can get off to a good start he might win. He had one of the lowest rounds on Sunday in the last two tournaments. Hopefully that momentum carries over to this week.

BRIAN HARMAN ($7,600): Harmon is playing well right now. He has made 4 of his last 5 cuts. His only missed cut was at the Masters. That course does not fit his game well. He did finish 9th last week at the Wells Fargo Championship though. Harmon ranks No. 1 in Shots Gained Off-the-Tee and 13th overall in the key stats. He is a steady golfer who should make the cut and finish in the top-20 Sunday

MATT KUCHAR ($7,600): Brian Harmon withdrew so I will replace him with Kuchar. He has been playing well lately. Kuchar finished RBC Heritage and 2nd at the Valero Texas Open last month. This is an easy course so I expect Kuchar should be in the mix Sunday.

SEBATIAN MUNOZ ($7,600): Munoz will be another golfer I like because he is a safe play this week. He is really underpriced on FanDuel. Munoz has made seven cuts in a row. His last missed cut was in January and he has only missed one cut since November. Munoz ranks 17th in the key stats this week. He is a good golfer to have at the bottom of our Cash Contest lineup Sunday. 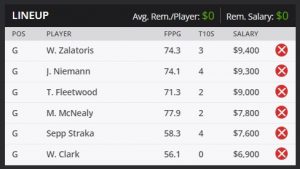 WILL ZALATORIS ($9,400):  I expect that most people will be paying up for the shiny toys in the $10K price range this week, so I will pivot and play golfers below the mid-$9K range. Zalatoris has the upside to win Sunday. He ranks No. 1 in Shots Gained Tee-to-Green, No. 2 in Shots Gained Approach and No. 2 overall in the key stats. Zalatoris ranks 117th in Shots Gained Putting. If he can get the flat-stick rolling this week, he will win.

JOAQUIN NIEMANN ($9,300): OK, so I have the golfer who ranks No. 1 in Shots Gained Tee-to-Green in my lineup, why not include the golfer who ranks No. 2 as well? That golfer is Niemann. He also ranks 12th in Shots Gained Approach, 10th in Scrambling and 18th in Putting. Niemann ranks No. 2 overall in the key stats this week. He won the Genesis Invitational earlier this year so he proved he can win in these strong fields.

TOMMY FLEETWOOD ($9,000): Fleetwood always gets overlooked in DFS and I expect his ownership will be lower than it should be this week. His form is good. Fleetwood has made 5 cuts in a row and that includes 3 consecutive top-16 finishes. He also ranks No. 1 in the field in Shots Gained Putting and No. 6 overall in the key stats. There is a lot to like about Fleetwood this week.

MAVERICK MCNEALY ($7,800): Maverick “can be my wingman anytime.” He is probably the second safest pick in the field behind Scottie Scheffler and McNealy has some upside. He has made 12 cuts in a row. His last missed cut was early last October. I really think McNealy is going to win a tournament this year. I want him in my DFS lineup when it happens. McNealy is a good value pick for $7,800.

SEPP STRAKA ($7,600):  Straka burned a lot of people last week with a missed cut. I expect that is going to lower his ownership at the AT&T Byron Nelson. Straka was in great form before his missed cut. He finished 9th in THE PLAYERS and 3rd in the RBC Heritage. Straka ranks 17th in Shots Gained Tee-to-Green, 2nd in Shots Gained Putting and 4th overall in the key stats. I will trust the numbers and go back to Straka this week.

WYNDHAM CLARK ($6,900): I typically do not include golfers priced below $7K in my Tournament Contest lineups, but Clark is a great value this week. TPC Craig Ranch is a bombers course. Why not have the golfer who ranks No. 1 in the field in distance off-the-tee? Clark has made 4 cuts in a row and his length off-the-tee should allow him to extend the streak this week. Clark will not finish in the top-10, but he does have top-25 upside this week. That is not bad value for under $7K. 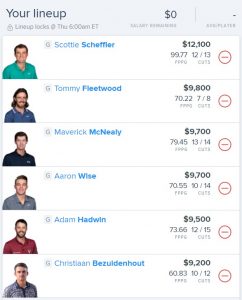 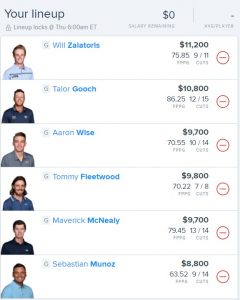 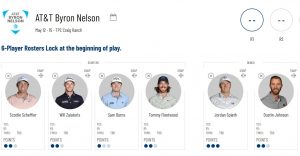 * This is the eighth tournament of Segment 3. We still have the PGA Championship and the Memorial Tournament in this section. I think you can get through those tournaments with the players not entered this week, so fill free to use the best golfers for your lineup at the AT&T Byron Nelson. No need to save allocations.