The West Coast Swing portion of the schedule is complete and now the PGA Tour will head to PGA National in Palm Beach Gardens, Florida for four straight tournaments in the “Sunshine State.” Most of the top golfers are taking the week off as they prepare for THE PLAYERS in two weeks. The only highly-ranked golfers in the field are Louis Oosthuizen, Brooks Koepka, Daniel Berger and Tommy Fleetwood.

PGA National plays 7,140-yards in length and is a par-70. If this course had a water slide it could officially be considered a water park. There is that much water to deal with. What made PGA National incredibly difficult in the past were the small greens. The Nicklaus Design Company decided to add 14,000 square feet of putting surface to the course (Roughly 800 square feet per hole). That should make the approach shots a little easier but the golfers will still need to be accurate this week.

The drinking game word of the week will be “Bear Trap.” This consists of holes 15, 16 and 17. These three holes rank as some of the toughest on tour. Do not get too excited about your DFS lineups until your golfers are in the clubhouse. These three holes could destroy your lineups.

Key Stats for the Honda Classic

– Accuracy of the Tee 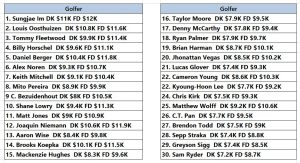 My strategy for this tournament will be to play a lot of lineups with two golfers from the $9K, one from the $8K and the rest from the mid to high $7K range. The low $7K and $6K ranges stink this week. The PGA Tour could send them all to the Saudi Tour and I would be perfectly fine with it. My goal is to simply have six golfers make it to the weekend. This tournament has so many midfields (with the incredibly tough holes and the incredibly inconsistent golfers) that we will win with nearly every lineup that has six golfers playing the weekend. 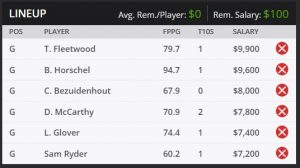 Tommy Fleetwood ($9,900):  I like to have golfers in good form and good course history in my Cash Contest lineups. Fleetwood checks both boxes. He has made every cut this year on the PGA and Euro Tours and he finished 3rd (2020) and 4th (2018) in his two trips to PGA National. Fleetwood should be a safe pick this week with a good chance to win.

Billy Horschel ($9,600): Horschel is a Florida native that tends to play well in his home state. Horschel is also in good form and ha good course history. He finished 6th (WMPO) and 11th (Farmers) in his last two tournaments. He also made four of his last five cuts in this tournament. That includes a pair of top-10 finishes. This is “Billy Horschel Week”.

Christian Bezuidenhout ($8,000): I typically do not play golfers who do not have any course history in my Cash Contest lineup but I trust Bezuidenhout this week. He ranks second in the field in strokes gained at comparable courses, 8th in the key stats and he has never missed a cut in the state of Florida. Bezuidenhout should make another cut this week.

Denny McCarthy ($7,800): PGA National is the home course for McCarthy and he proved last year with his 3rd-place finish that he knows his way around this tough course. McCarthy missed his last cut at the WMPO but that is a long course with Poa Annua greens. McCarthy is at his best at course where accuracy is the key with Bermuda Greens. McCarthy ranks 4th in my Key Stats. He should play well at home this week.

* You can also pivot to Ryan Palmer ($7,900). His course history is top-10 in the field, but I went with McCarthy over Palmer because Ryder has much better recent form.

Lucan Glover ($7,400): Glover is always a golfer I target at PGA National. This is one of his best courses. Glover has made four of his last five cuts in the Honda Classic. That includes a 4th-place finish in 2019. Glover is also in decent form. He has made four of his five cuts this year, including a 5th-place finish at the Sony Open. That course is similar to PGA National.

Sam Ryder ($7,200): I debated between Zach Johnson and Ryder for the last spot in my Cash Cotest lineup. Both are in decent form and have good course history, but Ryder has more upside. Ryder has made four of his five cuts this year. He finished 8th in this tournament last year and 53rd in 2020. He ranks 7th in Bogie Avoidance and that is important this week. 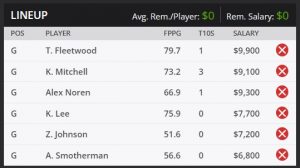 Tommy Fleetwood ($9,900): Last week I recommended Matthew Fitzpatrick for both lineups and he W/D one hour before the tournament started. Hopefully I do not have the same luck with Fleetwood this week. He said he is dedicated to playing better on the PGA Tour and so far, so good. He has never finished outside the top-five in the Honda Classic, so I will use Fleetwood in both lineups.

Keith Mitchell ($9,100): Mitchell won this tournament in 2019. Can he do it again? I think there is a good chance that he can. Mitchell is in great form. He finished 7th (Sony Open), 12th (Pebble Beach) and 10th (WMPO) this year. He ranks 1st in Shots Gained Off-the-Tee, 3rd in Shots Gained Tee-to- Green, 5th in Ball-Striking and 2nd overall in the Key Stats. All of the stats suggest Mitchell will finish in the top-five Sunday.

Alex Noren ($9,300):  Noren started off the season playing horrible golf but he seems to have found his game. Noren finish 39th (Farmers), 6th (WMPO) and 48th (Genesis) in his last three tournaments. That is not great, but he typically plays better in Florida than he does in California. Noren finished 3rd in this tournament in 2018. He has the upside to do it again this week.

K.H. Lee ($7,400): I had Lee in my Tournament Contest lineup last week and he was one of the only golfers in the lineup who performed well. I will go back to Lee this week. He has made eight cuts in a row so the form is fantastic. He has also made two of his last three cuts in this tournament. That includes a 7th-place finish in 2019. Lee should make the cut and have top-10 upside this week.

Zach Johnson ($7,200): I like having safe golfers who are low owned. Johnson has not had more than 5% ownership all season. He will have a good chance to make the cut this week and no one will have him. Johnson has made four of his last five cuts on tour. He has also made four cuts in a row in this tournament. That includes an 8th-place finish last year. I would be thrilled with another top-10 finish from Johnson Sunday. 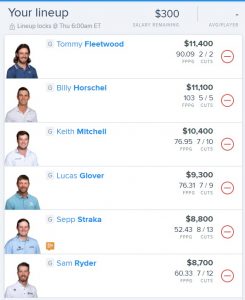 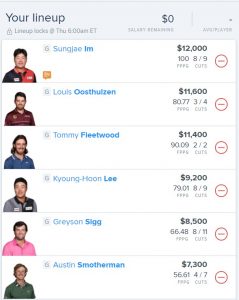 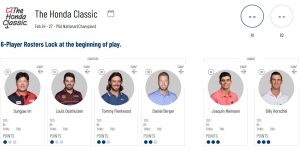 * This is the 8th tournament of Segment 2. There are 10 tournaments in this segment. We do not need to worry about saving our top golfers this week because the field is filled with the best golfers in the world. Just use the golfers you think are the best.

My One & Done Pick is: Sungjae Im (Honda Classic)

Best Bets for the Honda Classic