The PGA Tour travels to “Jack’s Place” this week for the Memorial Tournament. Whenever a tournament is hosted by Jack Nicklaus, you know the field will be strong. That is what we have this week. The field at the Memorial Tournament looks like a field we would have at a major championship. 32 of the top-50 players in the world will tee it up Thursday. That means it should be a fun week to play a DFS contest.

The golfers will see an updated Muirfield Village this week. The course is a par 72 which plays 7,540 yards in length. That is almost 100 yards longer than it has played in the past.

Key Stats for the Memorial

– Accuracy off the Tee 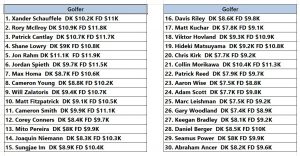 Just like last week’s tournament, the Memorial is an invitational tournament. That means the field consists of 120 golfers, instead of the normal 156 field event. The top-65 and ties will play the weekend. That means at least 55% of the field will make the cut. It also means we will need 6/6 golfers in our lineup to play the weekend if we want to win some cash at the Memorial.

My Cash Contest lineup is going to look weird this week. I like Brendan Steele and Lucas Glover to make the cut and their salaries allow me to build a good “stars and scrubs” lineup. I typically never use this strategy in Cash Contests but in a small field where nearly 60% will play the weekend, it should work well.

Both “stars and scrubs” and a balanced lineup should work in Tournament Contests. I really like the $8K and high $7K price ranges this week so the majority of my Tournament Contests will use the “balanced lineup” approach. I hate the low $7K range this week, but there is some value in the $6K price range. I will also play some “stars and scrubs” lineups with the $9K range. Jon Rahm and Rory McIlroy are going to be highly owned so I will fade them and pivot to Patrick Cantlay and Xander Schauffele.

Core Golfers for the Memorial Tournament 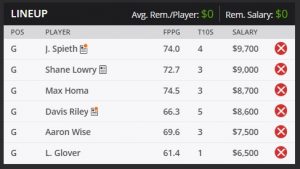 JORDAN SPIETH ($9,700): I will start my Cash Contest lineup with Spieth this week. I wanted to fit Rory McIlroy at the top but I could not find a way to do it. Spieth has been playing well lately and he ranks No. 2 in the key stats this week. Spieth has also made 9 of 10 cuts at the Memorial Tournament. He should have a good chance for a top-five finish Sunday.

SHANE LOWERY ($9,000): Lowery is a safe golfer with a lot of upside this week. He finished 6th at the Memorial Tournament last year and his form is even better in 2022. Lowery ranks 4th in Shots Gained Approach and 7th overall in the key stats. He hasn’t missed a cut in 2022 so Lowery is a lock for Cash Contests.

MAX HOMA ($8,700): I really like Homa this week. He tied Shane Lowery at the Memorial last year with a 6th-place finish so his course history is good. Homa has made 8 cuts in a row on tour and has not missed a cut since January. He also ranks 6th in Shots Gained Tee-to-Green, 5th in Shots Gained Approach, 8th in Shots Gained Putting and 3rd overall in the key stats. I will follow the numbers and play Homa in Ohio.

DAVIS RILEY ($8,600): Who is playing the best golf on the PGA Tour right now? It would be hard to argue with you if you said Riley. He has finished 4th, 13th, 9th and 5th over the last month. Riley also ranks 5th in Shots Gained Tee-to-Green, 7th in Shots Gained Approach, 4th in Shots Gained Putting and No. 1 overall in the key stats this week. I will play Riley and hope the hot streaks continues at the Memorial Tournament.

LUCAS GLOVER ($6,500): I typically do not have a “punt play” in my Cash Contest lineup but Glover is just too cheap to pass up this week. Glover has made 8 cuts in a row at the Memorial Tournament and he has made 11 of 12 cuts in his career at “Jack’s Place.” He is truly a “horse for the course.” His recent form is not too bad either. Glover finished 40th last week and 23rd in the PGA Championship three weeks ago. All I need Glover to do is make the cut. He should be able to do that. 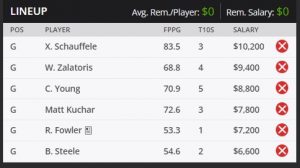 XANDER SCHAUFFELE ($10,200): Schauffele is my pick to win this week. It feels kind of weird picking Schuafflele to be the golfer holding the trophy Sunday because he never wins, but all of the course history, recent form and key stats suggest he is the best play in the field. I will trust the numbers and use Schauffele as a pivot from Jon Rahm and Rory McIlory.

WILL ZALATORIS ($9,400): Zalatoris burned a lot of people last week with his missed cut a the Charles Schwab but you had to figure his head was still messed up after losing the PGA Championship in a playoff. I will go back to Zalatoris this week and hope his ownership is down a bit. His tee-to-green is outstanding. I just need him to putt this week.

CAMERON YOUNG ($8,800): Young has been the chalk in recent events because he has been one of the best golfers on the planet over the last month. He finished 3rd (PGA Championship), 2nd (Wells Fargo) and 3rd (RBC Heritage) in his last three tournaments. His ownership should be down a bit this week since there are so many good options priced around Young. He ranks 4th in my key stats this week so I will give Young a shot in my Tournament Contest lineup.

MATT KUCHAR ($7,800): I have been riding the Kucher hot streak this spring and so far he has not let me down. Kuchar has made 6 cuts in a row on tour and now he gets to play at one of his favorite courses. Kuchar won the Memorial Tournament 2013 and he has made the cut in 7 of his last 8 times he played this event. Kuchar ranks 13th in the key stats this week. He is a great value pick for both Cash and Tournament Contests.

RICKIE FOWLER ($7,200): It has been a long, long time since I wrote the name Rickie Fowler in one of my articles but I am ready to give the Orange Puma a chance this week. Fowler has now made three cuts in a row. Muirfield Village is one of his best courses. Fowler finished 11th MC, 14th, 8th and 2nd over the last five years at the Memorial Tournament. I doubt Fowler will have much ownership so I will play him this week.

BRENDAN STEELE ($6,600): Steele is one of the best “punt plays” this week. If you like course history, Steele has it. He made 6 cuts in a row at the Memorial Tournament. If you like recent form, Steele has that too. He has made 5 cuts in a row on the PGA Tour. Are you into stats? Steele ranks 18th overall in the key stats this week. Those are pretty good numbers for a golfer priced at $6,600. 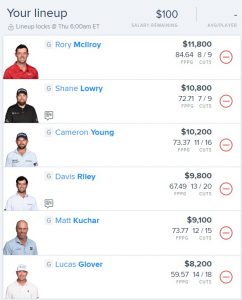 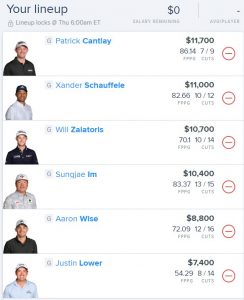 * Justin Lower is from Ohio and he is a member at Muirfield Village. He said he has played this course over 100 times, so he should have some good course history. For $7,400 I just need Lower to make the cut.

* This is the last tournament in Segment 3. There is no reason to save allocations this week. You will get all of your allocation back next week for the RBC Canadian Open. So simply select the best team you car for the Memorial Tournament.

* I used Jon Rahm at Torrey Pines. I would use Rahm this week if he is available for you.