The PGA Tour will travel to Tulsa, Oklahoma this week for the second major of the season. Of course the field is stacked this week with the top-100 golfers in the world. That will give us a lot of options for our DFS contests, but the story of this major surrounds Tiger Woods and Phil Mickelson. Can Tiger win another major? And what the hell is going on with the defending champion (Mickelson) and the Saudi Tour? You will hear a lot about these two golfers this week, but the true story is the young golfers tearing up the tour this year.

The course will play 7,556 yards in length. That is pretty long for a par-70 course. Distance off-the-tee will be important this week, but I will focus on the golfers who are accurate with their approach shots (Hello Shane Lowery and Victor Hovland).

The course has a lot of dog-legs and many of the golfers have compared it to Colonial Country Club (home of the Charles Schwab Championship next week). I will definitely be looking at the golfers who have played well at Colonial CC for my picks (Hello Jason Kokrak, 3rd at Colonia in 2020 and won last year).

Southern Hills should be a good test of the golfer’s game. I doubt we see any ridiculously low scores, but it should be a great tournament for DFS contests.

Key Stats for the PGA Championship

We can find some good value in the field when we look at the key stats. If this major tournament turns into a putting contest, you have to love Troy Merritt for $6,400 on DK. He ranks No. 1 in putting and No. 2 in scrambling. If distance and accuracy off the tee is the winning combination this week, you have to love Cameron Young for $7,600. He ranks No. 1 in the field in Shots Gained Tee-to-Green. It is also interesting to see how Collin Morikawa and Jordan Spieth are two of the best golfers in the field from tee-to-green but they are two of the worst at putting. Sometimes it is best to simply trust the numbers so here are the key stats for the PGA Championship…. 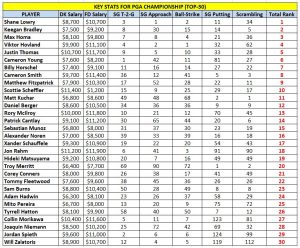 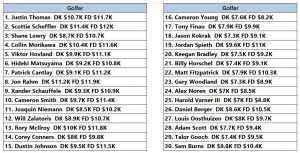 My strategy in Cash Contests is pretty easy this week. Build a “balanced lineup” with as many golfers from the low-$9K and $8K range as possible. The golfers from these price ranges are some of the best golfers in the world and each will have a good chance to win Sunday.

The popular strategy for Tournament Contests will be to build “stars and scrubs” lineups. There is tremendous value in the $6k range this week that will allow us to select two or three of the golfers priced over $9.5K for our lineups. Hit the right combination of “stars and scrubs” could be the winning formula Sunday.

Building a “balanced lineup” in Tournament Contests will be the more contrarian way to select your golfers this week. Everyone is going to want the top golfers in their lineup and it will be easy to fit two or three of them into one lineup. Building a “balanced lineup” with Shane Lowery, Will Zalatoris, Joaquin Niemann, Matthew Fitzpatrick, Corey Conners and Tony Finau may be too good to pass up. 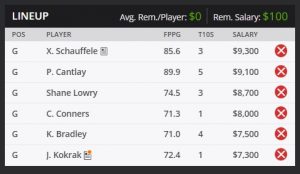 HIDEKI MATSUYAMA ($9,200): Matsuyama is a the perfect golfer for Cash Contest lineups when he is healthy. He posted a 3rd-place finish last week so Matsuyama looks like he has his old form back. The courses are tough in the major tournaments and Matsuyama doesn’t make mistakes. He should have a good chance for a top-10 finish Sunday.

* Hideki Matsuyama posted on Twitter that his neck is hurting and he will “try to give it a go Thursday”. That does not sound good so I will pivot to Xander Schauffele.

PATRICK CANTLAY ($9,100): It wasn’t long ago that Cantlay was the best golfer in the world and he won the Tour Championship. Cantlay went into a slump a few months ago while he worked on his game. He is back now. Cantlay and Xander Schauffele won the WGC Match Play and he finished 2nd his last time out at the RBC Heritage. Cantlay is a great value for $9,100 this week.

SHANE LOWERY ($8,700): I thought about ranking Lowery No. 1 in my Golfer Rankings but I will wait until The Open Championship before I put the Irishman at the top of the rankings. The stats suggest Lowery should be the best pick in the field. He ranks No. 1 in the key stats this week. Some golfers said in their interviews, “This will be a second-shot event this week.” Lowery ranks No. 1 in Shots Gained Approach. I like Lowery for all types of contests this week.

COREY CONNERS ($8,000):  Conners does not get enough respect by the DFS sites and that makes the Canadian one of the best value picks in the field this week. One of the reasons I really like Conners this week is because he is accurate off the tee and hit is 10th on tour in Greens in Regulations. As long as he keeps his ball in the fairway and hits the greens, he should be a great Cash Contest play this week.

KEEGAN BRADLEY ($7,500): Bradley in Cash Contests seems crazy. It seems absolutely absurd in a major tournament, but here we are. Bradley is in the best form of his career. He has finished top-11 in 4 of his last 5 tournaments. He also ranks No. 2 in the key stats this week. Yes, I was shocked to see Bradley at the top of the list too. He should make the cut and finish in the top-25 Sunday with top-10 upside.

JASON KOKRAK ($7,300): The more research I did for this tournament, the more I liked Kokrak. When I looked at the comparable courses to Southern Hills C.C., Kokrak ranked No.1 in the field at those courses. His form is good since he has not missed a cut since March. It was his only missed cut since October. Kokrak will be a good play in Cash and Tournament Contests this week. 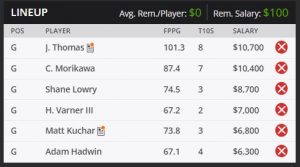 JUSTIN THOMAS ($10,700): The PGA Championship should be a battle between Scottie Scheffler and Thomas this week. These two golfers are in excellent form and they proved they can win a major tournament. I picked Thomas to win because he has no flaws right now and Southern Hills C.C. sets up perfectly for his game. I expect Sheffler to be slightly higher owned than Thomas so I will pivot and take the lower owned golfer.

COLLIN MORIKAWA ($10,400): The golfer who ranks No. 1 in the world on tough courses is Morikawa. He is built to win majors. He won the PGA Championship in San Francisco in 2020 and he finished 8th last year. His ball-striking is off the charts, so Morikawa should be in contention to win another major Sunday.

SHANE LOWERY ($8,700): I usually do not like to use the same golfers in the Cash and Tournament Contest because I want to write up as many golfers as possible, but I cannot fade Lowery right now. He ranks No. 1 in Shots Gained Approach and No. 3 in Shots Gained Off-the-Tee and No. 11 in Shots Gained Putting. If he has the same form he has had all year, Lowery should finish in the top-five Sunday.

HAROLD VARNER III ($7,000): How many times have you turned the TV on to watch a major tournament on the PGA Tour and saw HV3 at the top of the leaderboard? It seems like it happens a lot. Varner finished 6th at THE PLAYERS and 23rd at The Masters. He has also made the cut in ever PGA Championship since 2016. HV3 finished 3rd his last time out at the RBC Heritage. I would not be surprised to see HV3 as the first round leader Thursday.

MATT KUCHAR ($6,800): Kuchar seems to have found the fountain of youth. Kuchar finished 12th, 49th, 3rd, 2nd and 16th in his last 5 tournaments. Not bad for $6,800. Kuchar also sticks out like a sore thumb in the key stats. Kuchar ranks No. 1 in the field in Scrambling and No. 2 in Shots Gained Putting. He also ranks No. 11 overall in the key stats. I will trust the numbers and take a chance with KOOOOOOCH this week.

ADAM HADWIN ($6,300): I had to look again at the DraftKings prices when I saw Hadwin was $6,300 this week. I realize he missed the cut last week, but how motivated was Hadwin for the AT&T Byron Nelson? Hadwin made 4 consecutive cuts before last week’s tournament. That includes 3 finishes in the top-10. Hadwin ranks 24th in the key stats. That is great value for one of the cheapest golfers in the field.

* If you want a lower owned golfer who could score well this week, pivot from Adam Hadwin and use Troy Merritt. He ranks No. 1 in the field in Shots Gained Putting and No. 2 in Scrambling. Pairing him with Matt Kuchar will give you the top-two golfers in putting and scrambling in your lineup. I went with Hadwin because he is the safer pick. 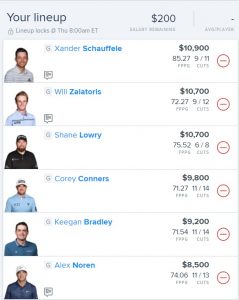 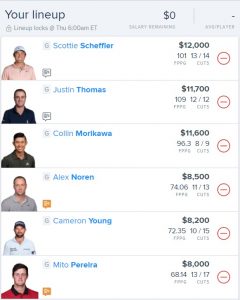 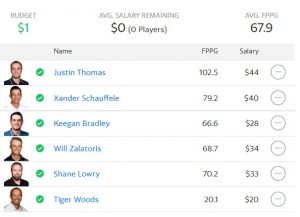 * This is the ninth of 11 tournaments in Segment 3. There is no reason to save allocations this week. The best golfers in the world are playing the PGA Championship so simply field the best team you can. Many of the golfers playing this week will skip the tournament next week.