The PGA Tour will travel to Hilton Head, South Carolina this week for the RBC Heritage. You would think that most of the top players in the world would take the week off following the Masters, but that is not the case. This tournament always brings in a strong field because RBC sponsors a lot of the top players, but this week the tournament is even more stacked than normal. The field includes: Cam Smith, Dustin Johnson, Justin Thomas, Collin Morikawa, Patrick Cantlay, Tyrrell Hatton, Shane Lowry, Daniel Berger, Jordan Spieth, Matthew Fitzpatrick, Sungjae Im, Corey Conners, Tommy Fleetwood, Joaquin Niemann and Webb Simpson. It should be another fun week to play DFS golf.

The course this week is short for the tour professionals. It is 7,100-yards; par 71, with only three par 5’s which are reachable in two shots for every golfer in the field. What make this course difficult are the trees which line the fairways and the smallest greens on tour. The golfers will have to be accurate off the tee to setup easier approaches to the pins. Accuracy, Accuracy, Accuracy with the irons is what we are looking for this week.

Iron play will be important this week. Most golfers will use irons off the tees and need to have a good wedge game since their second shot is likely to be under 160 yards. Accuracy is the name of the game in this tournament.

Key Stats for the RBC Heritage 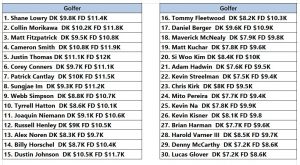 This tournament is going to come down to which golfers can hit fairways off the tee and greens in regulation. The golfers who rank highly in these categories always finish at the top of the leaderboard. This is not a bombers course. Most golfers will club down off the tee and they need to be accurate with their approaches into the greens because there is a lot of trouble if they miss.

Lineup construction for Cash Contests needs to be built around golfers from the mid-$9K to mid-$7K ranges this week. A balanced lineup should score well and I will be using it in some Tournament Contests as well (I should have used the Cash Contest lineup in the Millionaire Maker Contest at the Masters)

I need to write about Cameron Smith before I get into the lineups. We all knew Scottie Scheffeler was the best golfer in the world heading into the Masters, yet everyone (including me) faded him. The same may be true this week with Smith. He is playing the best golf right now out of the entries in the field. I have read a lot of the “experts” articles and I have yet to find anyone trying to convince people to play Smith. Sign me up for a few shares of Smith if he is going to have low ownership this week. I will eat the chalk with Collin Morikawa in Tournament Contests because he is almost a lock for a top-five finish. 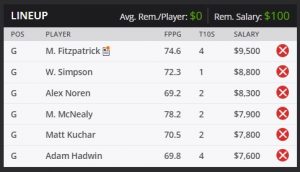 MATTHEW FITZPATRICK ($9,500): The top of my Cash Contest lineup came down to Shane Lowry, Corey Conners or Fitzpatrick. I could not afford Lowry with the other golfers I like and I am worried about fatigue with Conners since he has played so much golf over the last month. Fitzpatrick told Jason Sabel of the Golf Channel that Harbour Town is his favorite course. He finished 4th in this tournament last year and his form is better this year. Fitzpatrick should have a good chance to win or finish in the top-five Sunday.

WEBB SIMPSON ($8,800): Simpson is a lock for my Cash Contest lineups this week. He is so good in this tournament that they should name it “The Webb Simpson Invitational.” He has made 11 consecutive cuts at Harbour Town and that includes finishes of 9th, 1st, 16th, 5th and 11th over the last five years. Simpson is almost a lock for a top-15 finish Sunday.

ALEX NOREN ($8,300): I debated between Si Woo Kim and Noren for this pick. Kim is a Pete Dye Course Specialist so he should play well. I went with Noren because he has never missed a cut at Harbour Town and he finished 18th, 12th, 26th and 5th over the last four years in this tournament. I expect Noren to be near the top of the leaderboard this week.

MAVERICK MCNEALY ($7,900): This pick was a choice between Chris Kirk and McNealy. Both have tremendous course history. Kirk finished 7th last year and McNealy finished 4th. McNealy has better form since he has not missed a cut all season. Kirk has more upside so I will play him in Tournament contests and use McNealy in Cash contests since he is the safer golfer.

MATT KUCHAR ($7,800): I cannot believe I am playing Kuchar in Cash Contests but he has looked pretty good lately and he has great course history at Harbour Town. Kuchar enters the RBC Heritage after a second-place finish at the Valero Texas Open. He has also made 13 cuts in a row at the RBC Heritage. That includes a win in 2014, a 2nd place finish in 2019 and an 18th place finish last year. Kuchar should feel right at home at this short course.

ADAM HADWIN ($7,600): Hadwin is in great form. He finished 4th, 7th and 9th in his last three tournaments and he ranks 18th in the key stats. His course history is not great but it is not terrible. Hadwin has made four of his six cuts at Harbour Town. He has never been in this good of form entering the tournament though. Hadwin should have a good chance for a top-20 finish this week. That is about all we need from him in Cash Contests. 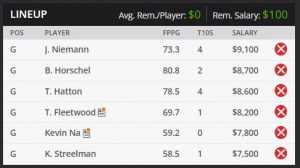 JOAQUIN NIEMANN ($9,100): I like the higher priced golfers but when I looked at the winning lineups from the previous RBC Heritages tournaments, most of the lineups hammered the low $9K and $8K price ranges. That is what I am doing this week. Niemann has good course history, he is in good form, ranks high in the key stats and his ownership should be low. Niemann finished 5th at Harbour Town in 2020. He has made four of his last five cuts, including a win at the Geneisis. He ranks 5th in the key stats so I will take a shot with Niemann and hope he can win Sunday.

BILLY HORSCHEL ($8,700): I watched Billy-Ho on ESPN+ last week and I never seen a golfer like him before. Terrell Hatton was doffing it all over the course and Horschel was cheering him on like it was his golf ball. Anyways… Horschel is in good form, has good course history and he pops in the key stats. Horschel ranks 9th in Shots Gain Approach, 8th in Bermuda Green Putting, 3rd in Greens in Regulation and 3rd overall in the key stats. I will trust the numbers and play Horschel this week. I doubt his ownership will be crazy high.

TERRELL HATTON ($8,600): As fun as it was to watch Billy Horschel play cheerleader last week, it was tough watching Hatton have a meltdown. I am not worried about Hatton. He said he hates playing at Augusta National. He loves playing at Harbour Town though. He finished 3rd in this tournament in 2020. Hatton was playing good golf before the Masters. I expect people will avoid him like the plaque this week. For that reason, I will play Hatton because of the upside he offers.

TOMMY FLEETWOOD ($8,200):  I played Fleetwood last week and he was 8.6% owned. He scored 64.5 DK Points and finished 14th. I expect the same type of ownership for Fleetwood and the same type of results in the tournament. Fleetwood is in good form. He has made his last four cuts and all of the finishes have been in the top-22. Fleetwood ranks 16th in the key stats. I will take a chance with Fleetwood at Harbour Town.

KEVIN NA ($7,800):  This pick is more of a gut feeling than anything else. Na has a history of popping up in the top-10 and then all of a sudden he wins a tournament. That is what happened when he won the Sony Open (That course is very similar to Harbour Town). Na ranks 11th in Driving Accuracy and 12th in Greens in Regulation. I was surprised to see he ranks 5th in Birdies made over his last 16 rounds. I doubt Na will be my pivot from Maverick McNealy and Matt Kuchar, who should both have higher ownership.

KEVIN STREELMAN ($7,500): The RBC Heritage is a good tournament for Streelman. He has made 8 of his last 9 cuts at Harbour Town. That includes a 6th-place finish in 2019 and a 7th-place finish in 2018. His form is good too since Streelman finished 18th, 7th and 22nd in his last three tournaments. Streelman ranks No. 2 in the tournament in Driving Accuracy. That is huge this week. He also ranks 11th overall in the key stats. I will not be surprised to see Streelman pop up at the top of the leaderboard this week. 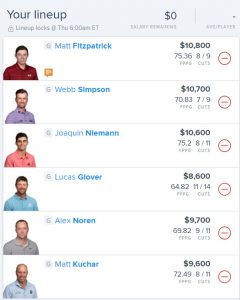 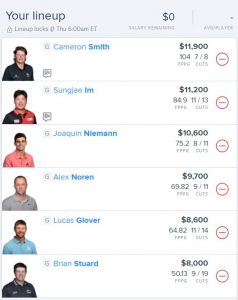 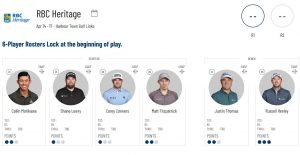 * This is the fifth tournament of Segment 3. We still have the PGA Championship and the Memorial Tournament in this section. You need to save at least one allocation with Cam Smith, Collin Morikawa and Justin Thomas for the PGA Championship, but the rest of the field is in play this week.

* All of the stats and my notes suggest Webb Simpson is the play for the RBC Heritage. His stats at this tournament are outstanding, but do we trust his form? For me it came down to Shane Lowry or Matthew Fitzpatrick. I want to save Lowry for The Open Championship so I will use Fitzpatrick this week.