The 2022 PGA Tour teed off two weeks ago with the Fortinet Championship. Max Homa was the first golfer to get a win in the 2022 – 2023 season. Now we get to see who will be the next golfer to win a trophy is when the PGA Tour travels to Jackson, Mississippi for the Sanderson Farms Championship.

Following the Presidents Cup on the schedule is not a good place to be. Most of the top golfers will be taking some rest this week so we get a pretty crappy field in the Sanderson Farms Championship. This is a tournament when many golfers got their first win. The list of golfers who won for their first tournament on the PGA Tour includes: Cameron Champ (2018), Ryan Armour (2017), Cody Gribble (2016), Peter Malnati (2015), Nick Taylor (2014) and Chris Kirk (2011). There is a good chance we will get another first time winner this week.

The Country Club of Jackson will be the course this week. The Sanderson Farms Championship has been played at this course every year since 2014. Many of the golfers should be familiar with the layout.

The Country Club of Jackson is a 7,461 yard par 72. It is a pretty long course, but there are also some shorter holes which will allow the “bunters” to score too. The fairways are normal width and the rough is not too tough. This typically turns into a birdie fest and the golfers who put well are typically at the top of the leaderboard.

Three of the last five golfers who have won this tournament were from Texas. Golfers from the Lone-Star State are usually good on Bermuda greens and that is what we have this week (Last year’s winner was Sam Burns and he is from Shreveport, LA. So he is also from the area).

Click here to see the course: Country Club of Jackson 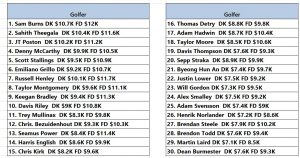 The field for the Sanderson Farms Championship is made up of mid-tier golfers who would not have a chance if the top golfers were playing this week. We also have a lot of new players on the PGA Tour who do not have a lot of experience. This tournament is wide open, so there are a lot of options for our DFS lineups.

Stars and scrubs will be my preferred lineup build for my tournament contests. Is there really a big difference between the golfers in the $7K price range and the $6K range this week? I don’t think so. They are all scrubs and all have some risk. So why no load your lineup with the more reliable golfers at the top of the price-range and take a shot with a few of the golfers from the $6K range? That will be my strategy this week.

I will be playing more Tournament Contests then Cash Contests this week. The goal to building a winning Cash Contest lineup is to find 6 golfers who have little risks and are assured to make the cut. It is hard to fit 6 of these golfers this week because they are all priced at $9K or up. We will have to take some chances with some lower priced golfers in our Cash Contest lineup and that makes it tougher to win. So I will play a few Cash Contest lineups, but my strategy will be to multi-enter many Tournament Contests with different combinations of the golfers priced at $9.9K and above and from the lower $7K and $6K ranges. 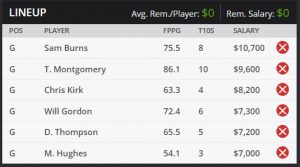 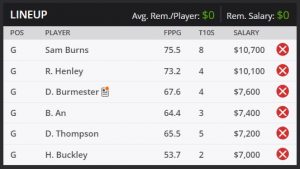 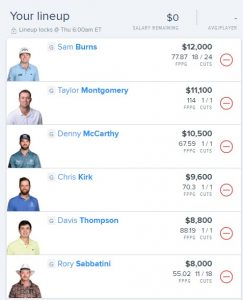 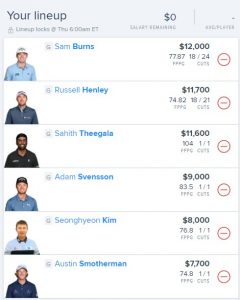 * This is the 2nd tournament of Segment 1. There are 8 tournaments in this segment and most of the top golfers will sit out many of the events. You should not need to save allocations in segment one. Simply play the best golfers available.

Players Used This Season in One & Done: Brendon Steele (CUT)