The PGA Tour stays in Texas this week for the Valero Texas Open at TPC San Antonio. This is the last warm up for the golfers before they compete at the Masters next week.

TPC San Antonio is long (7,400 yards) with lots a large Oak trees. The golfers will have to be accurate off the tee this week or they will have trouble getting their shots out of the trees. This is one of the toughest non-major courses on the circuit. The par 5s are very long and it will be difficult for many of the golfers to reach in two shots. The course ranks 6th lowest in allowing birdies and eagles so your golfers will likely not score many points in DraftKings.

If you want to know how to find good golfers for this tournament, simply look at the results from Torrey Pines. Both courses are ridiculously long with tight fairways and a lot of wind. When we look at the past top-10 finishers at the Valero Texas Open, they all have one thing in common… they all played well at Torrey Pines. 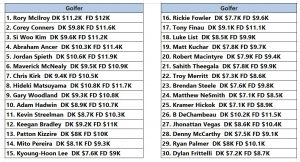 My Core Golfers will be made up of golfers in good form, have good course history and need to earn a spot for the Masters. These golfers have a lot to play for. 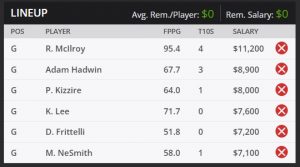 RORY MCILROY ($11,200):  I had no idea why McIlroy was playing this week and then I heard him talk on the Golf Channel. He said he dedicated to winning the Masters and he thinks TPC San Antonio is a good course to get ready for Augusta National. He gave up a guaranteed pay day in the WGC Match Play to get ready for this tournament. McIlroy is the best golfer in the field. He could do enough to win the Cash Contest alone, if he shows up in his best form.

ADAM HADWIN ($8,900):  Hadwin is in excellent form and he needs to play well this week to earn a spot in the Masters. Hadwin finished ninth at THE PLAYERS three weeks ago and he finished seventh two weeks ago at the Valspar Championship. He made the cut in his last two trips to TPC San Antonio and Hadwin ranks fourth in the key stats. He should be a safe play for your Cash Contests this week.

PATTON KIZZIRE ($8,000):  There are a lot of reasons to like Kizzire this week. He enters the tournament after making every cut since January. He also has good course history since Kizzire finished ninth at the Valero Texas Open last year. He ranks 15th in the key stats so his game sets up well for Kizzire to finish in the top-25 this week.

KYOUNG-HOON LEE ($7,600):  I played K-H Lee a lot early in the season and I am going back to him this week. Lee has made every cut since last September. He has played this tournament twice. He finished 14th in 2020 and 23rd last year. Lee needs to play well to earn a spot in the Masters. He should have a good chance to finish in the top-20 this week.

DYLON FRITTELLI ($7,200): Frittelli is the riskiest player I have in my Cash Contest lineup, but this is a gut play. Frittelli seems to play well when his back is against the wall. Well, he does not have a spot in the Masters, so I think the good Frittelli will show up this week. He has made every cut since early February and Frittelli made both of his cuts at the Valero Texas Open. He ranks seventh in my key stats so his game sets up well for Frittelli to make the cut and be a good play for both Cash and Tournament Contests.

MATTHEW NESMITH ($7,100): The last choice for my Cash Contest lineup came down to Aniban Lahari and NeSmith. Both have good recent form, have made a lot of cuts in a row and need to play well to earn a spot in the Masters. I went with NeSmith because he ranks 26th in the key stats and Lahari ranks 53rd. There are no holes in NeSmith’s game. Lahari is good off the tee and good at putting, but his approach game ranks 123rd out of the 144 golfers. I will play NeSmith for Cash Contests and save Lahari for the Tournaments. 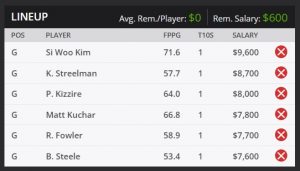 SI WOO KIM ($9,600): There are a lot of reasons to start your lineup with Kim this week. He enters the tournament in good form. Kim has made nine of his last 10 cuts. He also made four straight cuts at the Valero Texas Open. Kim needs to win this week to get into the Masters. He should be lazar focused to play well this week.

KEVIN STREELMAN ($8,700):  It has been a long time since I have played Streelman but he checks all of the boxes this week. Streelman is starting to heat up. He finished 22nd three ago at THE PLAYERS and seventh two weeks at the Valspar Championship. Streelman also made eight cuts in a row at TPC San Antonio. That includes top-10 finishes in his last two trips. Streelman needs to play well this week to earn a spot in the Masters. I think he can do it.

PATTON KIZZIRE ($8,000):  Kizzire will be in my Cash and Tournament Contest lineups this week. He checks all of the boxes and he ranks 15th in my key stats. I do not play Kizzire often, but this is his best course so I will use him this week.

MATT KUCHAR ($7,800):  It is hard to believe Kuchar does not have a spot in the Masters. He has been so good, for so long that you would have thought he had an exemption to play next week, but that is not the case. Kuchar finished 16th two weeks ago at the Valspar Championship. He desperately wants to play next week at the Masters. Kuchar has made 12 cuts in a row at the Valero Texas Open, so he should be ready to score well this week.

RICKIE FOWLER ($7,700):  It is no secret that Fowler has a goal of making it to the Masters. He told reports before the Waste Management Open, “I need to start playing well because I do not have a spot in the Masters. That is the one tournament I do not want to miss.” Fowler hasn’t been great this year, but he has made three cuts in a row. Fowler also finished 17th in his last two trips to TPC San Antonio. Maybe this is the week when the old Fowler shows up.

BRENDAN STEELE ($7,600):  Steele is usually all of nothing for your DFS lineup. He should be good this week. Steele enters the tournament after making two cuts in a row. That includes a 13th-place finish at THE PLAYERS. He has also made 11 of his last 12 cuts at the Valero Texas Open. That includes a win in 2011. Steele does not have a spot in the Masters so he should be ready to play well this week. 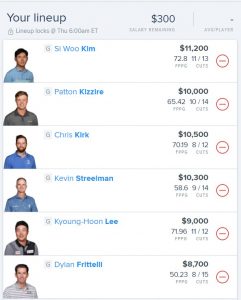 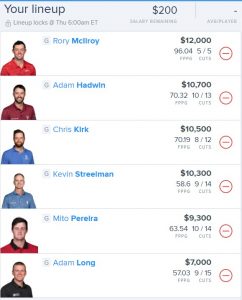 * This is the third tournament of Segment 3. We still have the Masters, PGA Championship and the Memorial Tournament in this section. I think you can get through those tournaments with the players not entered this week, so fill free to use the best golfers for your lineup at the Valero Texas Open. No need to save allocations.