The PGA Tour travels to Scottsdale, Arizona this week for the Waste Management Phoenix Open (WMPO), also known as “The Greatest Show on Grass”. This is truly a fans tournament. The galleries at TPC Scottsdale are unlike any other tournament. Cheering, booing, singing and yes… a lot of drinking. They always have this tournament on Super Bowl weekend and it is no different this year. The PGA Tour moved it a week later on the schedule and it should once again be a good appetitive for the Super Bowl Sunday.

The field last week at Pebble Beach was trash. That will not be the case in the WMPO. 18 of the top 30 golfers in the world will be teeing it up this week. The list of the top golfers includes: John Rahm, Justin Thomas, Patrick Cantlay, Victor Hovland, Jordan Spieth, Sam Burns, Tony Finau, Hideki Matsuyama, Brooks Koepka,Xander Schauffele and  Louis Oosthuizen. There will be a lot of good choices to build DFS lineups from this week.

TPC Scottsdale is a par 71 which plays 7,300 yards in length. It is a long course with a lot of bunkers just off the fairways. The greens are Bermuda grass that is heavily over seeded to make them nice and green. The problem is the hot desert sun makes the greens very hard. It is more important to be accurate then long off the tee. The 17th hole is a short par 4 which the bombers can reach the green in one shot. The best way to score at TPC Scottsdale is to eagle the easy par 5’s. This tends to lead to some low scoring. The golfers who lead the tournament in Ball-Striking always finish at the top of the leaderboard at TPC Scottsdale. I will be targeting the golfers who are accurate with their irons this week. 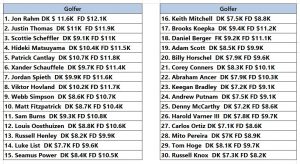 Finally we have a tournament played on one course with a cut after 36 holes. That was not the case for the tournaments in California. The WMPO is usually one of the easier tournaments to predict because course history means so much at TPC Scottsdale. The same golfers typically pop up at the top of the leaderboard every year. I will be targeting these golfers this week, but I will take a shot with some of the young golfers without course history, who are playing well right now. They should have low ownership.

The Cash Contest picks continue to roll. I only had 4 of the 6 golfers play all four rounds but I hit on Patrick Cantlay (wasn’t hard to predict) and Troy Merritt. These two golfers scored over 100 DK Points and allowed the Cash Contest lineup to reach the pay-line in four of the five tournaments in 2022. I will use the same strategy this week that has brought me success this year… I will use the golfers who are in good form and have good course history.

My tournament strategy is to play a lot of “stars and scrubs” lineups. The golfers priced over $9.6K are elite golfers who could score over 100 DK Points this week. I want as many shares of them as possible. So I will use a lot of the golfers at the top of the price range and pair them with golfers from the low $7K and upper $6K rangers. Having a golfer like Adam Hadwin (6 straight cuts made at WMPO), Doug Ghim (ranks No. 4 in Ball-Striking) or Wyndham Clark (7 straight cuts made on tour) are not a bad golfers to pair with three of the studs up top. 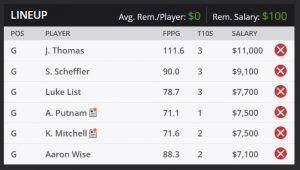 * Jon Rahm is the best pick for Cash Contests but I could not figure a way to fit him into the Cash Contest lineup without sacrificing one of my other golfers. The best strategy is to pair Rahm or Justin Thomas with Scottie Scheffler. If you can make a Rahm + Scheffler lineup fit, do it.

Justin Thomas ($11,000): Can Thomas putt this week? If he can, JT will likely win. He finished 3rd (WGC), 5th (Hero World Challenge) and 5th (Sentry T.O.C.) in the tournaments where he gained significant strokes on the field putting. He finished 20th (Farmers) in the tournament when he was only in the middle of the pack in putting. JT finished 3rd, 3rd and 13th in his last three trips to the WMPO. He should be a good pick for a top-five finish Sunday.

Scottie Scheffler ($9,100): I really like Scheffler this week. His form is good (Scheffler has made 7 straight cuts with 3 finishes in the top 5), he ranks 10th in the key stats for this tournament and he finished 7th in the WMPO last year. Scheffler will have a good chance for another top-10 finish this week.

Luke List ($7,700): I tried to squeeze two top golfers and Web Simpson into my Cash Contest lineup but I could not make it work. Instead I will save some salary and drop down to List. He just won the Farmers Insurance Open (another large course played on Bermuda greens) and his form is fantastic. He has three finishes in the top-11 in his last four starts. List ranks second in the key stats…Yes, second!! The only golfer better is Patrick Cantlay. List has made his last two cuts in the WMPO so he has some course history too.

Keith Mitchell ($7,500): Mitchell is one of the golfers I am betting to win this week so why not play him in the Cash Contest lineup too. Mitchell checks all of the boxes this week. His form is good (Mitchell has made 6 of his last 7 cuts, including top-12 finishes in 3 of his last 4 tournaments), he ranks 16th in the key stats (he ranks 5th in Shots Gained Tee-to-Green and 6th in Eagles on Par 5s) and his course history is not too bad (Mitchell finished 16th in the WMPO in 2020). He has the length off the tee to dominate the Par 5 and score well on the long Par 4s.

Aaron Wise ($7,100): I considered Keegan Bradley, Carlos Ortiz, Denny McCarthy, Adam Hadwin and Wise for the final spot in my Cash Contest lineup. All of these golfers have decent recent form and good course history but Wise destroys them in the key stats. Wise ranks 8th overall in the field. He ranks 12th in Shots Gained Tee-to-Green, 15th in Ball-Striking and 17thin Shots Gained Putting (Bermuda). Wise has finished 3 of his 5 tournaments in the top-15 this year. He should be good again this week. 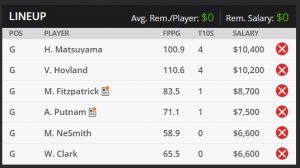 Hideki Matsuyama ($10,400): The 2021 Master Champion continues to roll. He has already added two more wins this year to his resume (ZoZo Championship and Sony Open). Now he gets to play at one of his best courses. Matsuyama has four finishes in his seven starts at the WMPO. He has won this tournament twice and finished second another time. Matsuyama is a good pick to win Sunday.

Victor Hovland ($10,200): Hovland could be overlooked this week because Jon Rahm, Justin Thomas and Jordan Spieth are in good form and have good course history, but that could be a mistake. Hovland is playing the best golf in the world right now. He finished 1st, 4th, 30th, 1st and 1st in his last five tournaments. He also ranks 3rd in the key stats. I will take a chance with Hovland this week.

Webb Simpson ($8,600): Simpson is way underpriced this week. I looked back at last year’s WMPO and Simpson was $9,700. Now we get a $1K discount on him. Simpson hasn’t played much this year but he played good when he did tee it up. Simpson finished two of his last three tournaments in the top-10. Simpson won this tournament in 2020 and finished second in 2017. He knows his way around TPC Scottsdale.

Matthew Fitzpatrick ($8,700): Webb Simpson withdrew from the tournament so I will pivot to Fitzpatrick. He looked good in his last two tournaments and he should be low owned.

Andrew Putnam ($7,500): Putnam is another golfer who is underpriced this week. His form is excellent. Putnam finished 6th last week at Pebble Beach and 14th at the American Express. He ranks 11th in the key stats and his course history is good (Putnam finished 7th in the WMPO last year). Putnam adds another potential top-10 golfer to the tournament contest lineup this week.

Wyndham Clark ($6,600): I just cannot quit Clark. I had him last week and he made the cut on the number (But was eliminated because of the stupid MDF rule). I was watching Clark and he was three shots below the cut entering the back nine. He then turned it on to shoot three under par on the back nine. I am hoping he can carry that momentum into the WMPO. Clark has made seven cuts in a row and two in a row in the WMPO. Not bad for $6,600.

Matthew NeSmith ($6,600): I doubt anyone will be talking about NeSmith this week, but I will take him. NeSmith has made four of his last five cuts so the form is good. His course history is good too (NeSmith finished 7th in the WMPO last year). So his key stats must suck and that is the reason he is so cheap, right? Wrong! NeSmith ranks 19th in the key stats. He could be a tournament winner if he finishes in the top-10 again.

Here are my lineups for Multi-Entry Tournament Contest: (FantasyNASCARTips) 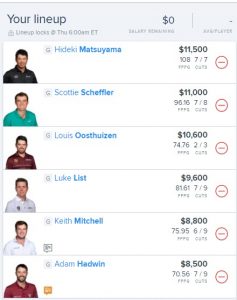 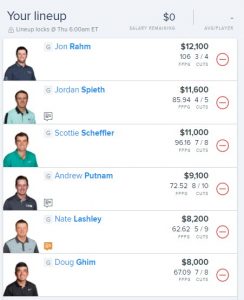 * This is the 6th tournament of Segment 2. There are 10 tournaments in this segment. The top golfers will be playing most of the tournaments leading up to THE PLAYERS in early March. We need to make sure we save some of our top golfers for THE PLAYERS.

My One & Done Pick is: Scottie Scheffeler (Waste Management Open)