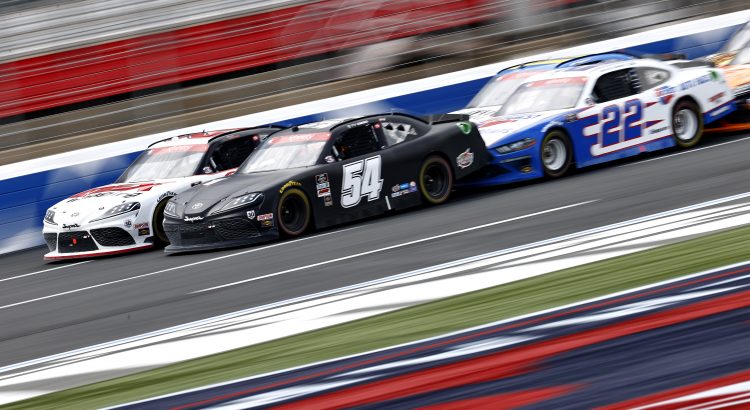 The Xfinity Series will join the Truck and Cup Series at Charlotte Motor Speedway this week. The racing in the Xfinity Series has been a good battle between Joe Gibbs Racing and Junior Motorsports. That probably will not change at Charlotte, but Austin Dillon and Ryan Preece will be looking to crash the party up front. It should be fun to watch. The Alsco Uniforms 300 can be seen Saturday at 1 p.m. ET on FS1. 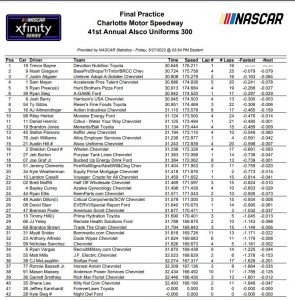 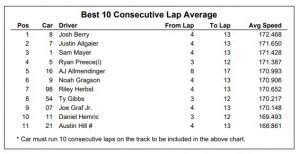 The Xfinity Series has competed at three 1.5-mile tracks this year. I will be focusing my picks on what the drivers did at Las Vegas and Texas, but I will not rule out the data from the race at Auto Club and Atlanta. 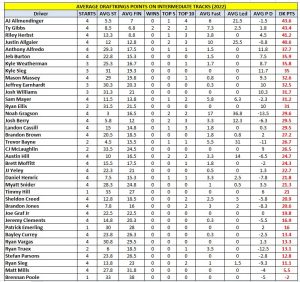 TY GIBBS ($11,000): Gibbs and his No. 54 Joe Gibbs Racing team are always fast. They are at their best on the intermediate tracks. Gibbs won the races at Las Vegas and Atlanta. Now he is “almost” a must start Saturday. Gibbs hit the wall in practice so the team took the car to the garage to fix it. He did not qualify so Gibbs will start in the back. He is almost a lock to score 25+ place differential points. The would be equivalent to leading 100 laps.

NOAH GRAGSON ($10,800): Gragson is going to be one of the top dominators Saturday. His No. 9 Junior Motorsports Chevy has been up front in almost every race this year. The question is… Can Gragson bring the car to the checkered flag in one piece? He has led at least 30 laps in all of the races on intermediate tracks this year. He crashed out of two of the races though. Gragson is worth taking a chance on in Tournament Contests Saturday.

JUSTIN ALLGAIER ($10,600): Just when you thought Noah Gragson was the top driver for Junior Motorsports, Allgaier says, “Not so fast my friends.” Allgaier has been on a hot streak lately. He finished 2nd at Dover, won at Darlington and finished 4th at Texas. He has averaged 58 laps led and has a 2.3 average finishing position in his last three races. Allgaier also has a 6th-place average finishing position in his last three races at Charlotte. He should have a good chance to be one of the dominators Saturday.

AJ ALLMENDINGER ($10,400): Do you want the safest driver in the field in your lineup this week? There may have never been a safer driver in the Xfinity Series as Allmendinger. He has finished every race this year in the top-10. He has not led many laps or been one of the top dominators, but he will get you 40 DFS Points. I like Allmendinger a lot more for Cash contests than I do for Tournaments.

AUSTIN DILLON ($10,100): Dillon will be behind the wheel of the No. 48 car for Big Machine Racing. This is the same team that Tyler Reddick took to Victory Lane last week. Can Dillon do the same? He competed in five Xfinity Series races last year and his average finishing position was 19.2. Not too good. Those races were in some underfunded cars (Ronnie Bassett Racing and Jordan Anderson Racing). He did finish 11th at Atlanta in a Junior Motorsports Chevy and 6th at Indianapolis in an Our Motorsports Chevy. I do not expect Dillon to have the same success as Reddick but he should compete for a top-10 Saturday.

TREVOR BAYNE ($9,800): Bayne will be back behind the wheel of the No. 18 car for Joe Gibbs Racing. He has driven this car in three races this year. He started 4th, led 24 laps and finished 3rd at Auto Club. He won the pole, led 38 laps and finished 4th at Phoenix and Bayne started 5th, led 38 laps and crashed out of the race at Atlanta. He is going to be fast again Saturday and he has the talent to be one of the top dominators. I will have some share of Bayne this week.

JOSH BERRY ($9,600): Berry will be a good pivot from the more popular drivers in the field this week (Noah Gragson, Justin Allgaier, Trevor Bayne and Ty Gibbs). He has been just as good as those drivers on the intermediate tracks this season. Berry finished 4th at Auto Club, 4th at Las Vegas, won at Dover and he led 46 laps and finished 7th last week at Texas. I will have a lot of shares of Berry this week.

RYAN PREECE ($9,300): Preece will be behind the wheel of the No. 5 car for B.J. McLeod Motorsports. Usually when he races, the car has some support from Stewart Haas Racing. I expect that to be the case this week. Preece drove this car ar Richmond earlier this year. He started 6th and finished 16th. Preece will not have the speed to win but he should be good for a top-15 finish.

SAM MAYER ($9,100): I created a more balanced lineup last week where I paired Mayer with Josh Berry, Tyler Reddick, Riley Herbst and Jebb Burton and I took down one of the Tournament Contests. I will be using the same strategy this week (But replacing Reddick with Austin Dillon). Mayer is on a hot streak. He finished 5th at Dover, 5th at Darlington and 3rd at Texas. There is a good chance his top-five streak will continue at Charlotte.

RILEY HERBST ($8,500): I did not use Herbst much this year because he crashed too many cars early in the season. Not playing him has been a mistake. Herbst has been just as consistent as AJ Allmendinger over the last two months. Herbst finished 4th, 5th, 6th, 7th, 9th, 3th and 8th in his last seven races. He finished his two races at Charlotte in 12th place. Herbst hit the wall in qualifying so he will start in the back. Just lock Ty Gibbs and Herbst into your Cash Contest lineups Saturday.

AUSTIN HILL ($8,300): I expected Sheldon Creed to be the top driver at Richard Childress Racing this year but it has been Hill who has consistently ran up front. Hill led 27 laps and finished 2nd at Atlanta. He started 3rd, led 16 laps and finished 5th at Texas. His No. 21 car for RCR should be fast again this week. He is a good contrarian pick to score some dominator points Saturday.

ANTHONY ALFREDO ($7,600): I have been playing “Fast Pasta” a lot this year and the race last week was the first time he has let me down. His wreck was not his fault though so I will not hold it against him. Alfredo finished 5th at Auto Club, 17th at Las Vegas and 16th at Altanta. He should finish somewhere near the 15th spot again Saturday.

JEBB BURTON ($7,300): The good thing about Burton is that we know exactly what we are going to get when we select him for our DraftKings lineup. Burton has finished almost every race this year in the teens. It is usually somewhere between 12th and 17th place. Burton is a safe pick for both Cash and Tournament lineups this week.

BAYLEY CURREY ($5,600): Currey has been the best bargain pick in DraftKings contests this year. He is not going to finish in the top-10 and win you your contest, but he should score a few place differential points and help you team win this week. I will play Currey again this week and hope to get 20+ DK Points from him. 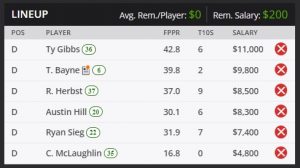 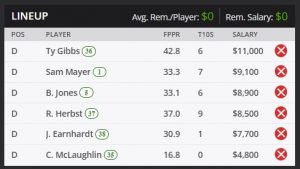