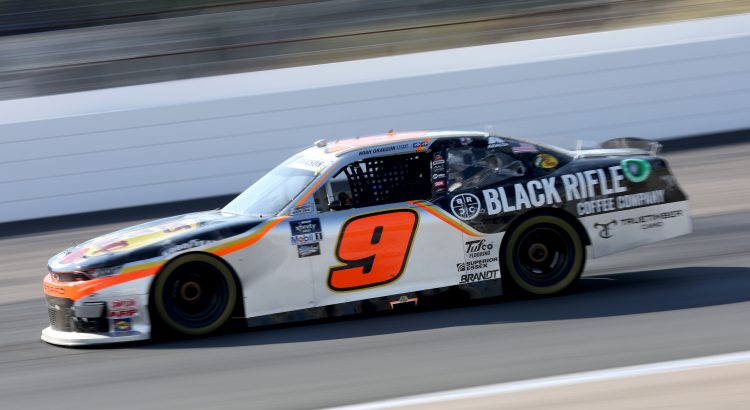 The Xfinity Series will join the Cup Series at Darlington this week. The Cup Series will start their playoffs this week, but the Xfinity Series still has three races left for drivers to earn a spot in a run for the 2022 championship. Jeremy Clements thought he earned a spot last week with his win at Daytona, but his car was found to be illegal when NASCAR took it to the R&D Center. Clements kept his win, but it will not give him a spot in the playoffs. The field is loaded this week so it will be tough for a driver without a win to get to Victory Lane at Darlington. The Sports Clips Haircut VFW Help a Hero 200 can be seen Saturday at 3 p.m. ET on USA Network.

The Xfinity Series was back to their regular practice and qualifying schedule after not having any track time last week. The Xfinity Series had 20 minutes to dial in their cars and then the teams lined up the cars for qualifying. The single-lap times do not matter much at Darlington since tire wear is so high. We need to focus on the drivers who were fast on the 10-lap average speed charts.

Here are the lap times from the practice Saturday at Darlington… 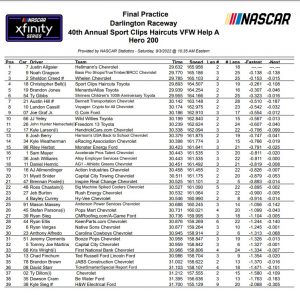 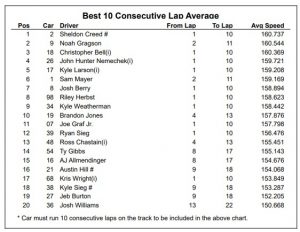 Darlington is a unique track. “The Track Too Tough to Tame” is a 1.366-mile, high-banked, egg-shaped track. Tire wear is huge at this track. The drivers who can search the track for grip typically run up front at Darlington.

We need to look at the other high-banked intermediate tracks in order to handicap the race at Darlington. The Xfinity Series competed at Darlington in May so that race gets double the weight in the Driver Rankings this week. I will also use the data from the races Las Vegas, Dover and Nashville (That is four races, including the first race at Darlington). 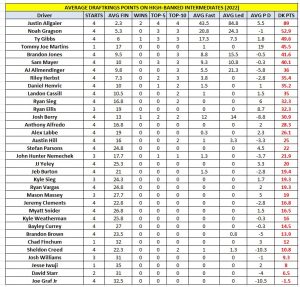 I expected the trend of two dominators to play out this week because I thought it was going to be a battle between Kyle Larson and Denny Hamlin. It was announced Wednesday that Hamlin will be replaced in the Joe Gibbs Racing car by Christopher Bell. Bell starts from the back so his dominator points will be limited today. This adds to Larson’s value this week, but do not sleep on Ty Gibbs, Noah Gragson and Justin Allgaier. They are very good at this track too.

We are going to have to pay up for at least two dominators this week. Kyle Larson is expensive but there is some value in the field that we can pair with him.

Christopher Bell did not post a qualifying lap because his team had to change the engine in their car. Bell will start from the back and be scored from the back in DraftKings contests today. He must be owned in all Cash Contests and I would go at least 80% of your Tournament Contests. 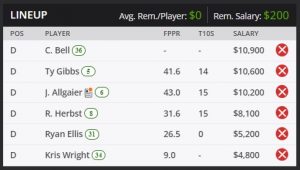 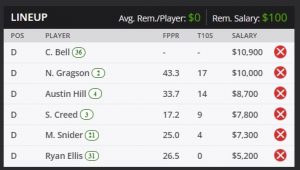