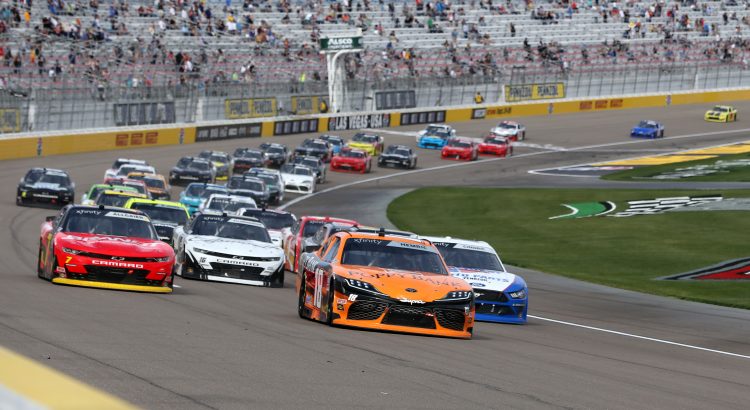 The Xfinity Series will join the Truck and Cup Series at Las Vegas Motor Speedway this week. The Xfinity Series is stacked with talent in 2022 and there are many drivers who have a good chance to win each race. We do not have a “Big Three” like we had in 2019 with Tyler Reddick, Chase Briscoe and Cole Custer or like in 2020 when the Xfinity Series had the “Big Two” with Austin Cindric and Chase Briscoe. The playing field is more even this year and that brings a lot of drivers into play. It also gives us a lot of different ways to construct our DFS lineups. The Alsco Uniforms 300 can be seen today at 4:30 p.m. ET on FS1. 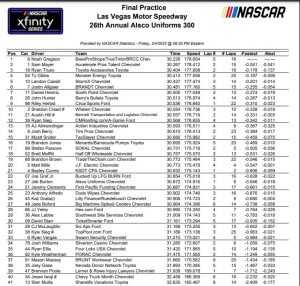 The Xfinity Series has unique rules for the race at Las Vegas. Each team is required to use the same car they used last week at Auto Club in the race Saturday. Some of the teams wrecked their car last week so they will use a new car at Las Vegas and have to start from the back. These drivers include: Sheldon Creed, Landon Cassill, Austin Hill, Brandon Brown, Bayley Currey, J.J. Yeley, Kaz Grala, Jade Bufford, Ryan Vargas, Matt Mills, Stephan Parsons and Ryan Ellis. These drivers will be scored from their qualifying position in DraftKings Contests, so most of them do not have a lot of value today.

The race Saturday is scheduled for 200 laps (201 miles). That means there are 50 laps available for leading laps and 90 points available for fastest laps (150 dominator points). The trend in the Xfinity Series is for one driver to lead 80 laps and two other drivers lead roughly 45 laps each. That means there should be one main dominator and two sub-dominators in the race Saturday. It will be important that we pay up for the drivers we think can lead the most laps at Las Vegas.

The drivers with the best chance to dominate the race today include: AJ Allmendinger, Noah Gragson, Daniel Hemric, Josh Berry and Ty Gibbs 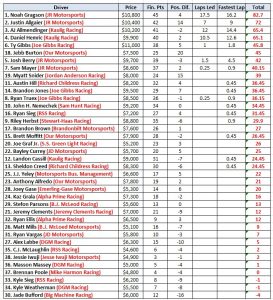 Noah Gragson $10,800 will be in a lot of my lineups Saturday. He is from Las Vegas and it is no secret that winning this race is important to Gragson. The No. 9 car posted  the fastest speed in practice and qualified fourth. Gragson is my top dominator for the race in Las Vegas.

Justin Allgaier $10,400 is a little more expensive what I would have liked to see. Allgaier is going to have to dominate a portion of this race in order to return value Saturday. He led seven laps and finished eighth last week and he led the most laps in the last race at Las Vegas (90 laps). The No. 7 car posted sixth-fastest speed in practice and qualified 16th. He is a lock for Cash Contests and is a good pick for Tournament Contests too.

A.J. Allmendinger $10,200 won this race last year. It was his only win on a 1.5-mile track last year. He came back to the track in the playoffs, led 20 more laps and finished seventh. Allmendinger starts on the pole and should dominate the race until Noah Gragson catches him. Allmendinger is fine for Cash or Tournament Contests Saturday.

Daniel Hemric $9,900 is always good on the 1.5-mile tracks. He led 74 laps and finished second in this race last year. Hemric came back in the playoffs and finished fifth at Las Vegas. The No. 11 car finished eighth and ninth at Las Vegas last year with Just Haley behind the wheel. Hemric should finish in the top-five Saturday.

Josh Berry $9,700 will be a popular pick Saturday. Everyone likes the underdog story and that is what people think of when they think of Berry (but he is no longer an underdog in his Junior Motorsports car). Berry led 38 laps and went to Victory Lane at Las Vegas in the playoffs last year. He also finished seventh in the March race in Sin City. The No. 8 car posted 14th-fastest speed in practice and qualified second. He said he liked his long-run speed. Berry should be a good pivot to be a dominator Saturday.

John H. Nemechek $9,200 is a little over-priced this week but he has had some success in the Sam Hunt Racing car. Nemechek posted the eighth-fastest speed in practice and he qualified 10th. He should have a decent chance to finish in the top-10. I will only play Nemechek in Tournament Contests.

Sam Mayer 8,600 is another Junior Motorsports driver I like Saturday. All of the Junior Motorsports finished in the top-10 last week (Noah Gragson 2nd, Josh Berry 4th, Sam Mayer 6th and Justin Allgaier 8th) and they will have a good chance to do it again at Las Vegas. The No. 1 car posted second-fastest speed in practice and qualified ninth. He should have a good chance to finish in the top-10 at Las Vegas.

Ryan Truex $8,500 has more car than he has talent this week. He will be driving the No. 18 car for Joe Gibbs Racing. The car posted the third-fastest speed in practice and Truex qualified seventh. He is a good pick for Tournament Contests Saturday.

Austin Hill $8,200 crashed his car last week so he will have to start in the back Saturday. Hill qualified 15th so he will have a lot of cars he will have to pass before he can score positive place differential points. I think he can do it.  Hill posted the 11th fastest speed in practice. Hill should be a good low-owned pick for Tournament Contests Saturday.

Myatt Snider $8,000 did not look great last week (he finished 26th at Auto Club). He posted the 15th fastest speed in practice but he got loose in qualifying. As a result he will start 34th Saturday. Snider will have a good chance to move up 10-15 spots in the race. Snider is a lock for Cash Contests and he will be in some of my Tournament Contest lineups too.

Jeb Burton $7,500 looked horrible in qualifying. He spun out his car but was able to save it. Now Burton will start last, so there is nowhere to go but forward. Burton posted the 23rd-fastest speed in practice so he should be able to move up 15-20 spots in the race. Burton is a lock for Cash Contests.

Bayley Currey $5,700 crashed his car last week so he will have to start in the back Saturday. Currey posted the 21st fastest speed in practice and he will be scored from the 27th starting position. Bayley should still be a good pick even though he is going to the back.

Joey Gase $5,300 wasn’t on my radar but then he went out and qualified 36th. Gase was slow in practice too but he is good at getting a lot out of his cars. He was 39th fastest in practice last week and Gase finished 20th. I am expecting a similar race from Gase Saturday.

Joe Graf Jr $5,200 will be driving the 07 car for S.S. Green Light Racing. This is the team that Cole Custer raced for last week and went to Victory Lane. Graf also had a good race at Auto Club. He started 18th and finished 15th. Graf is a great “punt play” this week. 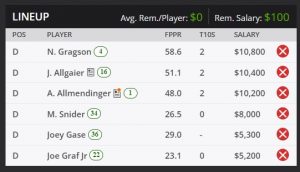 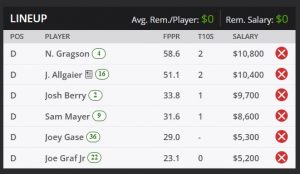