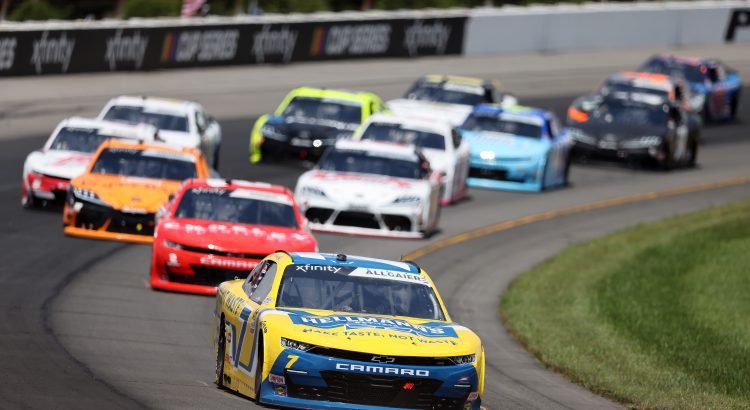 The Xfinity Series had their regular practice schedule this week. The teams were broken down into two groups and they had 20 minutes to dial in their cars for the race. Pocono is a 2.5-mile, flat, triangle-shaped track. Some teams decided to run the entire practice so that they could get an idea of their long-run speed. We should be able to learn a bit from practice Saturday. The cars are impounded after qualifying so the speed the cars had in practice is the speed the teams will start the race with Saturday. 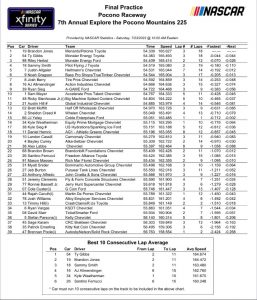 Pocono is a unique track. Some driver’s say it races like a road course, others say it is like a Super Speedway because the draft can come into play on the long front and back-stretches. I am relying on practice speeds and momentum over the last month more than usual this week, but I will also look at the driver’s performances on the large tracks this year. This includes the 1.5-mile and 2-mile Intermediate tracks. 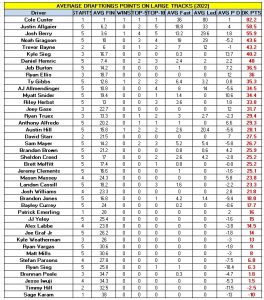 It is also a good idea to select as many drivers from Joe Gibbs Racing and Junior Motorsports this week. These drivers have been dominating the Xfinity Series this year. I see no reason why this trend will not happen again Saturday. These drivers include: Ty Gibbs, Brandon Jones, Sammy Smith, Justin Allgaier, Noah Gragson, Josh Berry and Sam Mayer.

Do not forget about Cole Custer. He won the race at Auto Club and finished 3rd at COTA in the No. 07 car for SS Green Light Racing. Custer should be good again this week. Ricky Stenhouse Jr. will be behind the wheel of the No. 48 car this week for Big Machine Racing. Tyler Reddick won in this car Texas, but I only predict a top-10 finish for Stenhouse this week. 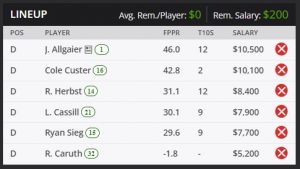 JUSTIN ALLGAIER ($10,500):  Ty Gibbs may be the better choice based on the speed of the Joe Gibbs Racing cars in practice, but I will take a chance with Allgaier. He has been the best driver in the Xfinity Series for the last two months. Allgaier won three of the last seven races. There is a good chance that the No. 7 car is in Victory Lane tonight.

COLE CUSTER ($10,100):  I was expecting a lot more from Custer in practice and qualifying. He only posted 30th fastest speed in practice but I am not worried about it. Custer will be good in the race and he should finish in the top-10 from his 16th starting position.

RILEY HERBST ($8,400): Herbst is my sleeper pick to win today. Stewart-Haas Racing purchased some of the Team Penske Xfinity Series before the season. The car Herbst will be in this week is the car Austin Cindric drove to Victory Lane at Pocono last year. The car still has speed. Herbst posted the third-fastest speed in practice with the third-fastest speed on the five-lap average speed chart. Herbst is too cheap to ignore today.

LANDON CASSILL ($7,900): I will roll the dice with Cassill today. He almost won the race last week but was DQ’d for failing race inspection. Now Cassill starts 21st with a good chance to finish in the top-10. Cassill is the most under-priced driver on the DraftKings slate, so I will take the discount and play him today.

RYAN SIEG ($7,700): Sieg is a great value pick for $7.7K. He posted the ninth-fastest speed in practice. I need drivers who can finish in the top-10 and Sieg checks that box. He should score well from the 15th starting position.

RAE CARUTH ($5,200): Caruth will be my “punt play” in the Cash Contest lineup. Caruth is a young driver who has more talent than he has car. I am hoping his talent can get him inside the top25. Caruth was 26th on the five-lap average speed chart and he starts 31st. His Spire Motorsports car should be fast enough to move up a few spots today. 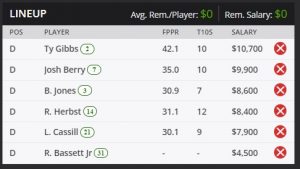 TY GIBBS ($10,700):  Gibbs will have a good chance to win today. He won an ARCA Menards Series race at Pocono and he finished second in the Xfinity Series race last year. Gibbs had the second-fastest car in practice and the fastest car on the long-runs. Gibbs should easily be one of the top dominators and finish in the top-five with the upside to win the race.

JOSH BERRY ($9,900): I would love to have Justin Allgaier in my lineup but I cannot afford the No. 7 car so I will pivot to Berry. He has been the second-best driver for Junior Motorsports this year and he will have a good chance to finish in the top-five today. Berry posted the seventh-fastest speed in practice with the fourth-fastest speed on the five lap average speed chart. Berry always exceeds expectations and I expect the same today.

BRANDON JONES ($8,600): I really like the Joe Gibbs Racing cars today. Jones said before qualifying, “I learned a lot yesterday in the ARCA Menards Series race. I learned how the resin activates on the track and where the grip is.” He must have learned something because Jones posted the fastest speed in practice. Jones has a car fast enough to win the race at Pocono.

RILEY HERBST ($8,400) /LANDON CASSILL ($7,900): Herbst and Cassill are the best value picks in the field today so I will play these two drivers in the Cash and Tournament Contest lineups today. We need drivers who have a good chance to score some place differential points and finish in the top-10. Herbst and Cassill check both boxes.

RONNIE BASSETT JR. ($4,500):  I need a cheap driver in order to select five drivers who can finish in the top-10 and have a few drivers with a good chance to score dominator points. I will go all the way down to the bottom of the salary list and select Bassett. Will he start and park? I have no idea. If he does, he will score -4 DK Points, so there is some risk. Bassett starts 31st and posted the 29th fastest speed in practice. If he stays on the track, Bassett should score 10+ Dk Points. That should be enough if the five drivers listed above finish in the top-10.