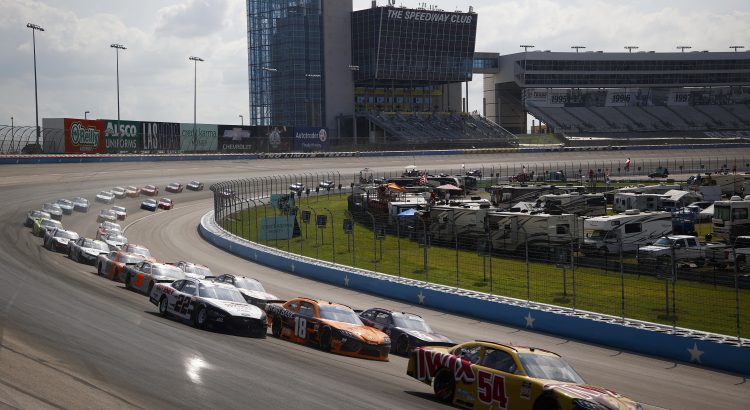 The Xfinity Series took a week off and now they will join the Cup and Truck Series at Texas Motor Speedway. The Xfinity Series has been a good battle between Joe Gibbs Racing and Junior Motorsports, with Kaulig Racing stacking top-10 finishes. This trend should continue in the Lone Star State. When we add William Byron and Tyler Reddick to the field, we will have a lot of good choices for our DFS lineups this week. The SRS Distribution 250 can be seen Saturday at 1:30 p.m. ET on FS1. 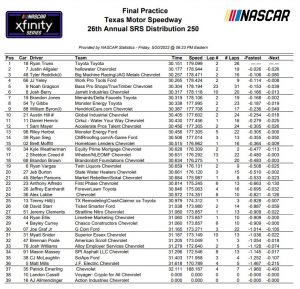 Texas Motor Speedway was repaved before the 2018 season and they sure screwed it up. The racing used to be decent in “No Limits Texas” but then the decided to change the shape and now the drivers can run wide open around the track. The racing has been pretty boring so it is probably good that NASCAR shortened the race from its typical 200 laps at Texas to 167 this week. 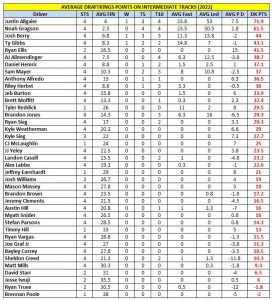 The trend for the dominator points to get spread out and the same has been true at the intermediate tracks this year. I expect this race to play out like the race in 2020. Noah Gragson led 43 laps, Justin Allgaier led 35 laps, Chase Briscoe led 34 laps, Ross Chastain led 30 laps and Harrison Burton lead 24 laps. These drivers scored between 20.65 and 14.1 dominator points. My strategy this week will be to try and select as many drivers as possible who can finish in the top-10 and hope three of the drivers dominate a portion of the race.

WILLIAM BYRON ($11,000): Byron will be behind the wheel of the No. 88 car this week for Junior Motorsports. This will be his first race in 2022 in the Xfinity Series. He did drop down to the Truck Series and won the race at Martinsville. The No. 88 car finished 9th at COTA with Miguel Paludo behind the wheel and it finished 11th at Martinsville with Dale Earnhardt Jr. behind the wheel. Chase Elliott was supposed to drive the car at Darlington but qualifying was rained out and Elliott did not make the race. I would not be surprised if Byron won the race Saturday.

TY GIBBS ($10,700): There is no doubt who will have the fastest car in the field Saturday. The No. 54 car is always the fastest and Gibbs usually finishes in the top-five when he does not wreck the car. The most similar track to Texas on the Xfinity Series schedule this year is Las Vegas. Gibbs started 11th ad won that race. He should be one of the top dominators and have a good chance to win again at Texas.

NOAH GRAGSON ($10,500): Gragson has been a beast in the No. 9 car this year. He won at Phoenix and Talladega and Gragson finished second at Fontana, Las Vegas and Darlington. He has led laps in 8 of the 11 races this year. Gragson should be one of the top dominators and have a good chance to win today.

JUSTIN ALLGAIER ($10,300): Who has scored the most DFS points on the intermediate tracks this year? Of course it is Allgaier… I posted it right above my list of core drivers..LOL. I was shocked to see Allgaier has been this good. I thought Ty Gibbs or Noah Gragson would have been the best pick in DFS contests, but it has been Allgaier. He won the last race at Darlington and he finished 2nd last year at Texas. Allgaier should be one of the best picks in DraftKings again this week.

TYLER REDDICK ($10,000): Reddick will be behind the wheel of the No. 48 car for Big Machine Racing. This is the car that Jade Bufford and Kaz Grala have been driving this year. It has only finished in the top-20 once and that was at COTA with Bufford behind the wheel. Reddick drove this car at Darlington two weeks ago. He started 34th (because qualifying was rained out) and he finished 26th. Reddick has the talent to finish in the top-10 today, but temper your expectations when you select Reddick for your DFS lineup.

JOSH BERRY ($9,600): We shouldn’t stereotype Berry as a “short-track expert” anymore. He has been good at all types of race tracks. Berry won at Dover, finished 3rd at Phoenix and fourth at Auto Club and Las Vegas. You can never have too many Junior Motorsports cars in your lineup, so I will have a few shares of Berry today.

AJ ALLMENDINGER ($9,700): Do you like consistency? Allmendinger is about to set the NASCAR Xinity Series record for most consecutive top-10 finishes to start the season. Allmendinger has finished every race this year in the top-10 and there is no reason to believe he will not extend his streak today. NASCAR did not like the look of Allmendinger’s car before practice so they would not let him on the track. I still think the No. 16 car will be fine without any practice.

SAM MAYER ($9,100): How much ownership will Mayer get when he has William Byron, Noah Gragson and Justin Allgaier as teammates this week? I expect all of those drivers to be highly owned, but Mayer has just as good of a chance to run up front as they do. He finished 5th three weeks ago at Dover and he finished 5th again two weeks ago at Darlington. Mayer will have a good chance to make it 3 consecutive top-5 finishes in the Xfinity Series.

DANIEL HEMRIC ($8,900): Hemric has not had a lot of success with his new team (Kaulig Racing) this year. His average starting position is 11.1 and his average finishing position is 15.7. If he is ever going to get to Victory Lane it should be this week. Texas ranks as his best track. Hemric has finished 3 of his last 4 races at Texas in the top-4. He has not finished outside the top-10 at Texas since 2017. Hemric should be a safe play for your lineups today.

LANDON CASSILL ($8,300): I wasn’t planning on using Cassill Saturday because he hasn’t been great this year and then Cassill backed his car into the wall in practice. The team brought out the backup car and now Cassill will start from the back and be scored from the back in DraftKings contests. Cassill should have a good chance to score 15-20 place differential points. I will have him in most of my Cash Contest lineups.

RYAN SIEG ($7,700): I have been playing Sieg almost every week so why quit now? He is having his best season in the Xfinity Series. Sieg has finished 10 of his 11 races in the top-11 this year. The only race he did not finish in the top-11 was at Las Vegas when Ty Gibbs ran him into the wall while Sieg was running in the top-5. Sieg has been one of the best picks in DraftKings contests this year so I will use him again today.

JEFFREY EARNHARDT ($7,900): Earnhardt almost won his last race in the Xfinity Series car but that was in a Richard Childress Racing Chevy. Now he will be driving Sam Hunt Racing car. This car has less speed but Earnhardt got loose is qualifying and now he starts 35th. Earnhardt should easily move up 10 spots in the race Saturday.

ANTHONY ALFREDO ($7,600): I am going to get a nice dish of “Fast Pasta” for the race at Texas. Alfredo has been incredibly consistent this year in the No. 23 car for Our Motorsports. He has finished his last 7 races in the top-16. That includes a 13th-place average finishing position. Alfredo scraped the wall in qualifying so he will start in the back Saturday. He should be one of the highest scoring place differential drivers in the race.

RYAN ELLIS ($6,700): Ellis is not the first driver that comes to mind when you think of the highest scoring drivers in DraftKings contests on the intermediate tracks this season. It is true… his 41.5 DK Points per race are 5th best in the series. Ellis started 35th and finished 13th at Las Vegas. He started 38th and finished 16th at Phoenix and he started 28th and finished 20th at Dover. That is a lot of place differential points. I will play Ellis today and see if he can continue to score place differential points for my team.

BAYLEY CURREY ($5,600): Currey is always one of the best value picks in DraftKings contests. I am not sure why DK hates him so much but I guess Curey is something you either love or hate. Currey finished 17th at Texas last year. He also finished 18th at Las Vegas earlier this season. Currey should have a good chance to finish in the top-20 today. 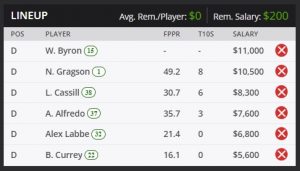 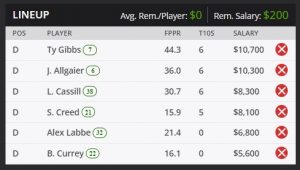