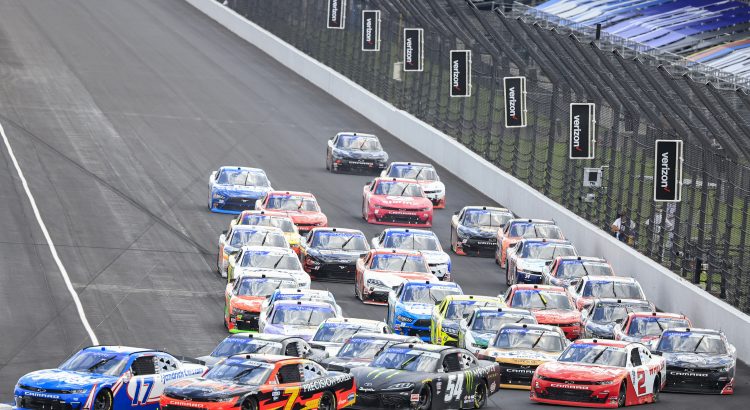 The Xfinity Series will join the Cup Series at Watkins Glen this weekend. The Truck Series already started their playoffs and the Cup Series playoffs begin in a few weeks. That is not the case for the Xfinity Series.”The Series Where Names are Made” still have five races before their playoffs begin at the end of September. There is still time for these drivers to secure their spot in the playoffs and it will be fun to see how these final races play out. The Sunoco Go Rewards 200 can be seen Saturday 3 p.m. ET on USA Network.

The race is absolutely stacked this week. It will be fun to watch the “race inside the race.” Who will win? The Xfinity Series or the Cup Series Saturday? AJ Allmendinger, Ty Gibbs, Justin Allgaier, Noah Gragson and Austin Hill have the best cars from the Xfinity Series regulars, while Kyle Larson, William Byron, Ross Chastain and Cole Custer all have fast cars from the Cup Series. There will be many good choices for our DraftKings lineups today.

The Xfinity Series had their regular practice schedule this week (Don’t get me started on how it sucks that most people could not see it). The teams had 20 minutes to dial in their cars for the race. Watkins Glen is a 2.45-mile road course so the teams did not have time to make many long runs in practice. The driver’s qualifying position will tell more about the driver’s speed because there was a lot of traffic on the track in practice that slowed down some of the cars. It still doesn’t hurt to look at the driver’s practice speed. 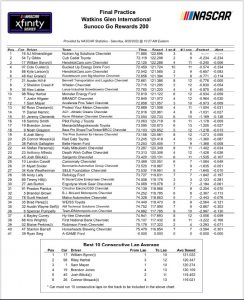 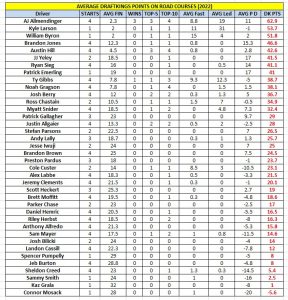 The trend in the Xfinity Series races at Watkins Glen is for one driver to lead 42 laps and be the main dominator in the race. There are typical two other drivers who lead 24 and 10 laps in the race. That is not enough dominator points to chase this week. My strategy will be to try and select at least five drivers who have a good chance to finish in the top-12 today.

The class of the field includes AJ Allmendinger, Kyle Larson, William Byron, Ty Gibbs, Ross Chastain, Cole Custer, Justin Allgaier, Noah Gragson and Austin Hill. I want as many of these drivers in my lineup as possible. There are some cheap drivers who are good on the road courses who we can pair with the studs listed above. These drivers include Alex Labbe, Kaz Grala, Preston Pardus and Parker Gallagher. 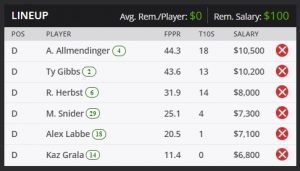 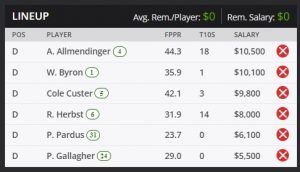