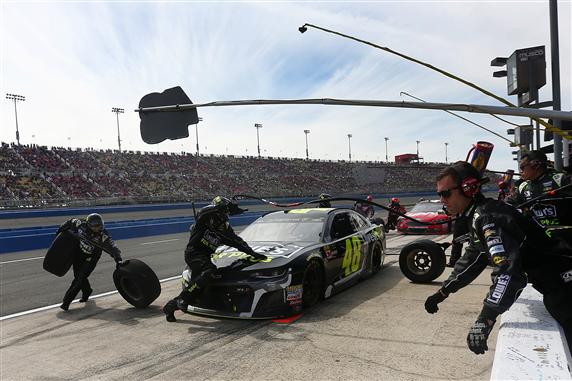 The Monster Energy NASCAR Cup Series will complete the west coast swing this week when they waive the green flag at Auto Club Speedway. The same aero package used at Las Vegas will be used in the race this week. The racing should be closer and there should be a lot more passing from what we have seen in typical races in California. The Auto Club 400 is scheduled for 3:30 p.m. ET on Fox.

The rough surface at Auto Club is similar to Atlanta and the aero package used this week is the same as the race at Las Vegas. For that reason I am concentrating on the results from those two races more than the past races at Auto Club Speedway. Practice speeds will not be as important this week as they were at Phoenix. The draft is going to come into play at this track so the fast cars will be getting pulled through the air by the cars in front of them. It will be important to check out the Garage Talk Notes to see who has the best handling cars. So far this season it has been the Team Penske cars.

The race at Las Vegas went caution free. We may see the same thing Sunday. There is more space at Auto Club so if the drivers were able to stay out of trouble on the tight, bumpy track in Sin City, they should easily avoid problems outside of L.A. This means track position will be important this week.

The race this week at Auto Club may be hard to predict. The drivers who performed well at the track in the past may not be up front Sunday. The drivers who can manipulate the draft are the ones we will want on our team Sunday. I also expect qualifying to be crazy. Fast cars will start in the back and slow cars will start up front. We need to know who is fast and who is slow so we can gain an advantage in our DFS lineups. Do not worry, I will find out for you.

The race this week is 200 laps (400 miles). That means there are 50 points available for leading laps and 100 points available for laps led. There are 50 less bonus points in this race than there are in a typical 1.5-mile race (267 laps). The trend at Auto Club is for the race to have two main dominators. The first dominator leads 125 laps and score 50 fastest laps. The second dominator leads 54 laps and scores 28 fastest laps. We can expect to have two dominators again Sunday but they likely will not lead as many laps or score as many fastest laps based on what we saw in Las Vegas. The laps led and fastest laps will be more spread out and took away 15% of the dominator points from what we have seen in the past at Las Vegas. So this week we still need two dominators but we may be able to get away with just one if a driver looks to have an edge on the competition.

The drivers I expect to be the top dominators this week are: Kyle Busch, Joey Logano, Martin Truex Jr., Kevin Harvick and Kyle Larson

The drivers who could be the top value picks (Under $9K) for the race Sunday include: Clint Bowyer, Ryan Blaney, Ricky Stenhouse Jr. and Austin Dillon

The drivers I expect to be the best cheap drivers (Under $7K) for the race Sunday include: William Byron, Daniel Hemric, Ryan Preece and Ty Dillon

My Fantasy Live picks continue to perform well. I thought we would get a lot more out of Kevin Harvick at Phoenix but he did not perform well in the new aero package. My picks are still beating 98.2% of the competition so that is not bad. We need a good race this week to climb even higher.

*Pick for the Pole*: Our pick for the pole needs to be in before qualifying at 5:30 p.m. ET Friday. My pole pick will be posted after final practice Friday (2 p.m. ET).

Martin Truex Jr. (9): Truex absolutely dominated this race last year. He won the pole, led 125 of the 200 laps and both Stages on the way to Victory Lane. In 2017 he led 73 laps and finished 4th. There will be a new aero package this week so Truex may not be as dominant as he was in the past at Auto Club. Truex finished 2nd at Atlanta and 8th at Las Vegas. I still expect the No. 19 car to be up front, score a lot of Stage points and have a good chance of winning the race Sunday.

Joey Logano (8): Logano won the Pennzoil 400 at Las Vegas in the Pennzoil paint scheme. Can he win the Auto Club 400 in the Auto Club paint scheme? I think so. The draft is going to come into play more at this track than it did at Las Vegas because of the size of Auto Club Speedway (2-mile oval). Logano is the best driver in the garage at side-drafting and using the draft to his advantage. Logano has the best average finishing position since the MENCS playoffs began last year. I will plan to the driver on a hot streak this week.

Brad Keselowski (9): Keselowski has been the best driver so far this season in the new aero package. He won the race at Atlanta and finished 2nd at Las Vegas. His stats at Auto Club are pretty good too. Keselowski has not finished outside the top 10 at this track since 2014. His average finishing position in the last four races at Auto Club is 4th. The No. 2 car should finish in the top 5 this week.

Kyle Larson (9): Fantasy players need to simply select Larson for their team and move onto the next pick whenever the MENCS travels to 2-mile oval track. Larson has led 110 laps and finished 1st and 2nd in his last two races at Auto Club. He likes to run the high-line but that may not benefit him this week. Drivers will be able to run wide-open at the bottom of the track so holding it wide-open at the top will make him travel further at the same pace. Larson is one of the most talented drivers in the garage so I expect him to figure it out quickly. He led 142 laps at Atlanta and that surface is similar to Auto Club.

Aric Almirola (9): Almirola has been one of the most consistent drivers in the MENCS since the playoffs began last year. Almirola has finished every race since last August on 1.5-mile or 2-mile ovals in the top 10. His average finishing position in these races is 8th. Almirola finished 7th at Las Vegas and 8th at Atlanta. I expect the No. 10 car to finish in the top 10 again in California.

My Garage Driver will likely be Kyle Busch.  I would like to get through this race without having to use another allocation with Kevin Harvick or Busch, but I want one of them on my team as an insurance policy. Busch is looking for his 200th win across the top three series in NASCAR. I know it is debatable whether this is a significant accomplishment, but it is very important to Busch. He will be extra motivated to get to Victory Lane Sunday.