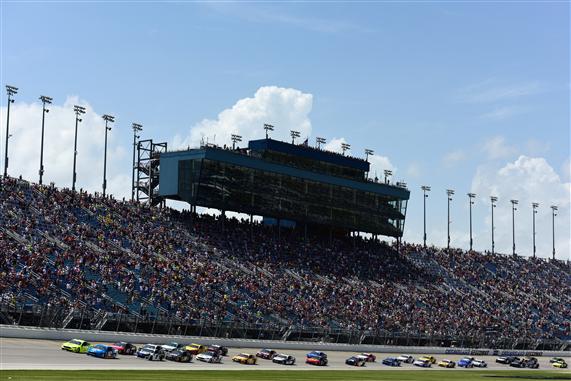 The MENCS will return to the Heartland Sunday for some exciting racing at Chicagoland Speedway. The race at Chicago was one of the best of the 2018 season. I expect the same this week. This track is bumpy and wears out tires because of the harsh winters in the Midwest. Pit strategy and getting their cars at the perfect height to navigate the bumps will be the key to success at Chicagoland. The Camping World 400 can be seen Sunday at 3 p.m. ET on NBC Sports Net (Yes, NBC. Not Fox…so make sure you have the right channel).

Paul Menard won the pole for the race at Chicago last year but he failed to lead a lap. Aric Almirola dominated the early portion of the race. He led a race-high 70, won Stage 1 and finished 25th. Kevin Harvick passed (and pissed off) his teammate, Kurt Busch on the last lap of Stage 2. Harvick led 39 laps, won Stage 2 and finished 3rd. Martin Truex Jr. started 36th because his far could not pass pre-race inspection. Truex was able to race all the way to the 3rd spot in Stage 1. Truex finished 4th in Stage 2 and finished 4th in the race. Kyle Busch and Kyle Larson fought for the lead in the last Stage. SLIDE JOB!!!!!!! SLIDE JOB!!!!!!! Larson slid up in front of Busch to take the lead on the last lap. Busch gained momentum and pushed Larson out of the way to win his 2nd race at Chicagoland Speedway.

There are 267 laps scheduled for the race Sunday. That means there are 66.75 points available for leading laps and 133.5 points available for fastest laps. There typically are more dominators at Chicagoland Speedway than at other tracks. The trend is for one driver to lead 75 laps and three other drivers to lead between 20-35 laps. That brings four dominators into play this week. We will need at least two of these drivers in our lineups Sunday.

The drivers I expect to dominate the race Sunday include: Martin Truex Jr., Kyle Busch, Chase Elliot and Kevin Harvick

The Fantasy Live picks took a hit last week. Chase Elliott was running up front but his engine blew halfway through the race. Clint Bowyer was in 6th place when he had to pit for a loose wheel. Kurt Busch had his fenders caved in on lap one. I am glad that race is over. No it is on to Chicago which should be a more predictable track.

*Pick for the Pole*: Our pick for the pole needs to be in before qualifying at 6:30 p.m. ET Saturday. My pole pick will be posted after the final practice Saturday.

Kyle Busch (3): Joe Gibbs Racing and Team Penske have dominated the races on the 1.5-mile tracks this season so I plan to roll with two drivers from each team. Busch won this race last year by using the chrome horn to move Kyle Larson out of the way. If he has the chance to do the same Sunday he will do it again. Love him or hate him, you have to like having a driver on your team who will do anything to win. Busch should be a lock for a top-5 finish in Chicago.

Martin Truex Jr. (4): Truex is my pick to win Sunday. He won the last race on a 1.5-mile track (Charlotte) and it would not surprise anyone if he was in Victory Lane again Sunday. Truex has been the most consistent driver at Chicagoland Speedway over the last 3 seasons. He won the races in 2016 and 2017 and he finished 4th at the track last year. Truex is the best pick in the field on paper so I will use another allocation with the No. 19 car Sunday.

Brad Keselowski (3): Keselowski is the safest driver in the field this week. He has not finished worst than 9th at the track since 2010 (that is 8 consecutive top-nine finishes). Keselowski knows his way to Victory Lane in the Heartland. He won the races at Chicagoland Speedway in 2012 and 2014. There have been five races this season on 1.5-mile tacks and Keselowski has won two of them (Atlanta and Kansas). He should score a lot of Stage points and finish in the top five Sunday.

Joey Logano (4): Logano has also been a top-10 machine at Chicagoland Speeday. Logano has not finished outside the top 10 in this race since 2013. He has also scored Stage points in every Stage at the track since NASCAR began awarding Stage points. Logano won the last race using the 550 HP engine (at Michigan) and he should be a threat to win again this week. I have no problem using another allocation with Logano in the Camping World 400.

Chase Elliott (4): Elliott has been good at Chicagoland Speedway in his career. He has finished two of his three races at the track in the top three and he has scored Stage points in every Stage. Elliott has been very good since his win at Talladega. No driver has a better average finishing position than Elliott since the end of April. I expect Elliott to score a lot of Stage points and be one of the drivers racing in the top five at the end of the race Sunday.

My Garage Driver this week will likely be Kyle Larson (7). Larson has been great at Michigan because of his ability to run up against the wall. The lower horsepower cars should make the bottom of the track the fast way around Chicagoland Speedway this week so I am not so sure Larson will have the same advantage he had in the past. The bottom line is that Larson is one of the best drivers at this track. His average finishing position in his five races in 7th and he has scored Stage points in every Stage. I at least need to have Larson in the Garage Sunday.