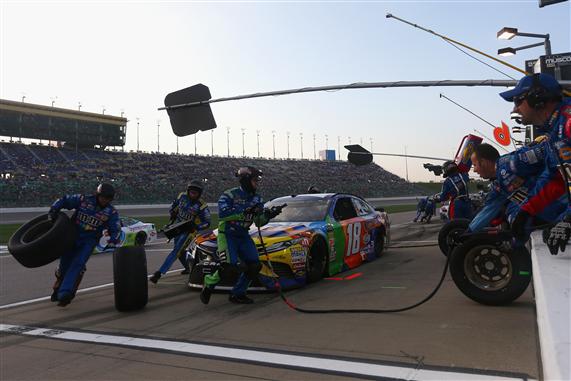 The Monster Energy NASCAR Cup Series will compete under the lights this week at Kansas Speedway. The combination of new asphalt and the higher-downforce areo package should prove for some fast racing Saturday night. The Digital Ally 400 can be seen Saturday night at 7:30 p.m. ET on Fox Sports 1.

The MENCS will have fewer practices this week since they are cramming all on-track activity into one day. The first practice is Friday at 12:30 p.m. ET (No TV) and final practice will be Friday at 2:30 p.m. ET on FS1.  Qualifying is Friday at 7 p.m. ET (FS1). Our Fantasy Live pole picks must be in by 7 p.m. ET Friday.

Kevin Harvick dominated the night race at Kansas last year. The No. 4 car won the pole, finished 2nd in both Stages and led 79 laps on his way to Victory Lane. Kyle Larson also had a dominant car. The No. 42 car took the lead from Harvick, led a race-high 101 laps, won Stage 2 and finished 4th. Ryan Blaney also looked good. The No. 12 car led 54 laps, won Stage 1 but crashed at the end of the race. These three cars should be good again Saturday night.

There are 267 laps in the race Saturday night. That means there are 66.75 points available for leading laps and 133.5 points available for fastest laps. Instead of looking at the previous races at Kansas, I am looking at the races on the 1.5-mile tracks this season to determine how many dominators we need for the race. This aero package has allowed for a lot more drivers to lead laps so the amount of dominators may change from what we have seen in the past at Kansas.

The drivers I expect to dominate the race Sunday include: Kyle Busch, Martin Truex Jr., Kevin Harvick and Brad Keselowski

When will I learn? Every time NASCAR sends a driver to the back for failing inspection I take the driver out of my lineup. More often than not, the driver wins the race or finishes in the top 5. That is what happened at Dover. I had Martin Truex Jr. picked to win the race and Toyota as the winning manufacturer. I switched him with Kevin Harvick after the No. 19 car was sent to the back. It cost me a lot of points. I will not make that mistake again.

*Pick for the Pole*: Our pick for the pole needs to be in before qualifying at 7 p.m. ET Friday. My pole pick will be posted after the final practice Friday (4 p.m. ET).

Martin Truex Jr. (7): Kansas is one of the best tracks for Truex. He has finished 1st, 1st, 2nd and 5th in his last four races in the Heartland. It does not get much better than that. Truex also has a series-high 208 laps led over the last four races at Kansas. So far this season the No. 19 team is trying to find their groove on the intermediate tracks. Truex finished 2nd at Atlanta, 8th at Las Vegas, 8th at Auto Club and 12th at Texas. I have a feeling this is the week Truex gets back to dominating the 1.5-mile tracks.

Kevin Harvick (9): Harvick has been one of the most consistent drivers at the intermediate tracks this year and he is very good at Kansas. Harvick finished 4th at Atlanta, Las Vegas and Auto Club. He was also able to lead 133 laps in these races. Harvick has a series-high 123.1 driver ranking in the last four races at Kansas. Last year he dominated the night race at Kansas and he should be a lock for a top 5 finish. I will use another allocation with the No. 4 car Saturday night.

Brad Keselowski (8): Keselowski has been one of the best drivers on the intermediate tracks this season. He won the race at Atlanta, finished 2nd at Las Vegas and 3rd at Auto Club. His stats at Kansas are pretty good too. Keselowski has the fourth-best average finishing position in the last four races at the track. Keselowski usually qualifies in the top 5 so that should make him a good pick for Stage points. He is a safe pick for our team this week.

Denny Hamlin (8): Hamlin is a safe pick this week. He won at Texas and that track is similar to Kansas. Hamlin has a 7.2 average finishing position in the four intermediate track races this season. He is also good at Kansas. Hamlin has finished two of the last three races in the Heartland in the top 5. I have no problem using another allocation with Hamlin Saturday night.

Ryan Blaney (10): The racing surface at Kansas is still wearing in and that means it will be lightning fast with the current aero package. No driver in the series performs as well as Blaney on fast tracks. He has led laps in the last four races at Kansas and has scored Stages points in every Stage at Kansas since NASCAR implemented the Stage rules. This is one of his best tracks so it would be a good idea to get the No. 12 car into your lineups this week.

My Garage Driver this week will likely be Kyle Busch. I am low on allocations with Busch but this is a race he could dominate. I go to each race at Kansas and I remember a time when I would joke in the press box about what lap Busch would crash on at Kansas. It was by far his worst track. Then Carl Edwards joined Joe Gibbs Racing. Edwards told Busch something about racing at Kansas and the No. 18 car has been awesome at the track ever since. The No. 18 car is a good insurance policy to have this week.