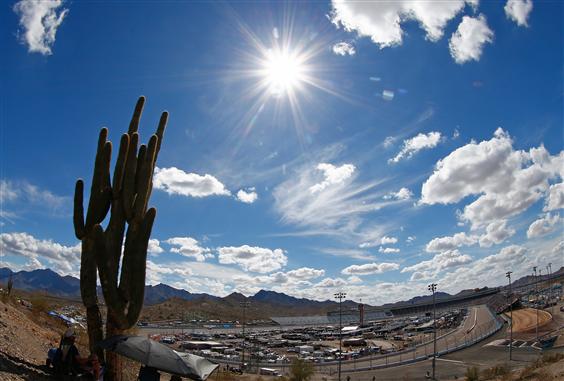 The Monster Energy NASCAR Cup Series will stay out west this week for the second race of the west coast swing. The cars will compete at ISM Race (Phoenix). The track was reconfigured last year. The finish line was moved to the old backstretch. It made for an interesting race since drivers could cut the dog-leg as they crossed the start / finish line. The race should be very exciting this week. The TicketGardian 500 can be seen Sunday at 3:30 p.m. ET on Fox.

I am looking back at the November race at Phoenix to analyze the race for the Sunday. The location of the start / finish line made a difference, so the results this week should be closer to the November results then the March results in 2018. Kevin Harvick won the pole and led 73 laps but a flat tire sent the No. 4 car two laps down. Chase Elliott took the lead and won Stage 1. Kurt Busch dominated Stage 2 but he passed the pace car under caution so he was penalized 1 lap. After a HUGE wreck at the end of the race, Kyle Busch held off Brad Keselowski to win the race.

It’s All in the Loop 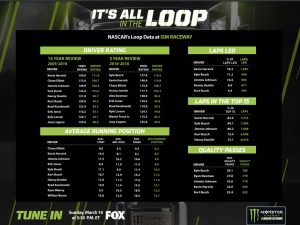 The race this week at Phoenix should be easier to predict. The cars will be back to 750 horsepower but will still have the 8-inch spoiler in the back to add downforce. The draft will not be a factor this week so the racing should be closer to what we saw previously at Phoenix.

The drivers I expect to be the top dominators this week are: Kyle Busch, Kevin Harvick, Chase Elliott and Denny Hamlin

The drivers who could be the top value picks (Under $9K) for the race Sunday include: Erik Jones, Daniel Suarez, Alex Bowman, Ryan Newman and William Byron

The drivers I expect to be the best cheap drivers (Under $7K) for the race Sunday include: Daniel Hemric, Chris Buescher, Matt DiBenedetto, Ty Dillon and Michael McDowell

My Fantasy Live picks continue to perform well. After three very unpredictable races, the picks scored 587 points and are beating 97.6% of the competition. Not too bad but we still have some work to do to get into the top 100% overall.

*Pick for the Pole*: Our pick for the pole needs to be in before qualifying at 6 p.m. ET Friday. My pole pick will be posted after final practice Friday (3 p.m. ET).

Kevin Harvick (8): When the MENCS travels to Phoenix you must have Harvick on your team. He is not as dominant at the track as he was between 2012 – 2016 (He won 6/8 races in the time period) but he is still very good. Harvick has a 2.4 average finishing position in the last 11 races at Phoenix. Wow! And he led 1,175 in those races. To say Harvick knows his way around this track is an understatement. This is one of those races where you plan on burning an allocation with the No. 4 car.

Kyle Busch (9): As good as Harvick is at Phoenix, Busch mighthave been a little better last year. Busch finished 1st and 2nd in the two races at the track in 2018. He led 128 laps in the March race and 117 laps in the November race. Busch was pissed after the race in Las Vegas because he did not complete the sweep in his home town. Whenever Busch is extra motivated for a race I make sure he is on my team. I think Busch will be the 4th driver in 4 races to visit Victory Lane this season.

Brad Keselowski (9): Team Penske has been the best team through the first three races. I want at least one of their drivers in my lineup. Since this is not a good track for Joey Logano or Ryan Blaney, I will go with Keselowski. The No. 2 car almost won the race at Phoenix 4 months ago. He was chasing down Kyle Busch but ran out of laps. This team is already locked into the playoffs so they can gamble for track position. I expect Keselowski to be up front again Sunday.

Denny Hamlin (10): Hamlin was running 2nd in the last race at Phoenix when he got into a wreck with Kurt Busch and took out half of the field. I doubt that will happen again. Hamlin has been hit or miss at Phoenix in his career but he is off to a hot start in 2019 so I will play him. Hamlin has led 226 laps between the last three races in Phoenix. Momentum is important in Fantasy NASCAR so I will play Hamlin while he is on a hot streak.

Aric Almirola (9): Almirola has been on fire since the playoffs began last year. Almirola ran two races in a Stewart-Haas Racing car at Phoenix. He finished 7th in March and 4th in November. Almirola even finished 9th in his last race at Phoenix while driving for Richard Petty Motorsports. This is the 4th-best track for Almirola so there is no need to save an allocation with him Sunday. He should be a lock for a top-10 finish.

My Garage Driver will likely be Chase Elliott (10) or Erik Jones (10). Both of these young drivers have had a lot of success at Phoenix. Elliott has a 6th-place average starting position and a 9th-place average finishing position. He has also led 140 laps over the past 2 seasons at Phoenix. Jones has an 8.4 average starting position and a 11.4 average finishing position at the track. This is one of the better tracks for Joe Gibbs Racing so I expect Jones to be fast this week. I will watch these two drivers in practice and decide with will be on our team Sunday.