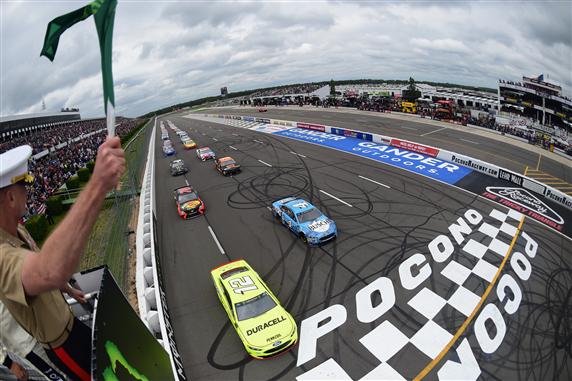 The 2019 NASCAR season is flying by. We are already though 20 races and only 6 races away from the start of the playoffs. The action on the track will like heat up as much as the temperatures this summer as the drivers battle for their spot in the playoffs. The first race at Pocono was one of the less exciting racing of the season but with so much on the line this weekend, we should see more teams gambling to steal a trip to Victory Lane. The Gander RV 400 can be seen Sunday at 3 p.m. ET on NBCSN.

William Byron won the pole for the Pocono 400 in June. He led 25 laps to start the race before falling back in the pack. The young driver finished 9th. Kyle Larson used strategy (He stayed out while most of the leaders pitted before the end of the Stage) to led 35 laps and win Stage 1 and Stage 2. Martin Truex Jr. had a fast car but it blew up as the No. 19 fought the No. 18 for the lead. In the end, Kyle Busch held off Brad Keselowski to win for the 3rd time in the last 4 races at Pocono.

After the June race at the Tricky Triangle, Kyle Busch said, “Fast cars are fast cars regardless of the aero package. The 2019 package was designed to bunch up the field, encourage passing, and prevent the leader from running away. At Pocono it did the exact opposite. Today I was told I had an 8 second lead, the field was completely spread out, and passing was next to impossible. The package won’t work well everywhere and this is one of the tracks where we need a change.”

The drivers I expect to dominate the race Sunday include: Kyle Busch, Martin Truex Jr., Chase Elliott and Kevin Harvick

Keep in mind how important track position was in the June race. Most of the drivers where complaining about how hard it was to pass at Pocono in the 550 HP engine, higher down-force aero package. All of the drivers who finished in the top 10 started the race in the top 13. The drivers who finished in the top 10 average 1.6 place differential points. That means… where a driver started the race, dictated where he finished the race. It will be more difficult to score place differential points Sunday unless some of the big name drivers fail inspection and start at the back of the field.

I will post my final DraftKings picks no later than Saturday evening.

The Fantasy Live picks were performing well until Kyle Larson got loose and spun into the wall. All of the drivers were running in the top 10 and the picks scored a lot of Stage points. Taking Larson out of the Garage to replace Martin Truex Jr. was a mistake. At least we have an extra allocation with Truex that we can now use at Watkins Glen. Overall it was not a good race. The picks fell outside the top 99% for the first time since Dover. We still have six races to make up some ground on our competition.

*Pick for the Pole*: Our pick for the pole needs to be in before qualifying at 4 ET Saturday. My pole pick will be posted after the final practice Saturday (Noon ET).

Martin Truex Jr. (3): Truex Jr. had one of the fastest cars in the first race at Pocono. He was battling Kyle Busch for the lead when his engine exploded. It is rare for Joe Gibbs Racing to have engine failure and I do not expect it to happen again. I saved an allocation with Truex last week by putting him in the Garage. I will use him Sunday to try and get back the points I lost to the competition.

Chase Elliott (3): Pocono ranks as the 4th best track for Elliott and he had another solid race at the Tricky Triangle in June. Elliott qualified 12th and finished 4th. He has finished 6 of his 7 races at the track in the top 10. Elliott only has one finish in the top 15 and no finishes in the top 10 since the first race at Pocono. He is in a slump right now but a trip to Pocono should cure his woes. I will watch him in practice to see how he looks, but for now the No. 9 car has a spot in my lineup.

Denny Hamlin (3): Hamlin has been very good on the flat tracks this season. He had a good chance to win last week at New Hampshire. The No. 11 car will have another good chance to get to Victory Lane Sunday. Hamlin qualified 6th and finished 6th in the first race at Pocono. I expect him to qualify in the top 10, lead some laps and score a lot of Stage points Sunday.

Erik Jones (7): Jones looked really good last week at New Hampshire and he should run well at the flat track at Pocono. Jones qualified 4th and finished 3rd in the first race at the Tricky Triangle. He has finished 3 of his 5 races at the track in the top 5. Jones needs points as his team battles for a playoff spot. I expect Jones to have a good day in Fantasy Live Sunday.

My Garage Driver this week will likely be Daniel Suarez (5). Pocono ranks as the 2nd-best track for Suarez. He has finished 3 of the last 4 races at the Tricky Triangle in the top 8. Suarez qualified 9th, scored Stage points in both Stages, led 9 laps and finished 8th. I will gladly take a repeat performance from the No. 41 car Sunday. Suarez needs points and Pocono is an easy track to use pit strategy to steal Stage points and put your driver into a position to win. I expect a good Fantasy NASCAR day for Suarez this week.

Pick for the Pole: William Byron