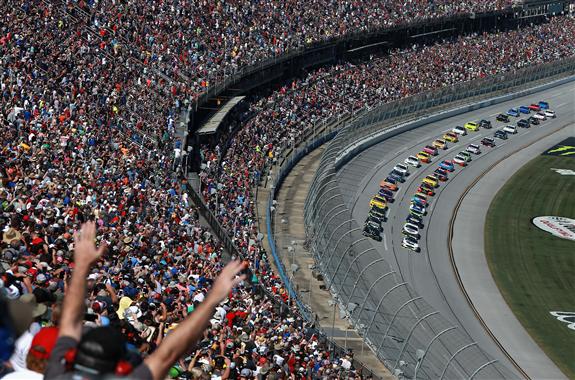 The Monster Energy NASCAR Cup Series will take a week off before traveling to Talladega Superspeedway for the Geico 500. It is a new era for NASCAR at Talladega. The restrictor-plates are gone. The cars will run the 550 HP engines with the 2” splitter, 8” spoiler and aero ducts. NASCAR hopes this provides better racing for the fans. We will see how it all plays out. The race can be seen Sunday at 2 p.m. ET on Fox.

It will be a unique schedule for the MENCS this week. There will be two practices Friday. The first practice will be Friday at 1:35 p.m. ET (No TV). Final practice is Friday at 4:35 p.m. ET (FS1). Qualifying will be Saturday at 4:40 p.m. ET (Fox). There will be no Garage Talk Notes this week since practice speeds do not mean much at Talladega and the information from the garage is limited.

Kurt Busch won the pole for last race at Talladega and he had a very fast car. Busch led 108 of the 193 laps, won Stage 1, finished third in Stage 2 but he ran out of gas while leading the race on the last lap.  Five other drivers were able to score Stage points in both Stages. They include Aric Almirola (14 points), Kevin Harvick (18 points), Clint Bowyer (18 points), Denny Hamlin (9 points), Joey Logano (8 points) and Ryan Blaney (10 Stage points). The Stewart-Haas Racing cars dominated this race. Aric Almirola was the driver who was able to conserve fuel the best and win the race.

The people who have been following my DraftKings picks for a while know that I have the most success at the restrictor-plate races. It is not very hard to select a winning lineup in these races, but most people do not have the guts to do it. You MUST select at least 5 drivers who start outside the top 20 and most likely outside the top 25. Do not worry about their names on the windshield. David starting in the back has just as good of a chance of winning as Kurt Busch starting on the pole.

Also, do not be afraid to leave a LOT of salary on the table this week. I often leave over $500 off my team because I do not need the top drivers in this race. I need the drivers who start in the back who have some history of running well at the Superspeedways.

There are only 188 laps in the race Sunday. That means there are 47 points available for leading laps and 94 points available for fastest laps. The trend at Talladega is to have 6 drivers lead most of the laps and the fastest laps are spread throughout the field. Even Landon Cassill will score fastest laps Sunday because the back of the pack usually gets pulled along in the draft. We do not need dominators this week because the driver who leads the most laps will likely score 10 or less bonus points. It is a lot easier to score the place differential points at Talladega.

It will be important to save allocations in Fantasy Live this week but I am not go crazy and selecting all of the drivers from lower funded teams. There are drivers from the top teams who have had a lot of success at Talladega and they may not get used 10 times this season in Fantasy Live. Those are the drivers I will be focusing on Sunday. I will also be using a lot of Fords in my lineup. You need friends at this track and the Ford drivers seem to work better together than the other teams.

*Pick for the Pole*: Our pick for the pole needs to be in before qualifying at 4:30 p.m. ET Saturday. My pole pick will be posted after the final practice Friday (6 p.m. ET).

Brad Keselowski (7): I had Keselowski penciled in for a start at Richmond but I decided to leave him in the garage. That gives me an extra allocation with the No. 2 car so I will use Keselowski this week. He has a series-high 5 wins at Talladega and he has won Stages in 3 of the last for races at the track. Keselowski will be up front leading the pack Sunday.

Clint Bowyer (7): I watched the two Talladega races from last year during the off week. No organization worked as well together as Stewart-Haas Racing. Their four cars qualified up front and dominated most of the race in October. There is no reason for them to use any other strategy this week. I want as many SHR as possible this week and it will start with Bowyer. He finished 2nd in the last race at Talladega.

Aric Almirola (8): Almirola is one of the best picks in the field this week. He has a series-best 4.25 average finishing position since 2016 at Talladega. Almirola has finished 5 consecutive races at this track in the top 8. That includes a trip to Victory Lane last October. He is also good at running up front so that means a lot of Stage points. I will pair Almirola with his Stewart-Haas Racing teammates this week.

Ricky Stenhouse Jr. (8): Wrecky Stenhouse will be doing his thing this weekend. Driving aggressively to stay up front. Sometimes he wrecks half of the field but who cares as long as you have him in your lineup, and he is not involved (The No. 17 car usually causes the wrecks, so he is not involved in the wrecks). Stenhouse has the 2nd-best average finishing position (8.75) and a win at Talladega over the last two seasons. He finished 3rd and 5th in the two races at the Biggest and Fastest Track on the circuit last year. This is a great week to use an allocation with Stenhouse.

Paul Menard (6): I am going to try and squeeze out a start with Menard this week. I expect the No. 21 car to spend a lot of time with the Team Penske cars up front. That means Stage points and a possible top 10 finish. He finished 5th in Stage 1 and won Stage 2 in this race last year. Menard has finished 6 of the last 8 races at Talladega in the top 13. This is one of the best tracks for Menard so we need to take a chance with him.

My Garage Driver this week will likely be Daniel Suarez. He is not the best Superspeedway driver in the field but he does not need to be. All Suarez needs to do is line up behind Kevin Harvick, Clint Bowyer and Aric Almirola and follow them to the checkered flag. That is exactly what I think he will do this week. I will have Suarez in the garage and if the SHR cars are dominating the race at the end of Stage 2 (like they were last year), I will put Suarez into my starting lineup.

Pick for the Pole: Kurt Busch