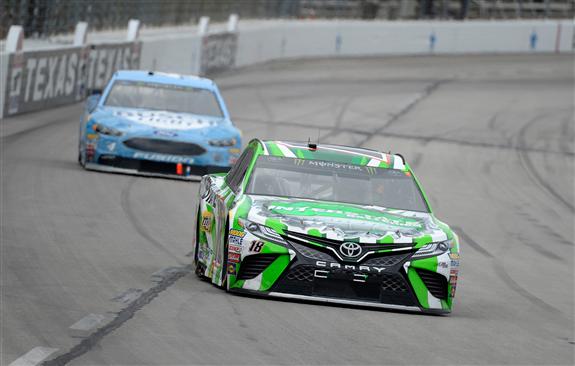 It will be back to a normal schedule for the MENCS this week. The first practice will be Friday at 3 p.m. ET and qualifying will be at 6:30 p.m. ET (FS1). There will be two practices Saturday for the teams to dial in their cars. The first is at 9 a.m. ET and final practice is at 11:30 a.m. ET. Our lineups must be set by 7 a.m. ET Friday. Do not forget.

Ryan Blaney won the pole for the last race at Texas. He led 40 laps and finished second. Kevin Harvick took over the race halfway through Stage 1. Harvick won both Stages, led 177 laps and won the race. Joey Logano also ran well and Kyle Busch had problems with loose wheels throughout the race. The No. 18 team will not be bringing the same tire changer to the track this week.

Most NASCAR teams prepare their cars for the west coast swing before the season begins. The cars for Texas are prepared using information gathered from the race at Atlanta and the three races on the west coast. Typically we see some teams make an improvement in the Texas race from where they were running to start the season. That is what I expect from Stewart-Haas Racing this week.

SHR was the top team in 2018 but they got off to a slow start in 2019 (based on their standards). Crew chief Rodney Childers told SeriusXM NASCAR Channel before the race at Auto Club, “We know where we are losing the speed but our cars for the west coast are already prepared. We cannot make the changes we need to now because the cars are already on the hauler and heading to the track. We will make the changes when we get back to Concord (North Carolina) and be ready to go in the race at Texas.” We need to keep an eye on the SHR cars in practice. They could be back to their dominating ways.

Everything is bigger in Texas and that includes the races. The O’Reilly Auto Parts 500 is 100 miles longer than a typical race on a 1.5-mile track. That means there will be 334 laps instead of the typical 267 laps on most intermediate tracks. There will be 50 additional dominators points available and that will increase the value of the drivers who lead laps Sunday.

The O’Reilly Auto Parts 500 will have 83.5 points available for leading laps and 167 points available for fastest laps (250.5 total dominator points). The trend at Texas is to have one main dominator who leads around 130 laps, another dominator who leads 80 laps and two sub-dominators who leads 56 and 40 laps each. Clean air is really important at this track. The drivers who lead the race typically score 80% of the fastest laps, so the dominators score a lot of points in this race.

The drivers I expect to be the top dominators this week are: Kyle Busch, Kevin Harvick, Martin Truex Jr., Brad Keselowski and Joey Logano

The drivers who could be the top value picks (Under $9K) for the race Sunday include: Aric Almirola, Erik Jones, Ricky Stenhouse Jr. and Daniel Suarez

The drivers I expect to be the best cheap drivers (Under $7K) for the race Sunday include: Daniel Hemric, Chris Buescher, David Ragan and Ty Dillon

I had my worst week of the season at Martinsville. I decided to keep Joey Logano in my starting lineup and he burned me. The No. 22 car had the pole and led 384 of 500 laps in the last race at Martinsville and last week he laid an egg. At least I was able to save an allocation with Kyle Busch by leaving him in the garage. The race at Texas should be more predictable.

*Pick for the Pole*: Our pick for the pole needs to be in before qualifying at 6:30 p.m. ET Friday. My pole pick will be posted after the first practice Friday (4 p.m. ET).

Kyle Busch (7): Busch has been on fire this season. He has finished 3rd, 1st, 1st and 3rd in his last 4 races. It is hard to fade a driver running this well. Texas is not his best track but Busch has had some success in the Lone Star State. He won the spring race in 2016 and went back to Victory Lane at the track last year. I expect Busch to be up front, scoring a lot of Stage points and finish in the top 3 Sunday.

Kevin Harvick (7): Rodney Childers told SiriusXM NASCAR radio before the race at Auto Club, “We know what we need to get the speed we had last year but all of our cars for the west coast are already prepared. We will make the changes for Texas and begin to get back to the dominance we had in 2018.” Sounds good to me. Harvick has finished 1st, 2nd and 1st in the last 3 races at Texas. I would not be surprised if Harvick won his first race of the 2019 season this week.

Martin Truex Jr. (8): Truex has not been to Victory Lane since the race at Kentucky last year but he has been close. Truex finished 2nd at Atlanta and 2nd at Phoenix so the No. 19 team knows how to get speed out of the current aero package. Truex always runs well at the 1.5-mile tracks. I expect him to score a lot of Stage points and finish in the top 5 Sunday.

Ryan Blaney (8): The faster the track, the better Blaney performs. The No. 12 car almost won the last race at Texas. Blaney won the pole, led 40 laps and was chasing down Kevin Harvick at the end of the October race at the track. Blaney finished 5th at Auto Club using this aero package so the No. 12 team has had speed this year. I expect Blaney to finish in the top 10 Sunday.

Joey Logano (6): When you get bucked off a horse the best thing to do is to climb back on. Last week Logano burned us and I am not afraid to use him again. Logano has a 4th-place average finishing position in the last 6 races at Texas. He has also been very good on the intermediate tracks using the current aero package. Logano won at Las Vegas (the most similar track to Texas) and finished 2nd at Auto Club. Logano should score a lot of Stage points and finish in the top 5 at Texas.

My Garage Driver will likely be Brad Keselowski (7). Texas is not a very good track for Keselowski but he is running so well right now that we have to at least have him in the garage. Keselowski won at Atlanta, finished 2nd at Las Vegas and 3rd at Auto Club using the current aero package. He should be a good insurance policy to have available Sunday.