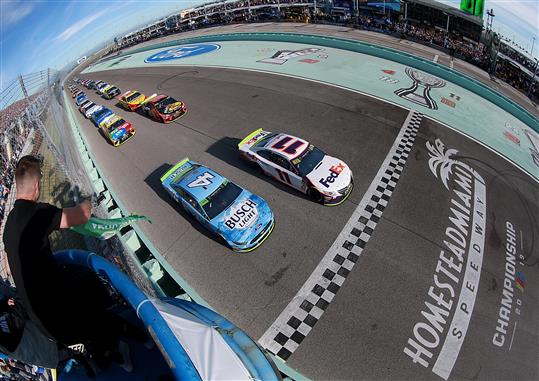 The races at Homestead always come down to critical pit stops in the final laps of the race. Will we see the same Sunday? The four drivers competing for the championship always get a lot of room on the track in November. That will not be the case this week. I expect a lot tighter racing but the pit crews will also factor into who goes to Victory Lane at Homestead. We are going to need some fast drivers and a little luck for our lineups this week. The Dixie Vodka 400 can be seen Sunday at 3:30 p.m. ET on Fox.

The race at Homestead is 267 laps in length (400.5 miles). That means there are 66.75 points available for leading laps and 133.5 available for fastest laps. The trend at Homestead over the last four years is to have two main dominators and one sub-dominator. That means two drivers typically lead 90-100 laps each and another driver leads 34-45. We will need at least two dominators in our lineup Sunday and pair them with drivers who can score some place differential points.

Stats from Intermediate Tracks in 2020 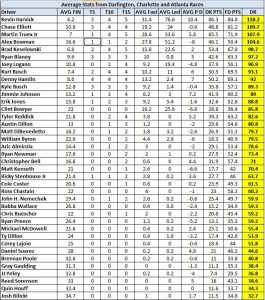 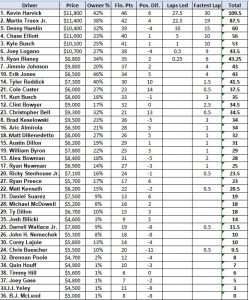 * The number in front of the driver is his projected finishing position.

Kevin Harvick: The stats suggest the No. 4 car will lead the most Sunday. Kevin Harvick has led a series-high 542 laps on the intermediate tracks this season. That is 148 laps more than any other driver in the series. He is also good at leading laps at Homestead. Harvick has led at least 40 laps in all but one of his races in Miami while driving for Stewart-Haas Racing. He also has not finished outside the top four since 2013. It is a good idea to pay up for Harvick for this race.

Kyle Busch: Joe Gibbs Racing started the season a bit behind the Fords and Chevy’s on the speed chart. That changed at Atlanta. The team found what they were looking for and I expect their cars to be up front Sunday. Kyle Busch has led an average of 60 laps in every race at Homestead since 2016. The No. 18 car will likely be fast again at Homestead.

Martin Truex Jr.: Martin Truex Jr. has a great chance to dominate the race Sunday. The No. 19 car led 87 laps at Charlotte and 65 laps at Atlanta. They are slowly finding more speed for this car. Truex led 103 and finished second at Homestead last November. He could easily do it again Sunday.

Joey Logano: Joey Logano probably will not lead the most laps Sunday but the No. 22 car could easily lead 25-30 laps. Logano led 54 laps at Las Vegas, 42 at Charlotte and 10 at Atlanta. Logano is a better pick to dominate the race when he starts up front at Homestead. He led 80 laps from the pole position in 2018. The No. 22 car starts second Sunday so Logano will have the track position he needs to be a dominator in this race.

Denny Hamlin: Denny Hamlin starts on the pole at Homestead…AGAIN! He has started on the pole in four of the last five races at this track. He has only led 42 laps in those four races (and 40 of them came in the 2018 race)… not good. I will only have Hamlin in a few lineups Sunday.

Christopher Bell: DraftKings has been waiting until the field is set before they post the driver’s prices. Each week they inflate the drivers who start in the back’s price. This week it is Christopher Bell. The No. 95 car starts 36th, so he is an excellent pick but Cole Custer was much better at this track in the Xfinity Series and he is $3,300 cheaper. I will have some shares of Bell in my lineups, but more Custer.

Matt DiBenedetto: The No. 21 car has been pretty consistent this season. Matt DiBenedetto finished second at Las Vegas, 14th and ninth at Darlington, 17th in the first race at Charlotte and 15th the second race at Charlotte. His stats at Homestead are nothing to write home about, but do not worry about him. His car will be fast enough to move up 8-10 spots Sunday.

Tyler Reddick: The good news is that Tyler Reddick is the best value in the field this week. The bad news is that he will be highly owned. Homestead is by far his best track. He won the last two Xfinity Series races at the track. I will use Reddick in all Cash and Single-Entry Tournament Contest lineups.

Ricky Stenhouse Jr.: The No. 47 car could be sneaky good this week. Ricky Stenhouse Jr. must have learned something from Ryan Newman last year because his results have been similar to what we have seen from the Rocket Man in the past. Stenhouse runs around the 20th position the entire race and then the final results come out and Stenhouse is in the top 15. He finished fourth at Charlotte and 13th at Atlanta so he is on a bit of a hot streak.

Erik Jones: DraftKings must hate Erik Jones. This is the third week he has been priced in the $6,500 range. I know his results have not been very good lately, but Jones did have the second best car at Homestead last November. Jones finished third in that race and I will gamble that he can do it again.

Austin Dillon: I wish Austin Dillon did not have so many question marks entering this race. As far as I know, his wife has not had their baby yet so AJ Allmendinger will be on standby to drive the car. Dillon also has questions about his health after being lifted from the car Wednesday night. Homestead is his best track and if he is good-to-go, I will have a lot of shares of the No. 3 car.

Cole Custer: I really like Cole Custer Sunday. Homestead is his best track and he would be a two-time Xfinity Series Champion if Tyler Reddick wasn’t slightly better. Custer finished first, second and second in his last three Xfinity Series races at Homestead. That includes an average of 97 laps led in each race. He should be able to move up many spots from his 35th starting position.

Ryan Preece: Ryan Preece starts 33rd and he should move up 8-10 spots in the race. Preece finished 20th at Darlington, 22nd at Charlotte and 26th at Atlanta. Preece finished 25th in this race last year and his car has more speed then it had in 2020.

Michael McDowell: Michael McDowell said on SiriuxXM NASCAR Radio this week, “Not having practice has played into our hands (Front Row Motorsports) this year. It takes the larger teams some time to dial in their cars and we are able to keep up if we unload right.” McDowell starts 30th and he has a 23rd place average finishing position on the intermediate tracks this season. Not bad value for $5,200.