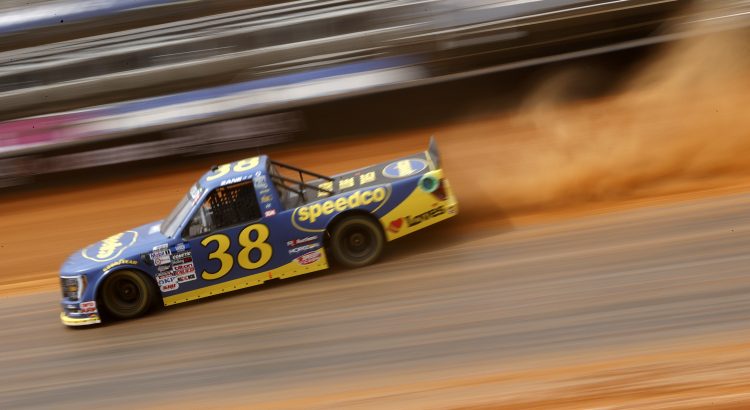 The NASCAR Camping World Truck Series will play in the dirt Saturday night. This is the series where recent dirt races all began. NASCAR took the Truck Series to Eldora Speedway starting in 2013 and now the Bristol Dirt Race takes the place of the summer Eldora Race (I am not a big fan of that decision). The trucks usually put on a better show on dirt than the stockcars, so this should be a pretty good race.

Just like last year, some of the Cup Series stars will step down to the Truck Series to get some practice playing in the dirt. The race was dominated by Martin Truex Jr. last year (he led 105 of the 150 laps). Now we get to see what Chase Elliott, Joey Logano, Austin Dillon and Harrison Burton can do in their trucks.

The strategy for this race is not too difficult. Select the best drivers who are good on dirt or try to fit as many on the Cup Series drivers into your lineup as possible. Martin Truex Jr. led 105 of the 150 laps and scored 53 fastest laps in this race last year (50.1 dominator points). Passing the leader was extremely tough last year and I expect the same Saturday night. This race could easily end up as a one dominator race. My strategy will be to select as many drivers I can who have a good chance to finish in the top-12.

The Truck Series had two practices Friday at the Bristol Dirt Race. The field was then set Saturday evening through the heat races. The driver’s performance in the heat races is more important than the speed the truckers had on the track in practice. It never hurts to check out the practice speeds though, so here are the speeds from Friday’s practice…. 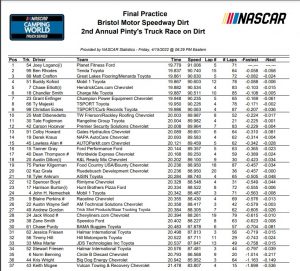 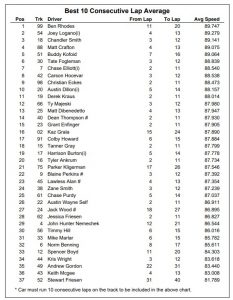 JOEY LOGANO $10,900: Logano will be behind the wheel of the No. 54 truck for Team DGR. Todd Gilliland drove this truck to a fourth-place finish in this race last year. Now we get to see what Logano can do. You would think Logano should be able to dominate this race. He won the Cup Series race at the Bristol Dirt track last year.

CHASE ELLIOTT $10,700: Elliott will be behind the wheel of the No. 7 truck Saturday night. This will be the third race in a row that a Hendrick Motorsports driver has been in this truck. Alex Bowman drove it at COTA and William Byron won at Martinsville last week in this truck. Now it is Elliott’s turn to see what he can do. Elliott has been working with Kyle Larson on his dirt track racing skills. He has enough talent and his truck should be fast enough to finish up front Saturday night.

STEWART FRIESEN $10,400: Friesen is the best dirt track driver in the field. He has a background in dirt track racing and has had a lot of success on dirt. He won at Eldora in 2019 and finished his last three races at the track in the top-three. Friesen was pushed around be Kyle Larson in this race last year and it caused him to finish 12th. I expect Friesen to finish in the top-five Saturday night.

GRANT ENFINGER $9,800: Enfinger is a dirty racer and I mean that in a good way. He has competed in three races at Eldora Speedway. He finished 3rd, 2nd and 4th in those races. Enfinger also finished 3rd at Knoxville and 6th in the Bristol Dirt Race last year. I will have lot of shares of Enfinger Saturday night.

BEN RHODES $9,500: Rhodes is not known as a “dirt track expert” but he has had some success on dirt in the Truck Series. Rhodes started ninth and finished second in the Bristol Dirt Race last year. I am not sure Rhodes can win, but he should be able to finish in the top-10 in this race.

BUDDY KOFOID $9,300: Kofoid will be behind the wheel of the No. 51 truck for Kyle Busch Motorsports Saturday night. This is the same team that Martin Truex Jr. destroyed the field in the Bristol Dirt Race last year. Kofoid is one of the young stars in open-wheel racing. He is the defending USAC National Midget Series. At age 14 Kofoid won the dirt race at the Thunderbowl Raceway in California. Some people say he is the “next Kyle Larson.” Those are big shoes to fill. I doubt he will compete for a win Saturday night but he has the talent and his KBM Truck should have the speed to finish in the top-10.

AUSTIN DILLON $9,100: Dillon has experience racing on dirt and Saturday night he will behind the wheel of the No. 20 track for Young’s Motorsports so he can get some more experience. Dillon won the dirt race at Eldora in 2013. He also finished 6th (2015) and 10th (2014) in his other two races at Eldora. Now we will get to see what Dillon can do on dirt at Bristol. I expect Dillon to finish in the top-10 and compete for a top-five finish Saturday night.

MATT CRAFTON $8,900: Do you want a safe pick for your DFS lineup tonight? Crafton is your driver. He competed in all seven of the races at Eldora and he has never finished outside the top-10. Crafton also finished 6th at Knoxville last year and 14th at the Bristol Dirt Race. He should be a good pick for a top-10 finish this week at Bristol.

HARRISON BURTON $8,200: Burton will be behind the wheel of the No. 17 truck for Team DGR. He only has one race on dirt in the Truck Series on his resume. He started 11th and finished 31st at Eldora in 2019. Not good. Burton is a low floor, high ceiling driver for this race. I only like him for Tournament Contests because he should be the lowest owned of the Cup Series drivers. I will take a few chances with Burton Saturday night.

PARKER KLIGERMAN $7,400: Kligerman has never competed in the Truck Series race at Eldora and he did not compete at Knoxville last year. He did run the race on the dirt at Bristol and he had some success. Kligerman started 16th and finished 8th. He probably will not compete for a win, but Kligerman had top-10 upside Saturday night.

AUSTIN W. SELF $6,700: Of course Austin Wayne Self is in my list of core drivers. He is always one of the best value picks and that should be the same for the Bristol Dirt Race. He has three races at Eldora on his resume and his average finishing position is 13th. AWS started 17th and finished 10th in the Bristol Dirt Race last year. I will have a lot of shares of AWS Saturday night.

TIMMY HILL $5,900: Austin W. Self and Hill are always my go-to-drivers in the Truck Series. They are usually cheap and they always score positive place differential points. I do not know what I am getting with Hill this week though. He has never competed in a dirt track race in the Truck Series. He was awesome in the I-Racing Series on dirt, so that has to mean something, right? I will take a few chances with Hill at Bristol.

ANDREW GORDON $4,900: Gordon will drive the truck for G2G Racing this week. This is the same truck Johnny Sauter finished second in last week. Gordon is a dirt track ringer who has competed in two races in the Truck Series on dirt. He started 40th and finished 31st in the Bristol Dirt Race last year. He also started 29th and finished 24th at Knoxville. His is the minimum price so if he can race like he did last year, Gorgon will return value.

SPENCER BOYD $4,800: Boyd will be driving for Young’s Motorsports. He is teammates with Austin Dillon and Kaz Grala. The only difference between his truck and his teammate’s trucks is that Boyd did not wreck his truck in practice. He should be fast enough to finish in the top-20 tonight. 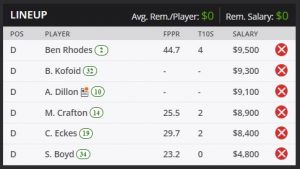 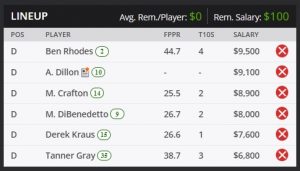 * The drivers I listed in my Core Drivers above will be the popular drivers for the race tonight. I like all of these drivers, but I will be building some lineups in Tournament Contests where I pivot away from Joey Logano, Chase Elliott, Austin Dillon, Stewart Friesen and Grant Enfenger. I will use some drivers who were fast in practice and have a lot less ownership. 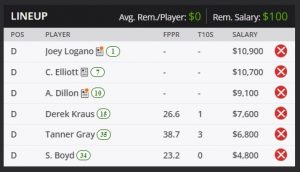 *This lineup will be popular but should be good for Single-Entry Tournament Contests.