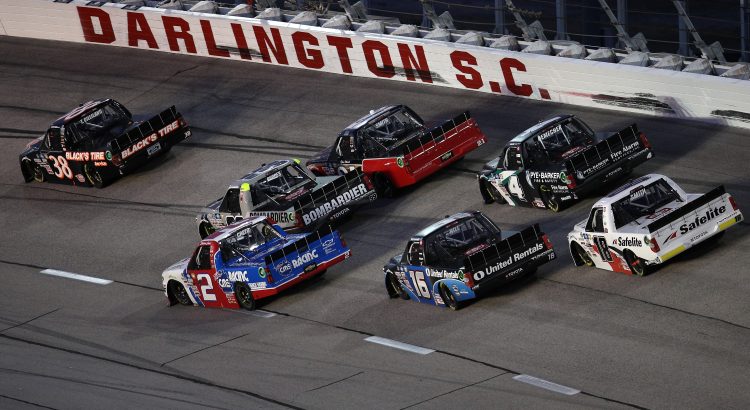 The NASCAR Camping World Truck Series will be back this week after a few weeks off. The truckers will join the Xfinity and Cup Series in throwback weekend at Darlington Raceway. This is a tough track for the Cup Series drivers to tame so naturally the truckers will have a difficult time navigating this egg-shaped, high-banked, 1.36-mile track. The Dead on Tools 200 can be seen at 8 p.m. ET Friday on FS1.

The field is stacked for the race at Darlington. The top truckers (John H Nemechek, Chandler Smith, Ben Rhodes, Grant Enfinger, Stewart Friesen, Matt Crafton, Zane Smith and Carson Hocevar will be joined by Ross Chastain, Ryan Preece, Todd Bodine and Parker Kligerman this week. That is a lot of talented drivers to choose from.

Here are the practice speeds from Friday’s practice at Darlington… 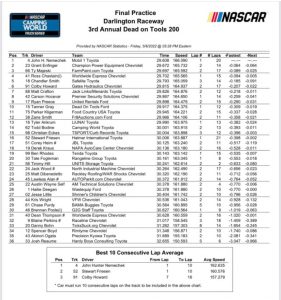 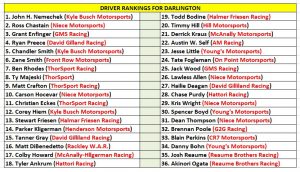 JOHN H. NEMECHEK $11,200: Nemechek dominated both races at Darlington last year. He started on the pole, led a race high 65 laps and finished 8th in the spring. He started 6th, led 39 laps and finished 2nd in the fall. Nemechek has not been as good this year as he was in 2021, but his truck should be fast enough to score some dominator points and finish in the top-five.

ROSS CHASTAIN $10,900: Ross Chastain has been on fire in the Cup Series. He has been pretty good when he gets behind the wheel of a truck too. Chastain will be driving the No. 41 truck for Niece Motorsports. He drove this truck at Atlanta and finished 23rd because of a flat tire. He should be one of the best in the field tonight, so Chastain will be one of my dominators for the race.

BEN RHODES $10,600: Rhodes has been really good at Darlington. He started 5th and won the race at “The Track Too Tough to Tame” in 2020. He came back last year and started 4th, led 34 laps and finished 2nd. He will have momentum after his win in the last race (Bristol) and Rhodes has the best average finishing position in the series this year (6.9).

RYAN PREECE $10,000: Preece will be behind the wheel of the No. 17 truck for DGM. He drove this truck twice this year. He started 5th and finished 4th at Las Vegas and Preece started 11th and finished 7th at Atlanta. He has never driven a truck at Darlington but his does have 6 starts in the Cup Series at the track on his resume. Preece should be able to finish in the top-10 tonight.

CHANDLER SMITH $9,800: Smith has been the best driver in the Truck Series this year from the drivers who competes fulltime in the series. He has a wins (Las Vegas) and he finished 4 of the 6 races in the top-10. The Kyle Busch Motorsports trucks have had a lot of speed this year so I expect Smith to run up front tonight.

STEWART FRIESEN $9,300: Friesen is have a good season. His 8.6 average finishing positions this year is 3rd best in the Truck Series. He has 3 races at Darlington on his resume. He finished 8th in 2020 and 3rd in the September race last year. His engine blew up in the May race last year, so that was not his fault. Friesen should be a good pick for a top-10 finish tonight.

GRANT ENFINGER $9,100: Enfinger is about the safest pick in the field tonight. He has three starts on his resume at Darlington. Enfinger finished 4th, 5th and 6th in those races. Enfinger enters the race with 3 consecutive top-10 finishes. He should be able to make it 4 in a row tonight.

MATT CRAFTON $8,700: Darlington is an old track so why not use an old driver for our lineups? OK, maybe Crafton is not that old. He is younger than me. Crafton 9 starts at Darlington on his resume. That experience should go a long way this week. His average finishing position in those 9 races is 8.7. Not too bad. Crafton should finish in the top-10 again tonight.

PARKER KLIGERMAN $8,500: Kligerman will be back behind the wheel of the No. 75 truck for Henderson Motorsports. Kligerman drove this truck in 4 races this year. He has two top-5 finishes and two finishes outside the top-15. Kligerman started 34th and finished 5th at Darlington last year. He will be a good pick for a top-10 finish tonight.

CHRISTAIN ECKES $8,300: Do not forget about Eckes tonight. He only has one race at “The Lady in Black” on his resume, but it was a good one. Eckes started 19th and finished 5th at Darlington in 2020. That was in a Kyle Busch Motorsports truck. Now we get to see what he can do in his Thorsport Racing Toyota tonight. I think he will be good.

TODD BODINE $7,400: Bodine will be back in the Truck Series tonight. He will be driving the No. 62 Truck for Hallmar Friesen Racing. This truck comes some the same garage as Stewart Friesen’s truck so it should have some speed. Bodine drove this truck at Las Vegas. He started 23rd and finished 21st. His truck had more speed than his 21st-place finish suggests. I would not go crazy with your shares of Bodine tonight, but I would not completely fade him because experience is important at this track.

AUSTIN W. SELF $6,600: Of course Self in listed in my Core Drivers. He is always one of the best values in DFS. AWS has 3 starts at Darlington on his Truck Series resume. His average finishing position is 13th. AWS started 12th and finished 9th in this race last year. I will have a lot of shares of AWS tonight.

TIMMY HILL $6,400: Hill is another one of my go-to-drivers in DFS contests. His average starting position is 26th and his average finishing position is 20th in his 6 races this year. Those stats will not win you your contest, but it will not lose you any money either. Hill will be a good value pick for your lineups tonight.

COLBY HOWARD $6,200: Howard is starting to find his groove in the Truck Series. He finished the last two races in the top-18 and he is averaging 32 DraftKings Points in those races. Not bad for $6,200. Howard looked good in practice. He posted the 6th fastest speed and made some long runs. I will take a chance with Howard tonight.

JESSE LITTLE $5,200: Little will be behind the wheel of the No. 02 truck for Young’s Motorsports. This is his first ever race at Darlington, so that scares me. Little was decent in practice and he did say he liked his truck. I will take a few chances as a punt play with Little tonight. 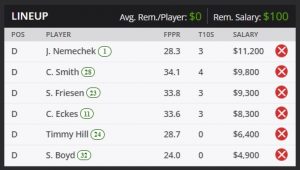 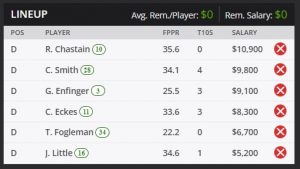