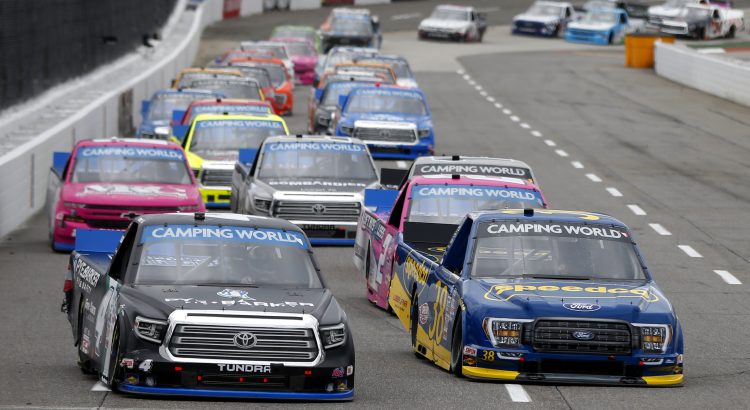 The NASCAR Camping World Truck Series will kick off three nights of racing under the lights at Martinsville Speedway. The Trucks will compete Thursday night at 8 p.m. ET on FS1. The Xfinity Series will be on the track Friday night and the Cup Series will race Saturday night. Martinsville always puts on a good show so this should be fun to see these truckers beat and bang on each other at this short track.

The Truck Series race will likely turn into the “Kyle Busch Invitational” Thursday night. The DraftKings contests suck tonight. Busch is going to be at least 70% owned and his high price is going to cause a lot of duplicated lineups. I am not going to play any Cash Contests because everyone will have Busch and most of the same drivers. The Tournament Contests will also be difficult to win because the top score will likely have to split the pot with 20 other players. I plan to save my bankroll for the Xfinity Series and Cup Series races.

There 200 laps (105 miles) in the race tonight. That means there are 50 points available for leading laps and 90 points available for fastest laps. We must capture as many of these points as possible. The most likely driver to capture these points is Kyle Busch. He ran the No. 51 Truck at Martinsville in 2019. Busch led 174 of the 200 laps, scored 74 fastest laps and won the race (122.8 DK Points). In 2016 Busch led 123 laps and scored 41 fastest laps on his way to Victory Lane (95.2 DK Points). Busch is going to be the highest owned driver in your contests tonight, but you will not win any money if he scores 125 DK Points and you fade him. This race is going to require us to win our contests with the other five drivers in our lineup. I doubt there will be more than one dominator in the race (Kyle Busch). So I will be trying to find drivers who can finish in the top-10 with Busch tonight.

Practice and qualifying was rained out. That means the starting lineup was set “per the rule book.” This opened up a lot of value starting deep in the field. William Byron is almost a lock to Cash Contests since he starts 31st. The young drivers will be hurt, because they did not get any time to practice. The cancelation makes me like Kyle Busch even more tonight. 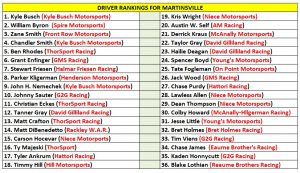 KYLE BUSCH $15,000: I really do not need to write a paragraph about Busch. We all know he is the best driver in the field and has the best truck. There is no reason to fade him tonight.

ZANE SMITH $11,400: Smith has some momentum after his win at COTA. Now he gets to race at a short track where he has had some success at. Smith has run two races in the Truck Series at Martinsville. He led 20 laps and finished third in 2020 and he led 65 laps and won the race last year. It is possible to pair Kyle Busch and Smith in a lineup. I will be playing a lineup with Kyle Busch, Zane Smith, Hailie Deegan, Timmy Hill, Kris Wright and Tate Fogelman because I doubt we will see too many two dominator lineups tonight.

CHANDLER SMITH $10,100: Smith has been the best driver not named Kyle Busch in the Truck Series this year. He won at Las Vegas, finished fourth at Atlanta and fifth at COTA. He only has one race at Martinsville in the Truck Series on his resume. Smith started sixth and finished fourth last year. He did not lead any laps, but I do not expect many drivers other than Busch to lead laps tonight. Smith should finish in the top-five again at Martinsville.

GRANT ENFINGER $10,400: Enfinger has been in a lot of my DraftKings lineups this year and he hasn’t been helping me win any money. He hasn’t run up front as much as I needed him too. It could change tonight. Enfinger won at Martinsville in 2020. He has finished three of his four starts at this track in the top-10. Enfinger should finish in the top-10 again tonight.

WILLIAM BYRON $9,800: Byron will be behind the wheel of the No. 7 truck for Spire Motorsports. Do not be fooled, this truck has full support from Hendrick Motorsports. Alex Bowman drove this truck at COTA and it had a lot of speed. Byron has the talent to compete with Kyle Busch. I will be pairing these two Cup Series stars in many lineups tonight.

MATT DIBENEDETTO $9,500: I have been waiting for DiBenedetto to show these young truckers how to get around these tracks, but so far DiBenedetto has not lived up to the hype. Maybe a trip to Martinsville will be what he needs to finish up front. He finished four consecutive races at Martinsville in the Cup Series in the top-15. You would think that success would translate into a top-10 finish in the Truck Series.

STEWART FRIESEN $9,000: Friesen wasn’t on my radar as one of the top drivers in the Truck Series heading into the 2022 season, but he has been good. Friesen finished third at Las Vegas, sixth at Atlanta and ninth at COTA. He has finished three of his last four races at Martinsville in the top-six. He should be up front competing for a top-five finish tonight.

CHRISTIAN ECKES $8,700: Eckes has had two good races (finished 3rd at Dayton and 6th at COTA) and two not-so-good races this year (finished 28th at Las Vegas and 16th at Atlanta). He has two races at Martinsville in the Truck Series on his resume and one was good and one was bad. Eckes started on the pole and finished 17th in 2019. He started 14th and finished fourth in 2020. Eckes is a risky pick that could pay off in Tournament Contests.

PARKER KLIGERMAN $8,200: I really like Kligerman tonight. He competed in two races this year in the No. 75 Truck. Kligerman finished fifth at Daytona and 19th at Austin (He was running up front for most of the race). He ran the No. 75 truck at Martinsville last year. Kligerman started 30th and finished sixth. He was in the winning lineup in most Tournament Contests. Kligerman will be a good pick again tonight.

TANNER GRAY $7,300: Gray is one of the best value picks in DraftKings tonight. He doesn’t have the popular name, but he has had some success this year and some success at Martinsville. Gray finished eighth, sixth and fourth in his last three races. He started 27th and finished third last year at Martinsville (65 DK Points). He is running too well right night to fade.

JOHNNY SAUTER $7,500: Sauter will be behind the wheel of the No. 13 truck for Thorsport Racing. Sauter is a four-time winner in the Truck Series at Martinsville so he knows his way around this track. He hasn’t been very good the last two years, but he did lead 39 laps in 2020. Sauter has too cheap and he offers a lot of upside so I will have him in some of my lineups tonight.

HAILEY DEEGAN $6,300: I wasn’t planning on playing Deegan tonight but then qualifying got canceled. As a result, Deegan will start 31st tonight. She finished 19th in her first race at Martinsville last year. She will easily return value if she has a similar race tonight. I will take a chance with Deegan at Martinsville.

AUSTIN W. SELF $6,400: It would not be a DraftKings article if I did not include AWS. I play him every week and he seldom lets me down. AWS is not going to win you your contest, but he is not going to hurt you either. AWS has an 18th-place average starting position and a 16th-place average finishing position at Martinsville. He starts 22nd  tonight and should finish in the top-15.

TIMMY HILL $6,100: Hill will be in many of my lineups tonight. He has a habit of qualifying poorly and finishing well at Martinsville. Hill’s average starting position at Martinsville is 23rd. His average finishing position is 12th. He starts 20th tonight and should have a good chance to move up 4-6 spots in the race.

KRIS WRIGHT $5,700: Wright has been a decent cheap option for DraftKings contests this year. He only has one race on his Truck Series resume at Martinsville, but it was a good one. Wright started 26th and finished 13th last year (Wright scored 43 DK Points). It is a small sample size but I will take my chances with Wright and see if he can do it again.

TAYLOR GRAY $6,400: Gray was in the winning lineup last year at Martinsville. He started 39th and finished eighth (Gray scored 67 DK Points). It is only one race, but he must have been doing something right to score that well. I will take a chance with Gray and hope he can score half as many points as he did last year. 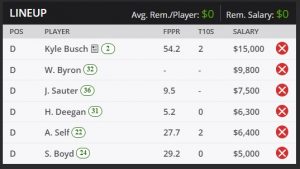 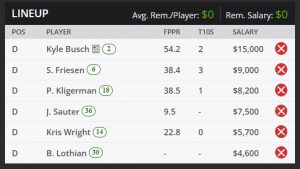