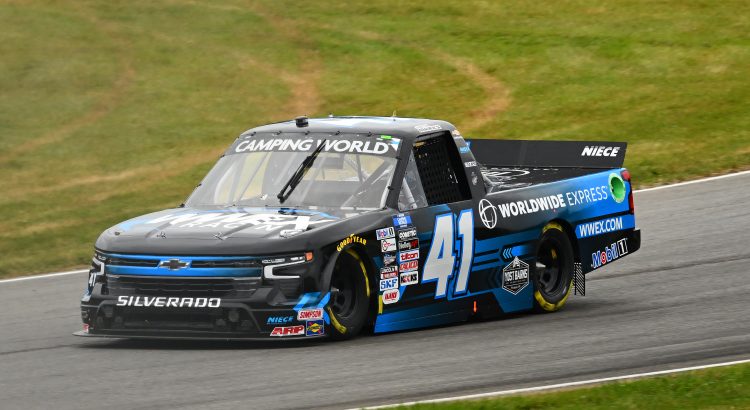 The NASCAR Camping World Truck Series will make the trip to Mid Ohio Sports Car Course. This will be the third race of the 2022 season on a road course for the Truckers (COTA and Sonoma were the other two). This will also be the first time the Truckers have competed at Mid Ohio. That limits the amount of data we have for this race but there is an art form to road course racing. The drivers who are typically good at navigating the road courses should be up front at Mid Oho. The O’Reilly Auto Parts 150 can be seen Saturday at 1:30 p.m. ET on FS1.

We need to focus our picks on finishing position at Mid Ohio. We should win all of our contests if we can find six drivers who can finish in the top-12. It will also help if the drivers score some place differential points on their way to the top 12.

The Truck Series had 20 minutes of practice to dial in their trucks for the race. That is not a lot of time to practice on a 2.4-mile track. The teams were not able to make any long runs, but we did get to see the speed the trucks had before they had their group qualifying session.

The trucks had to put on the rain tires for qualifying since Mother Nature decided to “make things interesting.” The race Saturday is supposed to be dry so the qualifying speed probably will not translate into race speed. Some of the fast trucks did qualify further back than they would have on a dry track, so we need to have these value picks in our lineups Saturday. Some of these drivers include: Zane Smith, Ben Rhodes, Chandler Smith, Ty Majewski, Christian Eckes, Derek Kraus, Kaz Grala and Timmy Hill 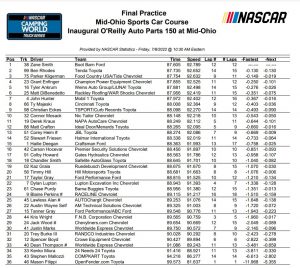 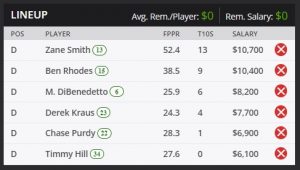 ZANE SMITH ($10,700): Smith has been a beast on the road courses this year and he looks fast again at Mid Ohio. Smith won the race at COTA and he finished second at Sonoma. Now he had the fastest truck in practice and qualified 13th for the race Saturday. Smith should score a lot of place differential points and be the top driver in DraftKings contests.

BEN RHODES ($10,400): Rhodes has been really good on the road courses. He won the road course race at Daytona last year and he finished fourth at COTA this year. Rhodes had the second-fastest truck in practice and he qualified 15th for the race. Rhodes should finish in the top-five with the upside to win the race.

MATT DIBENEDETTO ($8,200): Dibenedetto is too cheap this week. He almost won the Cup Series race at Sonoma a few years ago and he is in a “must win situation” in the Truck Series. DiBenedetto finished 10th at Sonoma last month. He posted the sixth-fastest speed in practice and backed it up with a sixth-place qualifying effort Friday evening. DiBenedetto should be a safe pick for a top-10 finish Saturday.

DEREK KRAUS ($7,700): I will roll the dice with Kraus Saturday. We need drivers who can finish in the top-12 and Kraus has finished four of his last five races in the top-12. That includes a 12th-place finish at COTA. Kraus starts 23rd and he should have a good chance to move up 8-10 positions in the race at Mid Ohio.

CHASE PURDY ($6,900): I doubt many people will be using Purdy in Cash Contests, but I will take a chance with him. Purdy started 22nd and finished 16th at COTA (33 DK Points). He also started 25th and finished 15th at Sonoma (38 DK Points). Purdy starts 22nd Saturday and should have a good chance to score 30+ DK Points again.

TIMMY HILL ($6,100): There are some decent options starting in the back but I will take a chance with the veteran. Hill posted the 20th fastest speed in practice but he got loose on the wet track in qualifying so now he starts 34th. Hill will have a great chance to move up 10+ spots in the race. His ownership will be high enough that even it he crashes, it will not hurt us much. 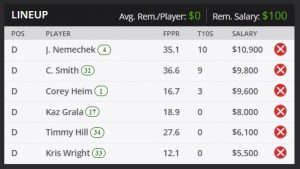 JOHN H. NEMECHEK ($10,900): Will Nemechek get overlooked this week? I still think he will have some ownership, but I expect a lot of people will save some salary to use Zane Smith or Ben Rhodes since they start deeper in the field. Nemechek has a good chance to dominate this race. I will pivot from the more popular drivers and use Nemechek.

COREY HIEM ($9,600): This might be a new track for most of the Truck Series drivers but not for Hiem. He drove the ARCO Menards Series race at Mid Oho last year and nearly won the race. He was leading when he had a penalty and had to drop to the back. Hiem will be driving chassis No. 71 from the Kyle Busch Motorsports fleet. The truck finished second and third on road courses with Kyle Busch behind the wheel and second at Sonoma with John H. Nemechek behind the wheel. Now we get to see what Hiem can do in the truck.

CHADLER SMITH ($9,800): I will stack the Kyle Busch Motorsports trucks Saturday. Smith liked his truck on the dry track in practice but he looked awful on the wet track in qualifying. Smith slide off the track and now he will start 31st. Smith finished fifth in both road course races this year. He will be in the winning lineup if he finishes fifth Saturday.

TIMMY HILL ($6,100): Hill seems to be the “free square” this week. He is very good at tracking car of his truck and staying out of trouble. That is all he has to do at Mid Ohio in order to finish in the top-25 from the 34th starting position.

KRIS WRIGHT ($5,500): I need two cheap drivers to fit four drivers with a chance to score well in my lineup, so I will take a chance with Wright. He started 17th and finished 15th at COTA and Wright started 30th and finished 26th at Sonoma. At least he scored positive place differential points in both races. Wright qualified 33rd and he should move up a 4-6 spots at Mid Ohio.